THE CULTURE Ministry is selling two old buildings belonging to the Slovak National Theatre (SND) to finance the completion of the new SND complex, which still requires Sk900 million (€23.3 million). 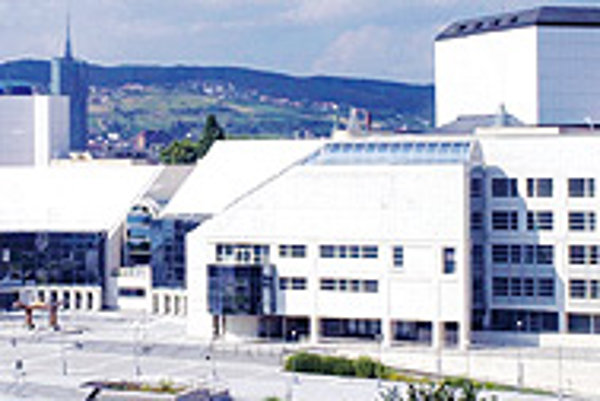 At an August 11 press conference, Culture Minister František Tóth said the sale of SND's drama stage (the PO Hviezdoslav building) and the theatre's headquarters, should be completed by the end of September.

Both buildings are located in Bratislava's historic district. The ministry hopes to vet at least Sk350 million (€9.07 million) from the sale.

The value of the PO Hviezdoslav theatre building, built in 1955, was evaluated at Sk236.4 million (€6.13 million), and the SND headquarters building at Sk115.1 million (€2.98 million). The ministry is listing these values as the minimum sale price but it is likely that the buildings will go for more given the condition of the buildings and their location.

"All private and corporate entities can bid for the properties to be used as they wish. For us, the main deciding factor [in choosing a buyer] will be price offered," the minister said.

The ministry's spokesperson, Martina Pavlíková, told The Slovak Spectator that the Culture Ministry would publish "for sale" advertisements in local newspapers by August 22.

She also said that the Culture Ministry knew of one official bidder so far.

"The Slovak Trade and Industrial Chamber (SOPK) expressed interest in buying the SND headquarters building. Minister Tóth already met with SOPK Chairman Peter Mihók. However, the SOPK, like all other bidders, must keep to the conditions of the sale," she said.

The SOPK wants to purchase the SND headquarters building because of the 100-year-old building's history. Decades ago, it belonged to an SOPK predecessor before it was nationalized by the Communist regime.

Despite the chamber's historical link to the building, the SOPK will not receive preferential treatment in the bidding process.

Pavlíková reiterated that "price will be the decisive factor" in the building's sale.

Mihók told the Hospodárske noviny business daily that the SOPK would get kicked out of the running if price were the sole determining factor.

"We want the building to serve the chamber's purposes. It is horrible to imagine that the building would turn into a casino, for instance. We are not real estate mavens. If the whole process is based on highest bid, we will probably have to leave the bargaining table," the chamber chairman said.

The ministry has not set any conditions as to the use of the buildings once they are sold. The SND headquarters building, however, is a cultural site, and the PO Hviezdoslav building resides in a site-protected area, meaning that some restrictions will come into play.

Eric Assimakopoulos, a US businessman with several real estate projects in Slovakia, may also join the bidding war. According to the SME daily, he is the CEO of a company that is carrying out reconstruction in a building next door to the PO Hviezdoslav building. No official plans with the neighbouring building have been announced, however.

When the cabinet planned to sell the new unfinished SND complex, arguing that the state could not afford to pour more money into the project, Assimakopoulos expressed interest via a company called Truthheim Invest.

The cabinet even signed a Memorandum of Understanding with Truthheim, but the plan was scrapped when it produced outrage in the cultural community, supported by politicians, who argued that the state should complete the new SND complex with its own funds.

The "new" SND project broke ground during Communism but has been dragging on due to lack of interest and funding.

Over the years the state has put Sk3.5 billion (€90 million) into the SND building. Constant delays in construction have required additional funds for the preservation of the site.

With Sk350 million (€9.07 million) in expected revenue from the sale of the two buildings, the state would only have to come up with another Sk550 million (€14.25 million) to complete the project. These funds are expected to come from the sale of plots surrounding the new SND complex. The SND complex is situated close to the Danube River in Bratislava's Old Town, a short walk away from the capital's city centre.

On July 1, the parliament approved Culture Minister's Tóth's plan to sell the buildings as long as the proceeds would be used to help the ministry to complete the new SND building.

"Minister Tóth will do everything to make sure that the deadline for the planned opening of the new theatre - September 2006 - is kept," said the ministry spokesperson.

The SND administration, meanwhile, is preparing for a big move.

"We have to prepare so we can start performing as planned," Izabela Pažítková, an SND spokesperson, told The Slovak Spectator.