IMAGINE sitting in your living room, your toes warm and toasty in your favourite slippers, as you sip coffee and browse the webpage of your preferred online bookshop. Even better, imagine instantly buying the book you are interested in with a click of the mouse, delivery just a day away. Sound good? 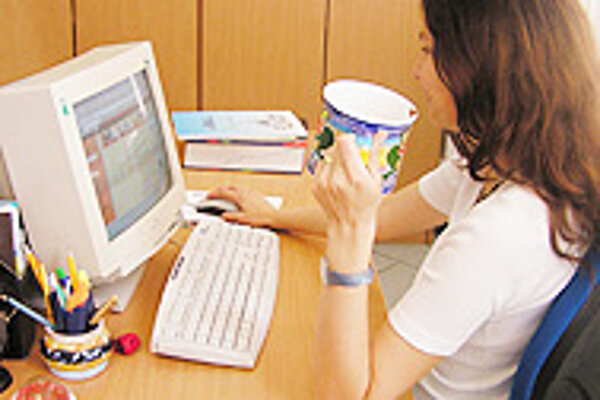 Font size:A-|A+0
IMAGINE sitting in your living room, your toes warm and toasty in your favourite slippers, as you sip coffee and browse the webpage of your preferred online bookshop. Even better, imagine instantly buying the book you are interested in with a click of the mouse, delivery just a day away. Sound good?

Many of us know the cosy feeling of instant gratification as far as Web shopping is concerned. We should count ourselves lucky. Ninety-five percent of Slovaks do not.

Based on a recent survey conducted by GfK Slovakia, only 5 percent of respondents have ever purchased goods via the Internet. Just a fraction of the surveyed population - a mere 3.1 percent - said they shopped online more than once. The statistics are quite different elsewhere.

The British Future Foundation, a consumer market think tank based in the UK, estimates that one in every four British residents shops online, purchasing goods and services over the Internet with a credit or debit card.

In Germany, approximately half the population (46 percent) buy goods and services online. Currently, more than 25 million Germans, aged 14 to 69, use the Internet to shop.

With other Europeans surfing the sales, why aren't Slovaks?

It is a vicious circle, insiders say. Few Slovaks are comfortable shopping online, which is why Slovakia's share of online stores is so meagre. On the other hand, why should Slovaks visit Slovak-based online shops if the variety of products and services is so poor?

Ondrej Macko, editor-in-chief of PC Revue, Slovakia's IT magazine, summarized why he thinks Slovaks are not following in the footsteps of other European Internet buyers.

"Various surveys show various rates of Internet penetration [in Slovakia], but on average it is only 10 to 15 percent. This is very little compared to neighbouring countries. And broadband Internet access costs between Sk500 to Sk1,000 (€13 to €26) per month, which is not affordable for most Slovak families.

"Further, Slovaks do not like paying for goods that are not yet in their hands. Third, Slovak online shops are not offering much. There are very few of them, the most successful being those selling books, CDs and DVDs. But the sale of traditional goods is missing."

Online retailers based in Slovakia have a hard road ahead of them. They must convince 95 percent of Slovaks that ordering and buying over the Internet is a better way to shop.

"We first have to show people that they do not have to be scared of the Internet. Later we can show them that they can order goods online as well as pay for services," Peter Ferianc told The Slovak Spectator. Ferianc is the owner of one of Slovakia's few homegrown online stores, kšeft.sk [www.kseft.sk].

Online retailers, including financial services companies that offer Internet banking, agree that the main obstacle to getting Slovaks to participate in the growing global trend of online shopping is trust. In general, Slovaks do not believe that items they pay for in advance will arrive at a later date by post as promised.

"It's not that people don't trust the payment method itself. It's that they don't believe the goods will arrive after they've paid," said Ferianc.

Slávka Šikurová, marketing manager of Gratex International, which operates RealShop.sk, said that Slovak customers still want to touch the goods before buying. Although customers abroad feel similarly, they usually inspect the goods in brick-and-mortar shops and then buy them at a discount online. Slovak customers generally buy the goods when they are in the traditional shop.

Apart from low Internet penetration, some blame Internet shops themselves for turning customers off.

Ferianc tells of one story that has been circulating for years: a customer orders goods over the Internet and instead of getting what they paid for, they receive a package filled with paper.

"The media is constantly feeding the public with stories saying 'Be careful when you buy something online'," he said.

According to Ferianc, his business attracts new clients almost exclusively through good references.

"It is all about having a good experience," Ferianc said.

Is there a future?

He said the Slovak market resembles the one in the Czech Republic about five years ago, and that the situation [reluctance to buy online] should change soon.

"There is a mistrust among Slovaks against buying online. This is understandable but it is nothing that can't be changed. We also see steps [taken by Slovak society] to encourage Internet penetration and generally increase Internet skills. We believe that buying online has such significant advantages that it is only a matter of time until Slovak customers will get to like it," Kovařík said.