MEETING foreigners in Bratislava over the summer is commonplace. Hearing them speak the local language is more of an experience. But listening to them belt out Slovak ballads is a real smash. 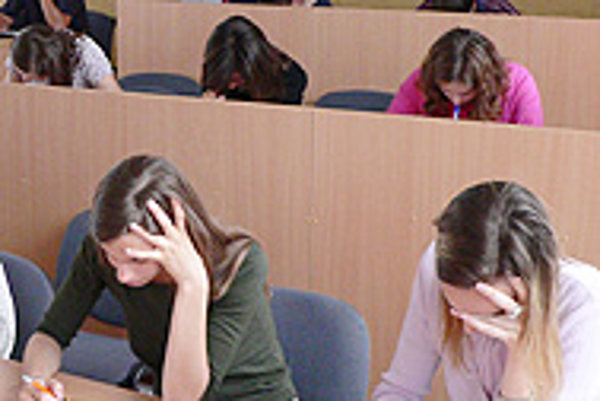 Font size:A-|A+0
MEETING foreigners in Bratislava over the summer is commonplace. Hearing them speak the local language is more of an experience. But listening to them belt out Slovak ballads is a real smash.

The current hit with foreigners at this year's Studia Academica Slovaca, Bratislava's well-known Slovak language summer school, is Fajčenie škodí zdraviu (Smoking damages health) by Vidiek. The medley of accents coming from the students infuses the song with life - and sometimes, in the mouths of the foreigners, new meaning.

"They sing Slovak songs non-stop," says the institute's Eva Vojtechová. "Popular ones as well as traditional ones."

Lyrics help the students remember words and phrases of the new language. When a teacher, speaking Slovak, told a new student that he would manage (zvládne) the 20-day course, he smiled, immediately recognizing the word from the often-broadcast refrain, "pár dní zvládneš" (you can manage a few days), from Pár dní by Desmod and Zuzana Smatanová.

Studia Academica Slovaca is in its 41st year as a part of Bratislava's Comenius University. This year's course, starting August 7, welcomed 182 students from 30 countries - the largest number of participants in the school's history. Most of the students are from Germany, but many came from Asian countries this year, plus a few students from the US. According to Vojtechová, enrolment increases every year.

The students, primarily in their 20s and 30s, enrol for various reasons. Some need Slovak for professional purposes. Some want to understand their Slovak partners. Some, albeit a minority, take it out of pure interest and curiosity in the country, since it can seem relatively exotic from a foreigner's point of view.

"I like the language. It's very difficult but interesting," says Jingwen Ji, known as Janka among friends. As she plays with potatoes on her lunch plate, she remarks: "We never have potatoes as side dish back home."

Janka is one of nine Chinese students at the course, who study the language back home at Beijing Foreign Studies University. She and her friend Tingting Li, aka Lívia, are multilingual. They know they want to travel the world and meet many people, and this course is helping them fulfil that goal.

Christian Irsfeld from Germany says he applied for the Slovak language course to explore Slovakia beyond its stereotypes. A Japanese girl, Kaori Kume, became enamoured with Slovakia on a previous visit to a Slovak friend. This year, she was determined to come back to learn more.

"I knew almost nothing about Slovakia," says Kume, who studies political science in Japan. Kume thinks Slovaks are "very kind" and friendly despite the language barrier. She admits that Slovaks - mainly children - stare at her unfamiliar Asian features when she takes the bus from Bratislava to Trnava to visit her friend. Back home, people are surprised she is studying the language of such a small and unknown country.

One of the four Americans enrolled in the course, actor Jesse Baxter from New York City, was first introduced to the Slovak language in America by a Slovak girl. Baxter visited her in Slovakia over the years, learning a more of the language each time. When the five-year relationship fell apart, he decided not to lose the language.

"Being in the relationship with her was good [PR] for Slovakia," Baxter says laughing.

As an actor, Baxter might find a use for the language one day, but that is not his motive for studying. "I made many friends here and in the Czech Republic, and I want to be able to communicate with them better. I'm very interested in the culture. It became a like a hobby for me, to learn Slovak."

Baxter rarely faces "language barriers" since many Slovaks speak English. But he cannot avoid humorous mishaps. His classmates laughed at him when, one day, he smelled his lunch with a pleasurable expression. "Smrdí dobre," he said. He wanted to say "smells good" (vonia) but instead said "smells bad" (smrdí).

The American finds he runs into more misunderstandings, however, when he uses English. "One day I said something about 'my own eyes' and it was understood as mayonnaise."

Baxter's favourite expression in Slovak is "odkedy-dokedy" (from when to when). He says it reminds him of the popular phrase, "okey-dokey", which, in Midwestern America, means "okay".

And dokedy will the students stay in Slovakia? Until August 27. By the way, it is okey-dokey to visit them at Dúbravka's Inštitút pre Verejnú Správu (Public Administration Institute).