THE COUNTRY lane leading through the tiny village of Beladice near the southern town of Nitra is like Swiss cheese. You must watch carefully where you drive or risk losing your muffler. 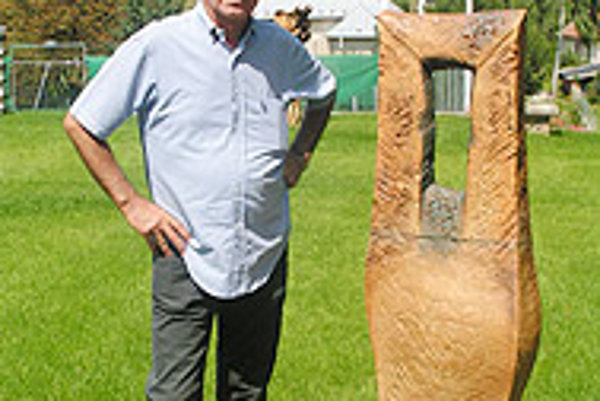 Font size:A-|A+0
THE COUNTRY lane leading through the tiny village of Beladice near the southern town of Nitra is like Swiss cheese. You must watch carefully where you drive or risk losing your muffler. When you lift your eyes at the end of the arduous journey, the Pustý Chotár manor house, a neo-classical building from the 1820s, and the adjacent luxurious Hotel Tartuf come as a complete surprise. The estate has been completely reconstructed, as was the surrounding ample park with robust trees.

Wherever you are at Pustý Chotár (now Park Hotel Tartuf) - walking up the hotel stairs, having a coffee in the manor house or strolling in the park - you realize the place is exceptional for more than its architecture and solitude.

Ceramic artwork is the "genius loci" of Pustý Chotár. Sculptures of various sizes and forms are freely arranged in the park. Ceramic fountains splash with water, birds descend on ceramic feeders and decorative pillars hide outside ventilators. Inside the display is just as ambitious. Ceramic sculpture serves as a coffee table in one room while in another, artworks hang on the walls or sit ceremoniously on shelves of historical furniture.

The ceramics add to the manor house's historical-artistic significance. They also act as mementos of Pustý Chotár's annual ceramic workshop, which draws some of the world's most celebrated ceramists and sculptors.

This summer, the artists have come together for the sixth time, and on August 26, they will present their results.

"I'd like to create a natural gallery of ceramics in the park," says Jozef Vyskoč, executive director of Ekostavby Ltd, which manages the manor house, park and hotel.

Vyskoč got the idea to hold artistic workshops at Pustý Chotár after visiting academic sculptor Ilja Holešovský in 1998, a year before the reconstruction of the manor house. Since the first workshop in 1999, Vyskoč and Holešovský have been the brains and brawn behind the project.

About seven artists participate in the 20-day workshop every year, during which time they create dozens of works, from metre-high sculptures to miniature forms made of clay, fired clay or porcelain. Contrary to Slovakia's other ceramic workshop, which takes place in Lučenec's ceramic factory and specializes in fired clay products, the workshop at Pustý Chotár puts no limits on the artists in terms of theme, style or creative approach.

"I have always been drawn to art," Vyskoč says. "I used to buy ceramic works and hand them out at birthdays. Then I realized that I could bring these works here, return the [manor house] to its original artistic-historical value by creating conditions for artists to come and work. The results of these workshops would then decorate the building's exterior and interior."

The Pustý Chotár manor house was first built in 1820 by the noble family of Jesenský. Later, Baron Henrik Lindelóf reconstructed and enlarged the estate in neo-classical style. Today, it is a tradition for workshop participants to decorate the grounds and interior with their creations.

"The Pustý Chotár manor house with its park is a national cultural monument predestined to serve the arts and offer pleasant relaxation to its visitors," Vyskoč says.

Workshop participants work in fully equipped studios that are flooded with light. They have a wide range of materials to work with and various firing technologies, including electric and gas furnaces. At the manor's first workshop, American sculptor Nick J de Vries and Turkish artist Halil Yoleri introduced the old technique of "raku", which has since attracted other participants.

Sponsored by Park Hotel Tartuf, a grant from Slovakia's Culture Ministry and several other sponsors, the workshop covers all the visitors' expenses, apart from the travel. During the workshop, the artists live in the hotel and have their meals there.

"Vyskoč is spoiling us with the luxury," says Mariette Groeneveld with a smile. Groeneveld, from The Netherlands, is one of this year's seven participants who intends to spread the word of the workshop and Slovakia to friends at home.

"He [Vyskoč] and his family take very special care of us. But it is all done in a way that makes you feel really welcome here. Mr Vyskoč is a very busy man, but always finds time to come and sit with us [the artists] in the evening. It will be very disappointing to be at home again."

Although Vyskoč speaks only Slovak, he manages to communicate with his guest artists through gestures - and with some help from Holešovský, his artistic partner. During the workshop, Vyskoč and Holešovský "live" with the artists, both of them at hand for advice and help.

Groeneveld, the Dutch artist, says the workshop enables her to get away from her routine work at home. She learns of other artists, their countries and works, and these observations help transform her work.

"I am preparing a surprise for the rest of the participants," she whispers. Observing the others at work, she secretly moulds their heads in clay, the objects they are creating coming out the top of their heads. She plans to reveal them to her fellow participants when the workshop comes to a close.

Workshop participants are invited based on suggestions from previous participants and in consultations with experts on the Slovak ceramics scene. Friends meet friends as well as new artists, helping to enrich the exchange of experience. According to Vyskoč, Slovakia's ceramic artists are quite well known from Japan to the US.

Sometimes a talented student appears in the workshop. Although not a part of the workshop, other interested ceramists come to visit the participants and learn of their work. The artists often keep contact after the workshop ends and invite each other to their home studios as well as to other international workshops.

"It's very interesting to meet artists from various countries and see them work in different ways," says Elisabeth le Retif from France, who works on large sculptures of imaginary women and small figurines of groups of people.

To give the artists a break from work, Vyskoč and Holešovský take them on trips in Slovakia. Some of what they experience is poured into their work. Jindra Viková from the Czech Republic, for instance, took inspiration from crosses she saw at a church in Spišská Sobota.

Others take inspiration right from their immediate surroundings. After Holešovský watched eagles being born on the manor's premises, he used the motif in his work. Deer in the manor house's park, on the other hand, aroused the interest of Meri Wells from Wa les.

Thus far, 34 artists from 12 countries have participated in the workshops. Artists have come from the USA to Israel and many places in between. The sixth annual workshop brought its first participants from France, Great Britain, Lithuania, The Netherlands and Argentina.

"What surprises me most is that the artists set immediately to work after they arrive. They work from dawn to dusk, some even at night. It's a real problem to get them to go on trips to see a bit more of Slovakia," Vyskoč says, laughing.

Vyskoč plans to continue sponsoring the workshop in the future. In case of potential overproduction, he will dedicate the ceramic works to interested galleries.

"I do not see a problem finding a room for new artwork," he says, laughing.