A WINDOW on Bratislava's Židovská street, part of the Museum of Jewish Culture, is displaying Jewish antiquities from the Roman times. One of them, an ancient menorah, provides historical evidence that supports the theory that Jews were brought to the Slovak territory some 2,000 years ago as slaves. 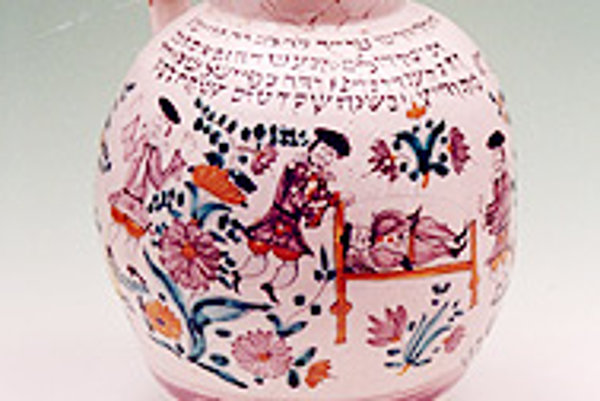 Font size:A-|A+0
A WINDOW on Bratislava's Židovská street, part of the Museum of Jewish Culture, is displaying Jewish antiquities from the Roman times. One of them, an ancient menorah, provides historical evidence that supports the theory that Jews were brought to the Slovak territory some 2,000 years ago as slaves. Historians believe that the Jews settled around the camps of the Roman legions and strategic military defence stations on the Danube line, Limes Romanus.

The artefacts, besides being old, are rare. Some come with stories attached, like the mysterious Senica jars, ceramic vessels created between 1734 and 1776. The story of the jars goes like this: one day, a funeral brotherhood ordered jars from the potters of Senica to commemorate the death of a beloved Jew. They agreed that the inscription would be in Hebrew. Although the Jews prepared the text for the craftsmen, they accidentally changed some of the letters. Experts on Hebrew and Aramaic languages were puzzled by the strange inscriptions on the jars, only to come to the conclusion that the letters were gibberish.

A few items on display do not date back thousands of years, let alone hundreds. These date from the 19th and 20th centuries and represent what the Jews left behind before they were sent to concentration camps during the Holocaust. Items include brass candleholders, parts of dinner sets and various other objects used during Jewish rituals. Paradoxically, it is the relatively modern items, not the antiquities, which are the most valuable.

Their value is tied to the tragic fate of Jews in the 1940s. The otherwise innocuous household items remind viewers of the inexcusable horrors of the Holocaust and its lasting consequences. The history of Slovakia's Jews was lost, stolen or destroyed during the war when Jozef Tiso ruled Slovakia. Tiso ordered that all Slovak Jews be sent to concentration camps. Only a handful of them ever returned. Many, disappointed by Slovakia's treatment and nursing wounds deep in their souls, left their homeland for abroad, emigrating to Palestine (Israel), America and Canada. They left behind the few belongings preserved by generous friends or neighbours.

When the Museum of Jewish Culture opened in 1993, one of the management's goals was to exhibit any and all items that would add to the mosaic of Jewish culture in Slovakia. Candleholders, plates, spoons or spice-boxes represented a life taken away by the Nazis.

At its first exhibit, over 90 items were on loan. Today, only nine are borrowed, the rest is owned by the museum.