PAVOL Rusko is no longer the Economy Minister. President Ivan Gašparovič recalled him from his post on August 24 based on a formal request by Prime Minister Mikuláš Dzurinda. 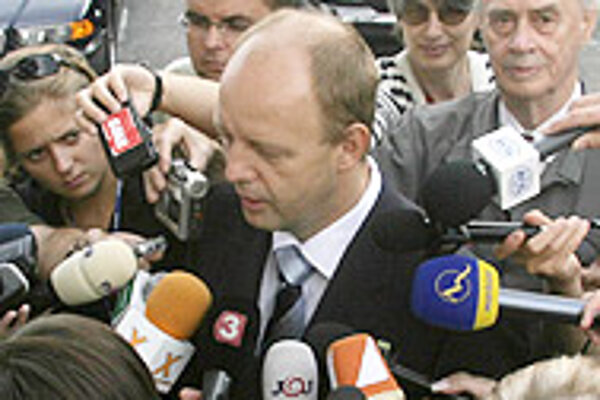 Font size:A-|A+0
PAVOL Rusko is no longer the Economy Minister. President Ivan Gašparovič recalled him from his post on August 24 based on a formal request by Prime Minister Mikuláš Dzurinda.

Rusko, who refused to step down voluntarily, failed to show up at the Presidential Palace to participate in an official transfer of power. He said he was busy travelling to Eastern Slovakia for a meeting with regional party structures.

On behalf of the ruling New Citizen's Alliance (ANO) party, of which he is chairman, Rusko asked Dzurinda to replace two ANO-appointed ministers, Culture Minister František Tóth and Health Minister Rudolf Zajac. A Coalition Agreement, signed by all four ruling parties when entering the cabinet, gives the ANO control over who heads the Economy Ministry, Culture Ministry and Health Ministry.

It is widely believed that the ANO's demand for the ministers' replacement is driven by the fact that both Tóth and Zajac refused to support Rusko, instead telling him to resign from the Economy Ministry voluntarily.

PM Dzurinda has not yet met Rusko's demand to replace the ministers.

The ANO party is now divided between Rusko supporters and those demanding a special party congress to replace Rusko as the ANO's chairman.

Among those calling for a congress are ANO Deputy Chairmen Ľubomír Lintner and Jirko Malchárek. Of the ANO parliamentary caucus, which has 11 MPs, only three support Rusko.

Rusko made it known that if Dzurinda did not replace the ministers, he would consider it a breach of the Coalition Agreement and leave the government for the opposition. The situation now depends on the PM's decision.

Rusko leaves the Economy Ministry after a local Slovak weekly reported that the minister had signed several bills of exchange obligating him financially to a now deceased businessman in the energy sector, Ľubomír Blaško. It later turned out that Rusko signed 11 bills worth Sk104.5 million (€2.7 million). Rusko insists that the whole affair is a "politically motivated campaign" against him [see Rusko Letter on this page].

Because Rusko signed the bills during his term as economy minister and Blaško was active in a sector that Rusko was responsible for, the case raised questions about Rusko's objectivity and transparency as minister.

"He lost the trust of all the ruling partners," the prime minister said at a press conference following a meeting between Rusko and top representatives of the ruling coalition.

Although Rusko has maintained throughout the ordeal that he settled the debts and acted in accordance with the law, he hurt his case by changing his explanation for the bills of exchange.

On August 22, one day before he stood before the coalition board, the ANO's top board met to hear Rusko's explanation of the affair.

Seventeen members of the board expressed their trust in Rusko, insisting that there was no valid reason for the party leader to vacate his post as economy minister.

Against Rusko were ANO board members Malchárek and Lintner as well as Jozef Heriban, an ANO MP, who later announced that he was leaving the ANO party for good.

Culture Minister Tóth and ANO member Ľubomír Roman abstained from voting. Ahead of the meeting Roman told reporters that he thought Rusko "should act like a man", suggesting that he leave the cabinet post.

Many observers, including Lintner for instance, recommended to Rusko that he show principle and step down, just as another ANO member did recently, former Deputy Transport Minister Mikuláš Kačaljak.

The former deputy minister resigned May 1 at his own request after information surfaced linking him to firms owing Sk8 million (€206,185) to social insurer Sociálna poisťovňa.

Rusko, who asked Kačaljak to step down on April 11, said that the ANO wanted to make sure that "not even a shadow of suspicion is shed on the party".

With an unexplained settlement of Sk104.5 , Rusko throws a much bigger "shadow of suspicion" on his ANO party compared to Kačaljak, reasoned Rusko's colleagues.

Before the August 23 coalition board meeting, the ruling Hungarian Coalition Party (SMK) said the coalition board was Rusko's last chance to save himself and explain the bills of exchange.

According to SMK leader Béla Bugár, his party received additional information that Sk1.5 billion (€38.9 million) had been transferred by the Development Agency of Small to Medium-Sized Businesses (NARMSP), which is under the Economy Ministry's jurisdiction, to a private firm in Košice.

According to Bugár, the transaction was opaque and he planned to ask Rusko about it during the coalition board meeting.

Rusko denied that the NARMSP money transfer was non-transparent, saying a proper international tender warranted the transfer and that "everything went outside of the ministry".

"We just signed a memorandum on the further use of these funds with [former EU representative to Slovakia] Eric van der Linden. Have no doubts that he would not sign anything that would be in conflict with the laws," Rusko told reporters as he entered SDKÚ headquarters on August 23, just moments before the coalition board meeting.

PM Dzurinda discovered that NARMSP forwarded the money to Cassovia Bic, a company owned by a single person. It worried Dzurinda that the NARMSP board did not approve the transfer, which is usual if not required in such cases.

"We have indications and fears that [the transfer happened] with only Rusko's awareness," he said.

In the aftermath of the scandal, NARMSP Director Ľubomír Balco was recalled from his post on August 24. Mikloš, as acting Economy Minister, promised to investigate the transfer and ensure that those responsible for any breaches be held legally accountable.