WITH THE IMMINENT removal of Economy Minister Pavol Rusko and signs of his New Citizen's Alliance (ANO) party dividing into camps, questions regarding the future of Mikuláš Dzurinda's government are brought to the foreground. 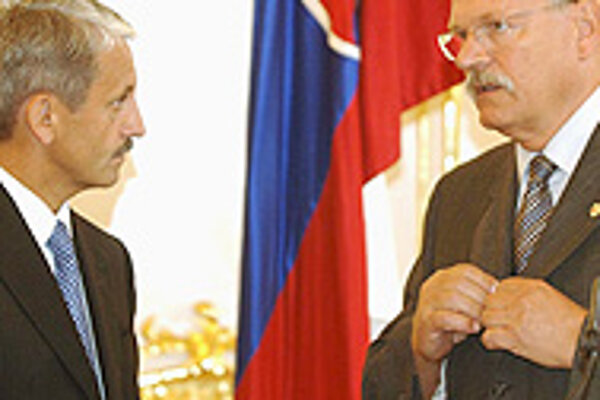 Font size:A-|A+0
WITH THE IMMINENT removal of Economy Minister Pavol Rusko and signs of his New Citizen's Alliance (ANO) party dividing into camps, questions regarding the future of Mikuláš Dzurinda's government are brought to the foreground.

The already minority government, weakened by past departures by members of Dzurinda's Slovak Democratic and Christian Union (SDKÚ) party as well as several ANO MPs, has to prove that it can muster sufficient votes to pass legislation if early elections are to be avoided.

According to Grigorij Mesežnikov, the head of the Institute for Public Affairs, a think tank in Bratislava, the issue of early elections is still a last resort. In general, the ruling parties agree with this.

Zuzana Martináková, the head of the Free Forum (SF), a party largely composed of SDKÚ breakaways, thinks that Dzurinda himself should resign, pointing to the fact that the prime minister has not explained the source of SDKÚ's financing or the takeover of SDKÚ's Sk22 million (€570,000) debt by a private company.

Some politicians are already talking about early elections.

At an August 23 press conference, KSS officials suggested that if one of the ruling parties leaves the coalition, Vladimír Mečiar's Movement for a Democratic Slovakia (HZDS) could take the vacant post.

"Votes in parliament show that HZDS MPs have a slightly different view than the other opposition parties," the KSS chairman, Jozef Ševc, said sardonically.

In a telephone interview with The Slovak Spectator, the HZDS deputy chairman, Milan Urbáni, said that the HZDS would "react when and if such offers appear" and under what conditions.

Urbáni refused to speculate on such a situation and said that the HZDS would not give any statements on the subject.

According to his HZDS colleague, Deputy Chairman Viliam Veteška, early elections could take place in June of 2006.

The regular election term ends in autumn of next year. Should politicians agree that early elections are necessary, a two-thirds majority of MPs - 90 out of the 150 legislators - would have to support a constitutional law shortening the current cabinet term.

Analysts agree, however, that the cabinet would most likely continue through the regular election term. Early elections are seen as a "marginal possibility", said Mesežnikov.

"Although it remains open as to how some ANO politicians will support the cabinet, whether as part of the ANO or under a different party, the future of this cabinet remains positive. The will [of ANO] to remain in the coalition was shown clearly," he said.

Political analyst Ľuboš Kubín of the Slovak Academy of Sciences agreed with Mesežnikov.

"Ahead of the Rusko affair, early elections were very unlikely. But even under the current circumstances early elections would only serve two parliamentary parties: Smer and the KSS. All other parties would prefer to last out the election term," he told The Slovak Spectator August 24.

Inside ANO, several party members who thought Rusko should resign as Economy Minister requested that they reserve the right to decide Rusko's successor. ANO Deputy Chairman Ľubomír Lintner and Health Minister Rudolf Zajac, an ANO appointee, were among those who demanded such rights.

Rusko could potentially face competition for the top party post if special party elections are held.

ANO's František Tóth, who is also the cabinet's Culture Minister, told the press that he would support Lintner in a possible bid as ANO party chairman.

Rusko and his supporters made it clear how they feel about the deputy chairmen and the minister's position.

After an ANO board meeting on August 23, Rusko announced that the ANO voted to remove Tóth and Zajac from their cabinet positions and replace them with other ANO candidates.

The ANO board also gave Lintner, Tóth, and Jirko Malchárek, another ANO deputy chairman against Rusko, votes of no-confidence. Prior to a coalition board meeting, Malchárek said that Rusko should resign. He also stressed that he hoped that ANO would remain a ruling coalition party.

Pavol Rusko: I have nothing to hide

PAVOL Rusko published an official letter to Slovak citizens through several local news agencies shortly after an August 23 coalition board meeting in which top politicians requested he explain his recent role in a suspicious financial transaction.

In the letter, the economy minister said that people have witnessed an "intense, politically motivated, two-week campaign against me".

Rusko said that contrary to media reports, he has been able to explain why he signed bills of exchange worth more than Sk100 million, but that "several media outlets with the assistance of some politicians have deliberately distorted my explanation".

According to Rusko, not even his partners at the coalition board meeting were interested in hearing his side of the story.

Rusko explained in the letter that as a minister, the law still allows him to be a shareholder in a company and an owner of a private firm, and that he can legally invest money as he sees fit.

He said that in 2000 he gained Sk100 million from the sale of a stake in TV Markíza, which he founded in mid-1990s. He has also had other income since then as a shareholder in various other companies.

"In September 2003 I signed bills of exchange worth Sk104 million. With some of them I guaranteed for past debts, some covered investments in future projects," Rusko said in the letter.

He listed the calendar of when and to whom he paid back the amount indicated in the bills of exchange, and said that all the data is backed by contracts and specific documents.

Rusko planned to establish a new publishing company with Sk40 million. The project never took place, however, and so he returned the money.