AFTER the recent summit negotiations in Bratislava between the US and Russian heads of state, the visiting presidents left Slovakia's capital a little bit heavier. In their suitcases were replicas of one of the most valuable swords ever made in ancient Europe: the Blatnica sword. 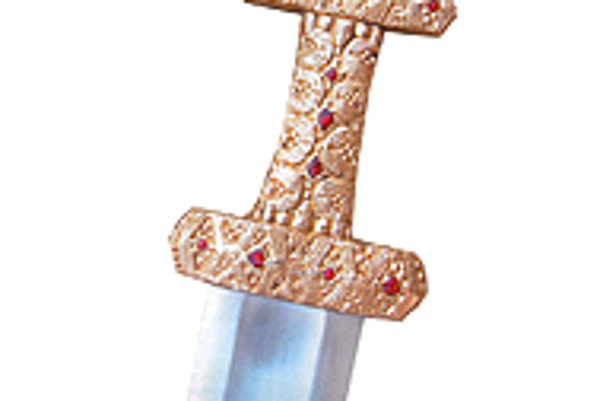 AFTER the recent summit negotiations in Bratislava between the US and Russian heads of state, the visiting presidents left Slovakia's capital a little bit heavier. In their suitcases were replicas of one of the most valuable swords ever made in ancient Europe: the Blatnica sword.

Rather than used in battles, the ostentatious sword probably served as a symbol of power. Franconian king Karol Veľký, who overthrew the Avars, a neighbouring tribe in what is now Slovakia, used two swords: one for battles and one, like the Blatnica sword, he wore with his crown.

The sword, found in Blatnica near Turčianske Teplice, was produced in one of the top Western European arms-producing workshops in the 8th century, just when the Slavic elite was coming into power. All the archaeological finds of this period point to a connection between the Slavs and

Franconians, including the Blatnica sword, which employs techniques common to both tribes.

Through October 31, the Blatnica sword is on display at the Kamperová kúria, a 16th century Renaissance mansion housing Bratislava's Archaeological Museum. The sword has been reconstructed to its original shape, based upon careful analysis of materials and techniques used during the time. The exhibition, called Sword - Origins of the Swords in Slovakia, maps sword development as a weapon of privileged societies. Find the Kamperová kúria located on Žižkova 12.