Medieval past is Bratislava's crowning glory

PRAGUE prides itself on its 100-tower architecture. Budapest is proud to be an imperial city. Slovakia's dignity comes from its medieval past, and this summer, like the last, Bratislava is determined to be remembered as the most important coronation city during the Austro-Hungarian Empire. 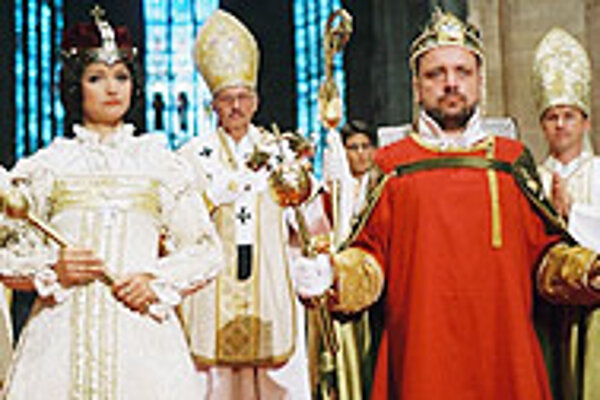 Font size:A-|A+0
PRAGUE prides itself on its 100-tower architecture. Budapest is proud to be an imperial city. Slovakia's dignity comes from its medieval past, and this summer, like the last, Bratislava is determined to be remembered as the most important coronation city during the Austro-Hungarian Empire.

At the moment, the budding capital is in full preparation mode for the third annual Coronation Ceremonies, in which Bratislava will ceremoniously re-enact the coronation of Rudolf II. The royal family, played by renowned Slovak actors, and guests are getting ready for the occassion and tourists are taking notice.

"Look at the costume that guy is carrying!" an American visitor, commenting on the attire in the arms of a knight performer, interrupts as a tour guide gives a lecture on the Pálffy Palace, which houses the Austrian embassy.

"I bet they're planning something really historical," he muses.

According to Miroslav Vetrík from Korunovačná Bratislava, the civic organization that coordinates the ceremonies, none of the former main cities of the Austro-Hungarian Empire can compete with Bratislava's coronation history. Bratislava held 19 coronations between 1563 and 1835.

"There was no coronation tradition in Vienna. Budapest crowned only three heads and the coronation cathedral in Hungary's original coronation city, Székesfehérvár [Stoličný Belehrad], is in ruins," he explained. Bratislava's coronation venue, St Martin's Cathedral, is in fine condition.

When the idea for a summer coronation ceremony was born three years ago to commemorate the 440th anniversary of the first coronation ceremony, there was nothing to stop Bratislava officials from establishing a new tradition in the shadow of the old.

In 2003, Bratislava's Coronation Ceremonies re-enacted the crowning of Maximilian II, an event that drew 30,000 people. In 2004 the city performed the coronation of his wife, Queen Mária. This year the couple's son dons the crown.

The royal family will arrive in Bratislava on Friday, September 2. After walking through the city's centre and attending a play at the Slovak Philharmonic, they will saunter over to Bratislava Castle.

On Saturday, September 3, the royal procession will descend from the castle hill at 10:00 to attend the coronation in St Martin's Cathedral at 11:00. Throughout the day, visitors will be entertained by knights' accolades, the coronation's oath and a royal feast on Hviezdoslavovo Square, as well as various craftsmen and performers along the Old Town's streets.

The next day, on Sunday, newly crowned King Rudolf II will leave Bratislava for Trenčín, where the ceremony festivities will continue. The festival in Trenčín marks the first time that the Bratislava event has moved beyond its Old Town.

"Bratislava is the gate to Slovakia," says Peter Čiernik, mayor of Bratislava's Old Town. "With Trenčín, the Coronation Ceremonies break regional barriers. We welcome contacts with other towns."

By inviting other towns to participate in the Coronation Ceremonies, the organizers hope to underscore that Slovak history did not develop within the confines of the capital.

In Bratislava, they envision establishing a museum to house the replicas of the historical costumes worn by the actors, the coronation crown and sword, and sculptures of all the crowned kings and queens that are now exhibited in the Franciscan Church.

The goal is for Bratislava to share its crowning glory with visitors all year round.

What: Coronation Ceremonies (Part III) - the crowning of King Rudolf II.
When:September 2 to 4.
Where:Streets of Bratislava's Old Town and Trenčín.
For more information and to purchase tickets (Sk1,500) for the coronation at St Martin's Cathedral, visit the Bratislava Tourist Service at Zichy Palace on Ventúrska 9.
Tel: 02/5464-1794
or 02/5464-1795.