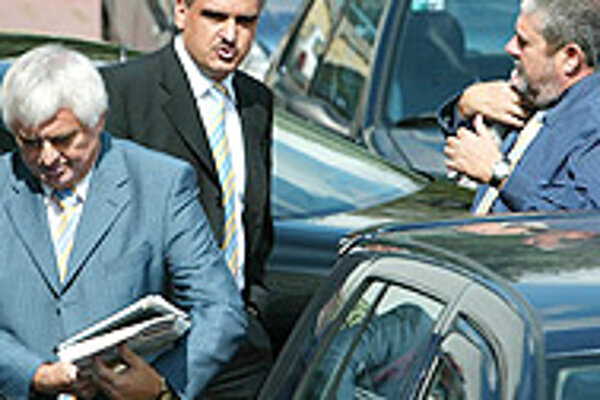 The SDKÚ, SMK and KDH agreed to reject Rusko's demand on behalf of the ANO to replace the culture and health ministers, František Tóth and Rudolf Zajac, respectively, from their posts.

Rusko demanded their replacement after the ministers teamed against him with several ANO deputy chairmen, including Ľubomír Lintner.

The ruling parties informed the ANO as well as President Ivan Gašparovič of their decision.

Analysts expect the ANO to join the opposition. According to ANO spokesperson Magda Krasulová, the recent development is the result of the ANO's deputy chairmen pursuing personal, rather than party, interests.

However, the ruling coalition must wait for the next parliamentary session to begin to find out how many members of parliament will support the government following a major split inside the ANO.

Although it remains a single political entity, the ANO has nevertheless broken into two camps: those who back party leader Rusko and those who oppose him. Rusko's opponents recommended that he voluntarily resign as economy minister over conflicts of interest.

Rusko signed over Sk104.5 million (€2.7 million) in promissory notes to Ľubomír Blaško, a businessman active in the energy sector, while Rusko was economy minister. Among other areas, the Economy Ministry oversees the energy sector. In August, when a local paper revealed that Rusko had borrowed large sums of money from Blaško, it threw the minister's past actions and decisions into question.

The ANO national council met on August 27 in Banská Bystrica to address the serious rift inside the party.

While the ANO's parliamentary caucus consists primarily of Rusko's opponents, the leader maintains support within the ANO party structures.

Ahead of the national council meeting, seven out of eight ANO regional branches expressed their support for Rusko.

On the other hand, Rusko's opponents comprise most of the ANO's MPs.

The deputy chairmen have formed an opinion platform saying their goal is to defend the ANO's core principles.

"Our goal is to go back to the principles that we promoted before the [2002] elections, including the parts relating to politicians. There cannot be different rules for party chairmen and for regular party members," said Lintner.

On August 26, the rebel MPs pledged to support the ruling coalition in parliament.

"I see no reason why the bills of exchange affair of Pavol Rusko should destabilize the whole cabinet. With [this declaration of support to Prime Minister Mikuláš Dzurinda], we confirm that we support the government in its current form," said Lintner.

However, the part of the ANO that stands behind party leader Rusko considers the declaration to be a personal initiative that does not represent the will of the party.

ANO spokesperson Magda Krasulová told The Slovak Spectator that the ANO's top and regional structures considered the chairmen's opinion platform as well as the declaration of support to be an "individual activity of the given people who are pursuing their personal interests".

"They do not have the support of the ANO's regional structures nor the membership base," Krasulová said.

She also said that she wondered "how the given politicians want to defend the interests of the ANO when the ANO's top structures expressed non-confidence in them".

At a meeting of the ANO's national council, delegates supported Rusko and recommended that ANO Deputy Chairmen Lintner, Tóth and Malchárek step down.

Lintner said that he considered it possible that the ANO structures would "try to find ways to expel us from the ANO" but neither he nor the other rebel ANO members were planning to leave by themselves.

Rusko is demanding that PM Mikuláš Dzurinda replace Culture Minister Tóth and Health Minister Rudolf Zajac, who is not an ANO member but was nominated to the post by the ANO.

According to a Coalition Agreement signed by all ruling parties after the 2002 national elections, the ANO has a right to nominate its members to the culture, health and economy ministerial seats.

The ANO is demanding that the PM appoint Vladimír Menich as the new economy minister. Currently Menich works as the country's deputy transport minister.

The ANO also wants Dzurinda to appoint Marian Biĺo as the new health minister and Milan Kepeňa as the new Culture Minister. Biĺo is the current head of the regional office of health insurer Všeobecná zdravotná poisťovňa in Michalovce, while Kepeňa is the head of the Banská Bystrica District Office.

Dzurinda made it clear he was not planning to meet Rusko's demands.

"I do not wish that one or the other minister leave. I do not see any reason for it," Dzurinda told the SME daily.

If Dzurinda recalls Tóth and Zajac from their ministerial positions, he risks losing the support of the seven ANO MPs led by Lintner.

These MPs insisted that their declaration of support is only to "the government in its current form including the two ministers in question".

The next parliamentary session starts September 12.

"The parliamentary session will show whether the government has enough support," said Finance Minister Ivan Mikloš.