A RECENT coalition crisis surrounding the removal of Pavol Rusko as economy minister has weakened the minority government. Meanwhile the opposition has declared it is ready to support the idea of early elections. Nevertheless, no such scenario is expected anytime soon. 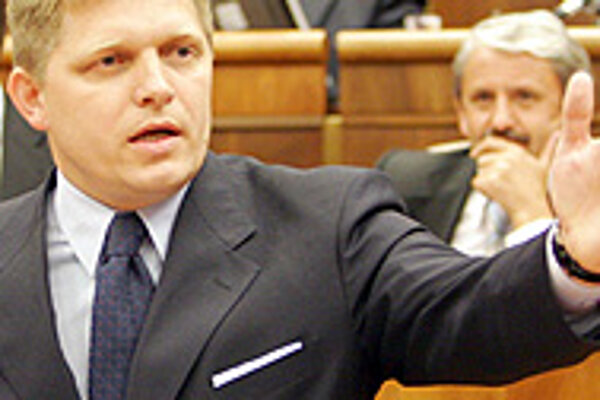 Font size:A-|A+0
A RECENT coalition crisis surrounding the removal of Pavol Rusko as economy minister has weakened the minority government. Meanwhile the opposition has declared it is ready to support the idea of early elections. Nevertheless, no such scenario is expected anytime soon.

Parliamentary mathematics shows that little will change in the balance of power in parliament between the opposition and coalition parties despite the rift in the ruling New Citizen's Alliance (ANO) party. The result is a minority goverment, whether Pavol Rusko and three of his loyal MPs left for the opposition or eight of Rusko's ANO opponents, led by ANO Deputy Chairman Ľubomír Lintner, departed instead.

If Rusko's faction leaves, the ruling coalition would have 66 seats. If Lintner and company leave, it would be left with 62. The coalition government has been operating with 69 seats; 76 are needed to make a majority.

Independents will continue to play a crucial role if the government hopes to pass legislation in parliament, analysts agreed.

"The government has relied on independent MPs in the past and will continue to rely on them in the future as well," said Ľuboš Kubín, a political analyst with the Slovak Academy of Sciences.

Fico said on August 29 that Smer would not rush to initiate early elections because doing so would be "unrealistic".

The opposition party Movement for a Democratic Slovakia (HZDS) agrees that the soonest an early election could arrive is in June of 2006. During a visit to the Košice region on August 26, Tibor Cabaj, the head of the HZDS parliamentary caucus, said that his party would propose shortening the current cabinet term. In order to shorten the election term, however, 90 of Slovakia's 150 MPs would have to back the proposal.

Gyula Bárdos, the head of the Hungarian Coalition Party (SMK) caucus, says the opposition is not sure whether a possible motion for early elections would pass in parliament, which is why they are not eager to initiate it quickly.

Bárdos insists that his party's priority is to complete the regular election term.

"There is still a chance to complete the regular term. But whether this becomes a reality will be clear at the upcoming parliamentary session," Bárdos told The Slovak Spectator.

He thinks the split in the ANO makes the cabinet's position "more complicated". "The numbers [in parliament] have changed," he said.

Whether Rusko or his opponents leave for the opposition, the government would have to negotiate support with them. At this point, it may be difficult for the coalition to count on Rusko.

According to a poll carried out by the MVK agency between August 17 and 24 on 1,085 respondents, the ANO suffered an almost 3 percent decrease in voter support compared to the previous month.

While in July the party gained 7.9 percent support, one month later it was just 5 percent, which is on the very threshold of support required for seats in parliament.

As of August 31, no other polls were available to confirm or deny that the Rusko affair has hurt the ANO's popularity.

According to MVK sociologist Pavel Haulík, however, the ANO's drop in support is "undoubtedly related" to the former economy minister's handling of his financial affairs.

The poll also shows that the whole coalition, not just the ANO, lost voter support.

Surprisingly, the non-parliamentary nationalist Slovak National Party climbed to 10.4 percent, in third place behind Smer with 32.9 percent. The HZDS follows with 11.4 percent.

Parliamentary caucuses
and the number of MPs