Waste the waste ... or recycle it!

TWO neighbours in a small village near the Hungarian border are bickering over their garbage.
"No, I can't share my bin bags [for plastic waste] with you," says one. 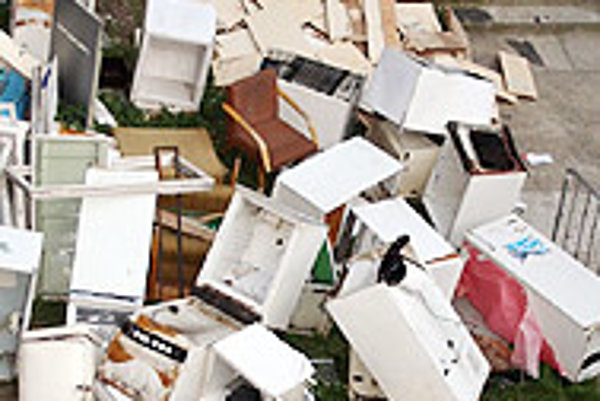 Font size:A-|A+0
TWO neighbours in a small village near the Hungarian border are bickering over their garbage.

"No, I can't share my bin bags [for plastic waste] with you," says one.

"But you're not recycling!" the other accuses.

Environment Minister László Miklós has taken on the issue of waste management in Slovakia by introducing tougher, more environmentally friendly laws. However, to win the recycling war, he will have to capture the hearts and minds of the average Slovak.

Every EU member state seems to take a unique approach to waste management. Recycling programmes differ not only from country to country but also from county to county. Several boroughs in London, for example, ensure that its residents properly separate their waste by employing waste police. These inspectors check people's rubbish for glass, plastic and paper. "Irresponsible" residents failing to meet separation requirements face up to GBP 1,000 (€1,460) in fines.

Slovaks can be encouraged to recycle "by educating people and explaining the ecological advantages" says Oľga Gáfriková from the Slovak Association of Towns and Villages (ZMOS). She told The Slovak Spectator that punitive measures alone would not do the trick.

According to Gáfriková, individual municipalities implement local waste separation policies. "Slovak law does not make [recycling] mandatory" unless the local authority does.

This will change, however. All Slovak villages and towns will be obliged by law to implement and enforce local waste separation by 2010.

The Environment Ministry's goal is to adopt all European Union legislation in regards to waste management. Consequently, the ministry introduced - and passed - several new amendments to waste management laws, reminding the public that it is time to take trash seriously.

Starting August 13, the new law obliges producers of electric goods to recycle. Producers like Sony can collect the goods themselves or contract retailers to do it for them. In other words, a customer who buys a new television can discard their old one at the shop.

According to a preliminary survey conducted by the Electric Goods Producers' Association, most retailers of electric goods will offer recycling and collection services by the end of the year.

It also means that customers will absorb the cost in the form of higher retail prices. Each item will increase by a proportional recycling service fee. This money will help finance the collection and disposal of old electronic goods.

The fees are expected to push prices up an additional Sk500 (€12.90) for large goods such as refrigerators and air-conditioning. Medium-sized goods should increase between Sk150 (€3.90) for dishwashers and washing machines to Sk40 (€1.03) for vacuum cleaners. Small goods such as hair dryers will add about Sk10 (€0.25) to the purchase price.

The waste management law does not require retailers to disclose how much recycling fees contribute to the overall purchase price. Consequently, pricing strategies are not likely to become more transparent.

Under certain conditions, recycling fees will be transferred into a Recycling Fund, among others, designed to help villages meet the new electronics recycling rules. The goal is discourage villagers from disposing of unwanted electronics in nearby woods or fields, said Oľga Gáfriková.

Current waste management law does more than reinforce the recycling of electronics. It also targets car producers and importers by levying a fine on cardboard and plastic packaging. These recycling fees will be transferred to the aforementioned Recycling Fund.

The Recycling Fund was established in 2001. Its purpose is to redistribute money collected from recycling fees to local authorities and organizations in order to support recycling and waste management projects.

The ministry's most recent waste management amendment poses a hidden threat to the Recycling Fund, Ivan Zuzula, the director of the Recycling Fund, told the Hospodárske noviny daily. The amendment not only reduces import recycling fees from Sk3,000 to Sk2,000 (€77.30 to €51.50), it also allows producers and importers of goods packaged in PVC, metal, paper, cardboard and glass to avoid paying the fees entirely if they organize their own means of recycling or hire a subcontractor to do it. At the end of the day, Zuzula warns, this could bankrupt the Recycling Fund.

The Recycling Fund has no authority to check whether producers and importers comply with the recycling laws. "We can only check waste management projects that we directly finance," Magdaléna Sedláčková, spokesperson for the Recyling Fund, told The Slovak Spectator. Without a watchdog, the companies could cut corners.

The Environment Ministry's waste management department is not so pessimistic about the Recycling Fund's future prospects.

"Speaking about threats to the Recycling Fund is not founded. The fund has 11 different recycling sections and only one is directly influenced by the latest amendment," the department informed The Slovak Spectator.

* receives 12% from other eleven sectors to finance waste recycling promotions,
support of waste separation, IT systems, research into new technologies of waste recycling