World music with a Jewish slant

THE PREßBURGER Klezmer Band has been on the music scene for 10 years. But the Bratislava band's current sound gelled about two years ago when a few members went to klezmer school abroad. 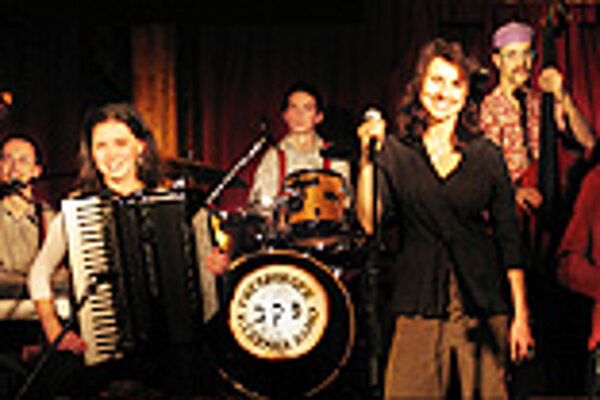 Font size:A-|A+0
THE PREßBURGER Klezmer Band has been on the music scene for 10 years. But the Bratislava band's current sound gelled about two years ago when a few members went to klezmer school abroad.

"A few of us attended renowned klezmer courses in the US and Great Britain, and we began to focus more on the source and theory of klezmer. We started intensively studying the original recordings," explains Andrej Werner, the band's violinist.

This month, Slovakia's top klezmer band tours Slovakia, introducing its freshest sounds yet as part of its Ot Azoy! Tour 2005. (Ot azoy or "That's the way" in Yiddish, is the name of the band's latest album.)

The Preßburger Klezmer Band will play in Slovakia between September 4 and 10, making seven stops total. A few of the concerts land on special occasion days.

The Bratislava show, coming to town September 4, falls on the European Day of Jewish Culture. The concert in Trenčín on September 9 commemorates the Day of the Victims of the Holocaust and Racial Violence. The band's other four concerts - in Prešov, Banská Bystrica, Žilina and Nitra - are organized in cooperation with the Central Union of Jewish Religious Municipalities in Slovakia.

"The aim [of the concerts] is to bring Jewish music to those places where Jewish culture was once thriving and rich. Sadly, Slovakia's Jewish communities are so small now," says band member Samo Alexander, a double-bass player and singer.

He says the band hopes that people who hear them understand that there is more to Slovak culture than what the media shows them "and that it's right here, in Slovakia".

Alexander is looking forward to the band's final concert in the small town of Veľký Krtíš. "We haven't played in that region for ages, so we are curious how it'll turn out," he says, adding that people in small towns "are often kind and spontaneous".

The seven-member band, featuring accordion player and singer Snežana Jović from Serbia and Montenegro, is a frequent guest at European music festivals.

Over the summer it accompanied The Klezmatics when the US band played Bratislava, and participated at KlezFest in London. It has worked with Polish musicians André Ochodlo and Adam Zuchowski and toured France, Spain, Germany and Slovenia.

The Preßburger Klezmer Band will perform its "best of", original compositions and new songs from an upcoming album that reaches towards Balkan motifs. The plan, says the band, is to unleash the newer, more joyous songs at Bratislava's open-air stage and reserve the melancholic atmosphere for the synagogue shows.