SLOVAKIA is known more for its juniper berry spirit, borovička, than for its wine. But when it comes to celebration and ritual, Slovaks favour Bacchus' brew. 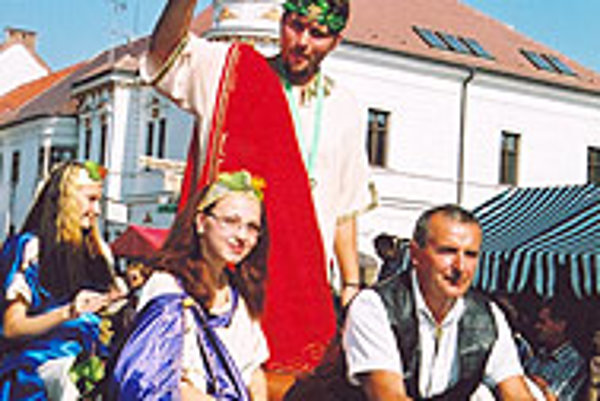 Font size:A-|A+0
SLOVAKIA is known more for its juniper berry spirit, borovička, than for its wine. But when it comes to celebration and ritual, Slovaks favour Bacchus' brew.

Every year at this time, Slovak vintners prepare for vinobranie. From the Small Carpathians in the west to the Tokaj region in the east, locals start preparing for autumn wine festivals. Music, traditional food and, of course, drinking, is the culmination of a year's worth of work in the vineyards; the grapes now pressed into barrels and yielding their first tastes.

"Wine is not a typical Slovak drink, and I don't know what it means to most Slovaks," says Daniel Balko from Nitra, who oversees the area's cultural activities.

"But we can definitely ponder the importance it has for those who live on lands where grapes grow."

The highlight of vinobranie is burčiak, a thick, sweet, half-fermented grape cider. Burčiak is consumed seven days after fermentation starts. It is good for only two or three days, and then the sweetness gives way to a vinegar taste as further fermentation transforms it into wine.

Stories and legends tell of burčiak's healing powers. One from Tokaj says burčiak cures tumours. Another from

Pezinok says drinking as much burčiak as the amount of blood in your veins makes you a new person; it literally "changes your blood". Newcomers to burčiak be forewarned: Although it tastes mild, nothing more than a child's drink, a pint is enough to dizzy your head. Copious amounts will set you reeling.

Vinobranie celebrations traditionally open with accolades. Regional vintners or town mayors are adorned with grape wreaths. In the Bratislava suburb of Rača and Pezinok, it is Bacchus himself, the god of wine, who decorates the mayor with a special wreath. Immediately afterward, a musical parade tramps through the streets, inviting everyone to sing, eat, dance and drink until the next morning. Some cellars throw open their doors to all visitors for what is known as The Days of Open Cellars.

Rača kicks off vinobranie with its well-established Oberačkové slávnosti, a three-day wine festival held between September 9 and 11. It also provides its own form of "burčiak training".

Nearby Pezinok starts its annual Vinobranie the following week.

"Wine is a tradition that Pezinok citizens are rightly proud of," says Eva Lupová, speaking from Pezinok's Town Office. "They recognize the work involved. Growing good vines and making quality wine from the grapes is a hard sweat all year long."

The townsfolk of Čerhov, a small municipality in Tokaj, praise wine as water, an essential ingredient to sustain life. "Wine making is our livelihood. We follow the tradition of our ancestors, who produced wine in this region since they first settled. And we keep the custom of celebrating it," explains Pavol Balog, the village's mayor.

For more information on Vinobranie events, at least in the Small Carpathians, please visit the calendar at www.mvc.sk.