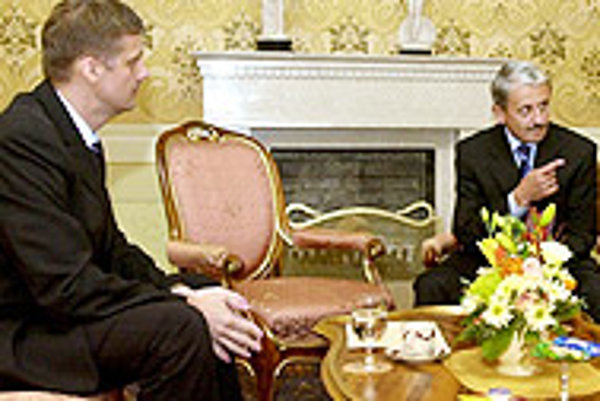 Shortly after the rebel ANO platform pledged its support to the current cabinet, the ruling Slovak Democratic and Christian Union (SDKÚ), the Christian Democratic Movement (KDH) and the Hungarian Coalition Party (SMK) terminated their cooperation with Rusko's ANO.

The SDKÚ, the SMK and the KDH agreed to allow Lintner's group to nominate Rusko's replacement. Rusko and his loyal ANO members will likely leave the coalition for the opposition.

The ruling coalition parties said they would try to complete the election term with Lintner's splinter group, which contains eight ANO MPs. While Rusko enjoys widespread ANO party support, his faction only has three MPs.

The president's decision to cancel the meeting with Dzurinda generated speculation that Gašparovič does not think Malchárek is an appropriate candidate for the job. The president must approve all nominated ministers before they can accept the post.

Presidential spokesperson Marek Trubač told the press that Gašparovič cancelled the meeting because of a busy schedule.

"The president has other important duties connected with the visit of Grand Duke Henri of Luxembourg," said Trubač.

The spokesperson could not say if the president would have time to meet with the PM before his scheduled work trip to the US next week. According to Grigorij Mesežnikov, the head of the Institute for Public Affairs, the cancelled meeting signals that the president is not convinced about Malchárek's qualifications.

"It seems that at the back of the president's mind there are reasons for mulling over the nomination. His decision to cancel the meeting came shortly after the HZD [the party that Gašparovič founded before becoming Slovak president] expressed doubts about Malchárek's capabilities," said Mesežnikov.

The analyst thinks that the president will eventually approve Malchárek's nomination, however. Refusing his approval would unnecessarily "complicate the situation for the PM and the cabinet", he said. Mesežnikov admitted that the nomination was a political move, rather than a decision based on Malchárek's expertise.

"In the current political situation, Malchárek simply represents a group of MPs that can lend stability to the government. The question of [Malchárek's] expertise in the given field is probably secondary, even to the coalition partners," he said.

ANO spokesperson Magda Krasulová, a Rusko loyalist, said that Dzurinda's acceptance of Malchárek's nomination "is just a continuation" of the government's war against Rusko.

"It confirms that the MPs surrounding Lintner are only interested in personal gain, power and influence," Krasulová told The Slovak Spectator on September 7.

The ANO has called a special party congress for September 10. Lintner's splinter group is getting ready to attend the meeting as well.

Krasulová would not comment on Lintner's alleged plan to challenge Rusko as ANO party chairman during the congress meeting, although she did say that Lintner and his peers "have no real support inside the ANO". Lintner was not available for comment.

Analyst Mesežnikov does not expect Lintner's faction to come out on top after the party's congress.

"I expect Lintner and his group will leave the party. Most of the ANO delegates will not join them, since Lintner's group's future is unsure and their positions weak. Rusko on the other hand still maintains a strong position within the party," he said.

ANO MPs will have to nominate a new deputy transport minister as well.

Vladimír Menich, a Rusko supporter, stepped down as deputy transport minister on September 5 to protest the ruling coalition's refusal to work with Rusko's ANO.

"The group of MPs surrounding Ľubomír Lintner, with whom the ruling coalition has chosen to cooperate, does not represent the ANO party members or the political leadership of the ANO. My departure is therefore a logical outcome of this situation," Menich said at his resignation.

Mesežnikov is pretty sure that the coalition will survive until the end of the current election term - autumn 2006.

"Most of the difficult reforms have already been passed. Provided the government does not try to push controversial laws, the ruling coalition should be able to complete the term as planned," he said.