SIX Slovak ministries will tighten their belts thanks to private audits of the ministries of labour, transportation, defence, interior, regional development and economy. 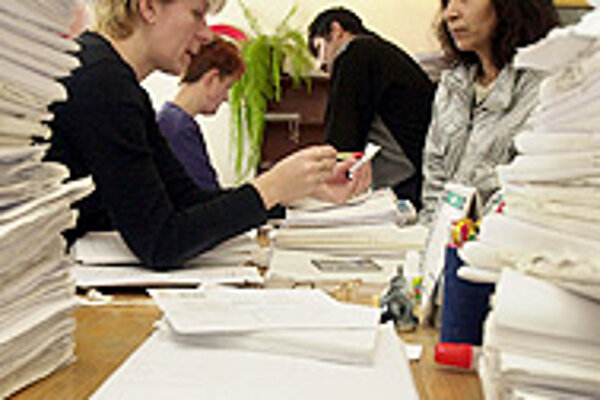 Font size:A-|A+0
SIX Slovak ministries will tighten their belts thanks to private audits of the ministries of labour, transportation, defence, interior, regional development and economy.

The audits, designed to measure the effectiveness of state employees and reduce bureaucratic redundancies, cost the ministries a total of Sk70 million (€1.8 million).

The State Service Office, a government body that conducts audits of state agencies, says the private audits do not paint a complete picture of the ministries' effectiveness.

Results from the private audits show that the six ministries can effectively operate with 500 fewer employees and thus save taxpayers at least Sk250 million (€6.4 million) annually.

While most ministries will make the recommended staff reductions, some will use their savings to better compensate existing employees.

The private audit at the Interior Ministry, conducted by Arthur D. Little in February 2005, was the most expensive one, costing taxpayers Sk31.4 million (€816,000).

The Interior Ministry's spokesperson, Boris Ažaltovič, told The Slovak Spectator: "The goal [of the private audit] was to increase the effectiveness of our economic management and increase transparency. We want to erase redundant activities. As a result, the ministry's economic departments, the Civil Protection Office and the public administration departments were merged into one division. We are simplifying our management."

The interior department cut 92 jobs shortly after the audit. Further layoffs will be made throughout the year. The ministry expects the audit to save Sk31 million (€805,000) annually on wages and payroll taxes. Total savings on employment expenses could reach Sk43 million (€1.1 million). According to Ažaltovič, the ministry will reinvest its savings into the IT department.

The Construction and Regional Development Ministry paid just Sk3.3 million (€86,000) for its private audit "focused on identifying the shortcomings and creating a more effective structure for the organization", said ministry spokesperson Ján Pálffy.

The ministry will reduce its employees from 350 to 290 by reducing its staff or closing various departments and sections. For starters, it trimmed its number of directors from 26 to 19.

Pálffy said that the consequent savings would be used to attract high-quality labour and increase existing employees' salaries.

The Defence Ministry paid Sk9.5 million for its private audit, which was conducted by S&K Management Systems. It expects to save Sk90 million (€2.3 million) annually.

"The goal of the audit was to shape an effective and transparently functioning ministry and to set clear rules. The main principle is to motivate our employees to perform the best possible work," Defence Ministry spokesperson Zenon Mikle told The Slovak Spectator.

According to Mikle, the audit reduced redundancies between the ministry and the General Staff of the Slovak Army.

"The new organizational structure clearly defines the powers of particular offices, sections and departments," said Zenon, adding that the number of sections was cut from six to four.

The ministry will also reduce the number of its employees and expects to lay off 210 people. Changes will be made to 500 positions. The same firm, S&K Management Systems, conducted the audit for the Transportation Ministry, which was selected in a public tender.

The audit recommended that the ministry reduce the number of directly managed departments and unify certain structures in the transportation and infrastructure spheres.

Tatiana Kelcová from the ministry's press department told The Slovak Spectator that the ministry now has an official directly responsible for the flow of EU funding.

While the Transportation Ministry has cut 47 positions, they have only fired 18 employees. [The remaining positions will be left unfilled.] It expects to save approximately Sk5.5 million (€1.43 million) per year. By comparison, the audit cost the ministry Sk4.8 million.

The State Service Office says that the audits used on the ministries were geared toward optimizing employees. It prefers an international audit model, the Common Assessment Framework (CAF).

According to Mišovičová, the CAF is a tool for complex evaluation while the personal audits applied by most of the ministries simply helps minimize employee redundancies in a given moment.

"The CAF model looks at organization's function and complexity and identifies areas for improvement. The audit [used at the ministries] makes recommendations to eliminate positions or change the organizational structure without asking how the organization is meeting its mission. This is the main difference, and why we object to the audits," Mišovičová told the Spectator.

Among the state organizations that use CAF are: the ministries of economy, health, environment, education and regional development; the Office for Normalization, Metrology and testing, the Public Procurement Office and State Service Office.