THE MASSIVE traffic jams caused by the recent partial closure of Prístavný Bridge showed city officials just how desperate Bratislavans are for multiple ways to cross the Danube. On September 5, in the wee hours of the morning, residents got their wish when a city bus rolled onto the Apollo Bridge. 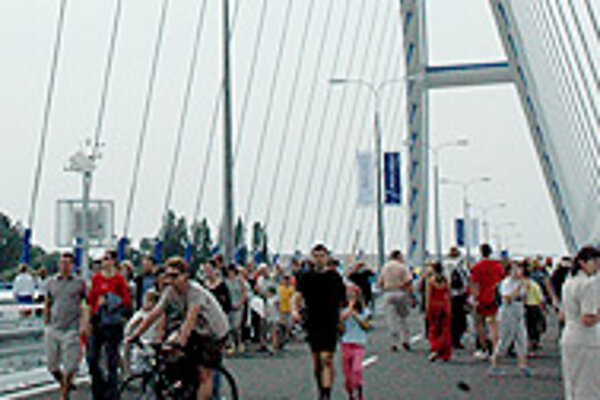 Font size:A-|A+0
THE MASSIVE traffic jams caused by the recent partial closure of Prístavný Bridge showed city officials just how desperate Bratislavans are for multiple ways to cross the Danube. On September 5, in the wee hours of the morning, residents got their wish when a city bus rolled onto the Apollo Bridge.

The Apollo is Bratislava's long-awaited fifth bridge. It essentially links the Nivy neighbourhood near the main bus terminal with Petržalka.

"The fifth bridge will significantly reduce the traffic load on other Bratislava bridges, in particular on Prístavný and Nový most," Bratislava city council spokesperson Milan Vajda told The Slovak Spectator.

According to Vajda, Danube river crossings are the most critical traffic points not only in Bratislava, but also within Slovakia.

The need for a fifth bridge is clear when you look at recent statistics. About 430,000 Bratislava residents have almost 240,000 cars registered with the city. "It's an unbelievable index of one car per less than two people," said Vajda.

Bratislavans welcomed the Apollo with great passion. About 30,000 people attended the ceremonial opening on September 4, taking the opportunity to walk under the bridge's high arches along the road.

Despite its positive reception, many locals are complaining about the consequent havoc wreaked on the city's public transport system. Bus and tram schedules have changed completely to accommodate the Apollo, thus throwing commuters into chaos just when the new school year is starting.

Plans for further development of Bratislava already count on a sixth bridge across the Danube. Unlike the Apollo, which Vajda calls a "classic city bridge", the sixth bridge will be built south of Slovnaft to form part of a so-called "zero ring" around the capital.

Marta Čarnogurská with Metro Bratislava, the company that financed the Apollo, told the SME daily that the proposed sixth bridge would deflect traffic from Austria, Hungary and the Czech Republic. Costs are estimated at about Sk30 billion (€780 million), although construction will not start earlier than 2010.

The Apollo Bridge opened 31 months and two days after the launch of its construction on February 2, 2003.

The project cost more than Sk4 billion (€100 million), of which Sk1.8 billion (€50 million) came from the state budget, €45 million was a loan from the European Investment Bank, and the city council added the remaining Sk400 million (€10 million).

During bridge construction, crews had to remove crude oil and contaminated soil, a leftover from an old refinery that was destroyed during World War II. This alone cost €10 million.

The cable-stay Apollo Bridge is likely "the only bridge of its size designed askew and curved in plan", bridge designer Miroslav Maťaščík told The Slovak Spectator. The unique design was required to join existing roads on either side of the riverbank.

To save money, the bridge was first built on the riverbank. In September 2004, crews positioned the completed bridge using four tugboats. It was the first time a bridge this large was put in place this way. The operation attracted thousands of spectators.

Basic measures of the four-line bridge

What's in a name?

The Apollo Bridge was not named after the American spaceship as many people think, but after a crude oil refinery built in 1895 that once stood where the Apollo meets Košická road. The refinery was destroyed when allied forces bombed Bratislava on June 16, 1944. The attack took 200 lives.

The Apollo refinery was named after the god of the sun, prophecy, shepherds, arts and poetry. During the heyday of Apolka, as people familiarly called the company, it owned oilfields, tankers, road tankers, and a network of petrol stations across Europe.