A HARD-FOUGHT 1-1 draw with Latvia left the Slovak national football team even on points with Russia going into the final two games of the World Cup qualifying round. 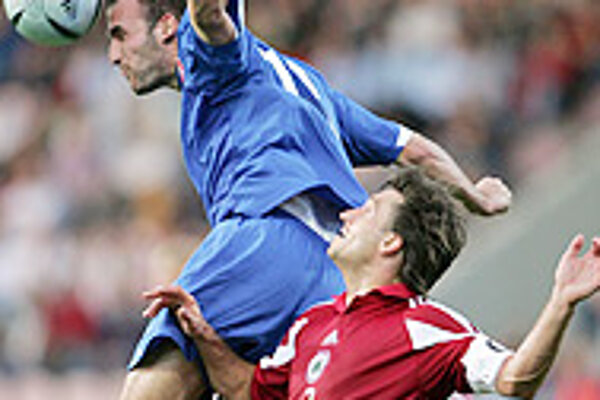 Font size:A-|A+0
A HARD-FOUGHT 1-1 draw with Latvia left the Slovak national football team even on points with Russia going into the final two games of the World Cup qualifying round.

With Russia drawing 0-0 at home with Portugal in the only other significant Group 3 match played September 7, Slovakia's chances of advancing were reduced to a simple formula: If Slovakia wins at home against Russia on October 12, it will at least battle in a playoff round for the final three spots at the World Cup's main competition in Germany in 2006.

While the national side has its fate in its own hands for the first time in World Cup competition, the Slovak football community expressed disappointment at not winning against Latvia, especially after performing well in a 2-0 defeat of Germany in a friendly international game on September 3.

"It was a pity we didn't convert the chances we had late in the game," said coach Dušan Galis after the match.

"We simply lost two points we had in the bag. Latvia hardly offered anything in the way of play, and it was obvious they had great respect for us," said former national team striker Tibor Jančula. "It's too bad we didn't capitalize on that."

After an opening flurry of activity from Latvia, Slovakia settled down and had several solid chances before a header from striker Róbert Vittek gave his team the lead in the 35th minute.

In the second half, however, Slovakia went into a defensive shell, and after goalkeeper Kamil Čontofalský was penalized in the 74th minute for holding on to the ball longer than the six seconds officially allowed, Latvia scored off the indirect free kick inside the box. The low drive found a hole in the wall of Slovak players.

"Football is all about mistakes, and Čontofalský made one that led to the tying goal," said Galis. "That just can't happen."

Slovakia has two matches left in the qualifying round, both at home: Estonia on October 8, and then Russia four days later. If Slovakia beats Estonia, and Russia wins over last-place Luxembourg, a 0-0 or a 1-1 tie will still see Slovakia advance. But a victory would make it certain, no matter what happens in the penultimate matches.

"The math is very simple, and we can all do the sums," said Galis.