SLOVAKS who are fully qualified to teach foreign languages in elementary and secondary schools say teaching is their last choice of profession. Their foreign language skills, especially English, command significantly higher salaries in the business sector. 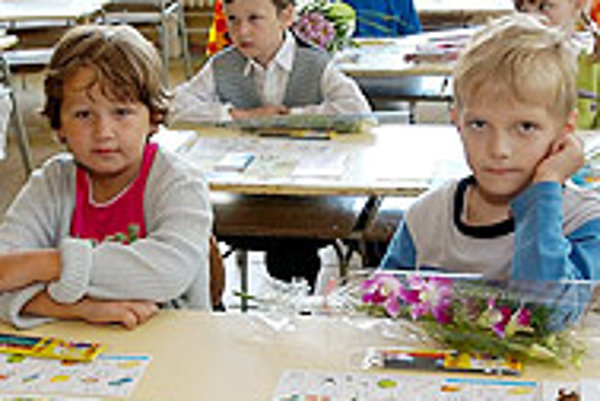 Font size:A-|A+0
SLOVAKS who are fully qualified to teach foreign languages in elementary and secondary schools say teaching is their last choice of profession. Their foreign language skills, especially English, command significantly higher salaries in the business sector. Only real enthusiasts and those fresh out of school unable to find something better decide to pursue teaching as a career.

Teaching is one of the lowest paid jobs in Slovakia that requires educated labour.

To help public schools legally hire English and German teachers in the 1990s, the Education Ministry lowered the qualification requirements. Foreign language teachers no longer need a university degree; it is enough for them to pass their state language exams. Though the measure was originally intended as a short-term solution to the teacher shortage, the ministry has decided to prolong it.

Critics say the lowered standards are reflected in the most recent high school exit exams. Students did poorly in foreign languages.

The ministry maintains that without lowered requirements, many state schools would be unable to offer its students foreign language classes.

"A shortage of foreign language teachers is a problem for schools not only in Slovakia but also in Europe," Mária Nemcová, the Education Ministry's press secretary, told The Slovak Spectator. "If we had not [prolonged the measure lowering requirements], we would lack languages teachers."

Jozef Lužák, the vice-president of the trade union representing school and science employees, defends the fact that less-qualified teachers who fall under the ministry's exception earn the same pay as those with university degrees. He says that school directors must offer a living wage to those willing to teach, even if they lack a master's degree, or face having no teachers at all.

Lužák believes that individuals who have passed their state language exams are qualified to teach foreign languages.

Mária Richnavská, a state school inspector, agrees with the measure but says that the level of professionalism among foreign language teachers is not ideal.

"Because such teachers are not fully licensed professionals, the language skills of their pupils are not as developed as they should be. The less-qualified teachers tend to focus on reading and translating texts. They do not help develop the students' conversational skills," Richnavská told the Spectator.

She thinks furthering teachers' education could help. For example, schools could oblige their less qualified staff to attend education methodology courses, at the school's expense. Richnavská acknowledges that schools in bigger cities would have the financial resources as well as the access to relevant methodology centres to pursue this solution while schools in smaller towns and villages would not.

High foreign language teacher turnover exacerbates the problem. Sometimes students go through a new teacher every year. Additionally, schools are unmotivated to invest in a teacher intending to leave after their initial year.

Lifting teachers' wages is very likely the key to solving teacher shortages. Even after the last salary hike in July, however, the salaries of teachers are woefully low compared to the commercial sector.

The Education Ministry has a tough job. According to school inspector Richnavská, even students at pedagogical universities studying to be teachers say they will look for employment outside the profession. "Under these circumstances, the exception [allowing less-qualified teachers to teach at equal pay] is needed," she said.