OPERA diva Edita Gruberova will open this year's Bratislavské hudobné slávnosti (Bratislava Music Festival - BHS) on September 14, nine days before the first notes of the festival's opening concert are heard, in a concert version of Gaetano Donizetti's Roberto Devereux. The earlier opening was scheduled to fit the star's crammed calendar, which gets tighter with each passing year. 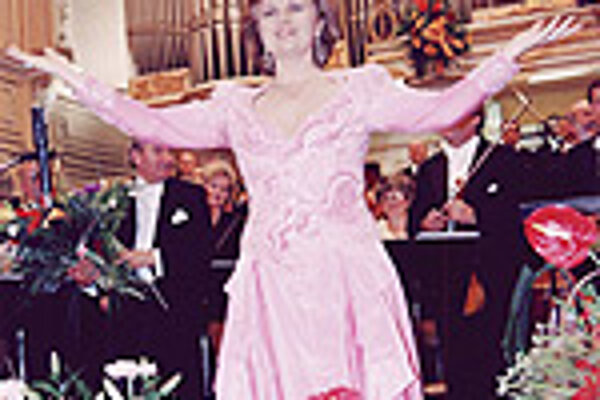 Font size:A-|A+0
OPERA diva Edita Gruberova will open this year's Bratislavské hudobné slávnosti (Bratislava Music Festival - BHS) on September 14, nine days before the first notes of the festival's opening concert are heard, in a concert version of Gaetano Donizetti's Roberto Devereux. The earlier opening was scheduled to fit the star's crammed calendar, which gets tighter with each passing year.

"I am honoured to bring this musical 'crime story' to the Slovak viewer," said Gruberova. The singer lived in Bratislava for 24 years but settled in Austria after the Communist regime forced her to emigrate in 1970.

"The Queen of Coloratura", as critics call her, considers Roberto Devereux to be one of Donizetti's greatest works, alongside Lucia di Lammermoor. Gruberova has staged four different versions of the opera, which is set in 16th century London. The opera was last staged in Slovakia in 1840.

Gruberova will sing the part of Queen Elisabeth. Michal Lehotský, Andrea Ulbrich and Albert Schagidullin will perform with her, accompanied by the Hungarian National Choir and the Slovak Philharmonic, under the baton of Friedrich Haider.

"I am looking forward to [meeting] my co-performers with expectation and curiosity," said Gruberova. She is especially enthusiastic about fellow Slovak Lehotský, a tenor in the Slovak National Theatre Opera's ensemble, whom she has heard on CD but has not yet met.

On the day of the opening celebration, Gruberova will also introduce a new book that narrates the path of her career. It captures her beginnings as a singer, reputedly in a pear tree in her parents' garden, and her teacher's and priest's urgings to become an opera singer, while the little Edita had no idea what that meant.

The book is accompanied by a CD. It contains a section where Gruberova sings with the Slovak Philharmonic Choir, which she considers one of the best in the world, but which needs to "spread its wings more into the world".

Gruberova, who acts as the Bratislava Music Festival's honorary president, regularly visits Slovakia. She has been working on importing the internationally successful model for taking care of abandoned children, the SOS Village. However, her efforts to start such a project in Slovakia were halted by the country's laws, which define a different philosophy on abandoned children's care. Nevertheless, she has not given up.

Piano virtuosos dominate this year's Bratislavské hudobné slávnosti. Among them are American Tzimon Barto, German Martin Stadtfeld, Hungarian András Schiff and Polish Jan Krzysztof Broja. Violin masters will appear towards the end of the festival. Vadim Repin, who Yehudi Menuhin called the best violinist he ever heard, will perform his violin recital on October 6. Great violinist Vladimir Spivakov, accompanied by the Slovak Philharmonic, will close the BHS a day later.

"The festival enters its fifth decade of its existence with a new - in fact, a restored - main organizer, the Slovak Philharmonic," announced Miloš Jurkovič, chairman of the festival's committee. Over the last several years the Music Centrum in Bratislava has prepared the festival.

"Eleven conductors, six symphonic orchestras and four vocal bodies from abroad will be our guests; but these are just bare numbers, hiding the promises of outstanding spectacular moments - including the first Bratislava appearance of the phenomenal London's Royal Philharmonic Orchestra, and the Mexico City Philharmonic Orchestra with a stylish 'Latino' programme," Jurkovič said.

He added that the festival will also mark the 60th anniversary of the end of World War II. The horrors of war will be commemorated at the festival with a performance of Benjamin Britten's War Requiem, Prokofiev's War and Peace, and Beethoven's Eroica.

Opera and ballet from the Slovak National Theatre will lure BHS visitors with a handful of performances from its repertoire.

Tickets for concerts are on sale at the Slovak Philharmonic's building on Palackého 2 and for opera and ballet performances at the Slovak National Theatre's booking office on Komenského námestie. For more information please visit www.bhsfestival.sk.