Masters of their craft

NOWADAYS we are used to machines doing all the work for us, but we are still amazed to watch skillful hands at work. 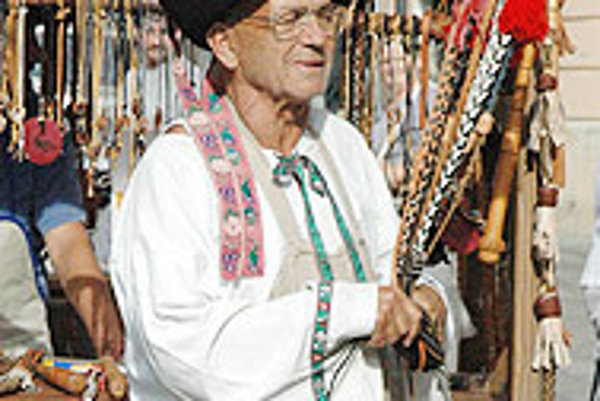 Font size:A-|A+0
NOWADAYS we are used to machines doing all the work for us, but we are still amazed to watch skillful hands at work.

Every first weekend in September top-class Slovak handicraftsmen gather in Bratislava for the ÚĽUV Masters' Days. ÚĽUV, which stands for Ústredie ľudovej umeleckej výroby, is an organization dedicated to researching and preserving the heritage of artistic folk crafts, and is the main organizer of the event.

Visitors gather in throngs around these bearers of tradition to watch them decoratively carve wooden instruments, artistically bend wire into bowls and jars, and form cornhusks into baskets and dolls. They examine the complicated laces and colourful patterned fabric spilling out from weavers' looms, and try to guess the speed

of tiny ladies' hands flashing with needles and threads.

The annual gathering was all the more special this year because ÚĽUV is celebrating its 60th anniversary. Slovakia's president, Ivan Gašparovič, and Martin Stüssi, the secretary general of the European Folk Arts and Crafts Federation, were present at an awards ceremony for top craftsmen.

"As a former manager of a similarly large Swiss organization, it was fascinating to observe how fast ÚĽUV has grown into a strong enterprise," said Stüssi, who in the past even joined one of the ÚĽUV's workshops, the result being a wooden rooster that now sits in ÚĽUV's courtyard at Obchodná 64.

ÚĽUV currently manages several retail stores around Slovakia. Its Bratislava headquarters has a gallery and a library and holds workshops and seminars. The nearby Design Studio at Dobrovičova 13 shifts the focus from

tradition to the present day, hosting exhibitions of modern designers who draw inspiration from the past. The

organization opened its first regional centre in May in Banská Bystrica and plans to open another one in Košice.

According to its director, Milan Beljak, the development of ÚĽUV has come in phases. Founded in 1945 by presidential decree, it first focussed on researching and founding cooperatives, such as the pottery centre in Pozdišovce or woodcarving workshop in Rajec. Such personalities as photographer Karol Plicka and painter

Ľudovít Fulla have served on their administrative boards.

By 1989 ÚĽUV had around 1,300 members and expanded its focus on the production, sale and education of young people, to assure its continuation. The end of Communism in 1989 required adjustments. "It was not easy to save the organization. Evidence [of the difficulty] is that its 'sister' organization, the Czech ÚĽUV, collapsed."

But Slovakia's Culture Ministry has made sure that Slovaks do not forget the traditions of their forefathers.

Many crafts-people join the organization, even if they are given a difficult "baptism", such as that experienced by fujara maker Pavol Bielčik from Kokava nad Rimavicou.

"I've always been interested in carving Slovakia's typical long pipe, the fujara. But at the end of the 1960s, when I brought my products to ÚĽUV, they told me they were a 'waste of wood'. I learned that I didn't use the right technique, or decoration. So I left. I continued doing it my way. But then I changed my mind and returned. They sent me to [now deceased] master Rybár in Detva, warning me of his hostile thoughts against the then-regime that took his property. But we got along and since then I have stayed with ÚĽUV."