WITH the minority government unable to muster enough votes to start the parliamentary session after the summer recess, Slovakia is heading towards early elections.
The opposition has stubbornly blocked the opening of parliament since September 12. Some ruling parties say that early elections are the only way out. 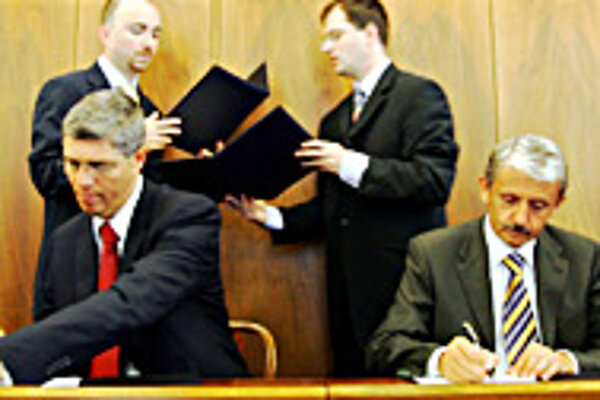 Font size:A-|A+0
WITH the minority government unable to muster enough votes to start the parliamentary session after the summer recess, Slovakia is heading towards early elections.

The opposition has stubbornly blocked the opening of parliament since September 12. Some ruling parties say that early elections are the only way out.

"[Let's have] early elections as soon as possible. We will not be held hostage to the opposition or independent MPs [who refuse to initiate a parliamentary session]," Bugár told a press conference.

But Prime Minister Mikuláš Dzurinda would not give up the idea of completing the regular election term, which extends until fall of 2006.

At a press briefing held September 14, the PM said, "I am still a bit reserved on the issue of early elections."

The minority government will most likely target independent MPs in the upcoming talks in an attempt to gain their support. Unofficial sources suggest that the cabinet is well on its way to securing the needed 76 votes needed to initiate the start of the parliamentary session.

"The current situation is because the Communists in parliament, headed by Robert Fico, used the fact that I decided to recall Pavol Rusko [from his position as economy minister] and that Rusko decided to take revenge," said the prime minister.

Rusko was dismissed from the cabinet on August 23 for an alleged conflict of interest involving a Sk104.5 million (€2.7 million) loan from a businessman active in the energy sector, for which Rusko was directly responsible.

Rusko, chairman of the New Citizen's Alliance (ANO), withdrew from the ruling coalition and joined the opposition together with three ANO MPs. The remaining nine ANO MPs splintered from the main ANO caucus and remained with the ruling coalition to support the Dzurinda cabinet. This splinter group, led by Ľubomír Lintner, was expelled from ANO.

According to the prime minister, Fico's misuse of the situation and Rusko's revenge "clearly damages Slovakia, evokes uncertainty in foreign investors and creates a picture of instability".

Soňa Szomolányi, political analyst with Bratislava's Comenius University, agreed that time was running short for Fico, a steady opponent of the right-wing government.

"Fico knows that the longer the ruling coalition lasts, the more visible the [positive] results of their work will be," she said.

According to Dzurinda, Fico's motivation is power and economic interest.

Szomolányi does not think early elections are the only solution.

"Early elections are still not for sure. There are still other ways. The SMK and Christian Democratic Movement (KDH) officials are creating pressure for it, especially on the independents. But they have a week for talks," Szomolányi told The Slovak Spectator.

"Not all of those who have been blocking the start of parliament are Communists," he said, suggesting that some independent MPs could be talked into supporting the minority government.

SMK's Bugár said that his party would not mind if early elections were held in March or April of next year.

"I think that some parties actually got scared [when they heard] that the elections could be so soon," Bugár told the press, adding that among these parties was the opposition Movement for a Democratic Slovakia (HZDS).

HZDS officials said that the best date for early elections would be June, which is just three months ahead of the planned regular election date.

Political analysts call the June date "advanced elections" rather than "early elections" because it is so soon before the end of the regular term anyway.

"Most parties would actually favour the advanced date of elections [rather than early elections]," said Grigorij Mesežnikov, political analyst with the Institute for Public Affairs, a think tank in Bratislava.

The exception is Smer. A stable leader in voter preference polls with a support of around 30 percent, Smer has no reason to hold the date of elections back.

However, in order to achieve early elections, MPs must approve a law shortening the current term. This law must be approved by a two-thirds constitutional majority of all MPs; that is, 90 out of 150 legislators must vote for it.

In the Slovak parliament, there are more than 20 independents who have little chance of re-election. In addition, opposition parties are still divided on the possible election term.

"To what extent the plans of the opposition [with early elections] are will show in the coming days," said Mesežnikov.

Unlike Szomolányi, however, Mesežnikov thinks that political talks will concentrate on the date of early, or advanced, elections rather than under what conditions the independents or the opposition would agree to keep the current cabinet in power until the end of the regular term.

"The demands of the opposition, the conditions in which they would back the minority cabinet, may be hard to meet. Smer wants privatization to be halted; HZDS wants the cabinet reconstructed with representatives of all parliamentary parties in it; it's complete nonsense," said Mesežnikov.

Analysts agreed that even if early or advanced elections were held, it would not be a tragedy.

"The Dzurinda cabinet is quite a success in terms of reforms. The economy is stable and going in a positive direction. [Early elections] would not be the end of the world," said Mesežnikov.

Szomolányi agreed. "Early elections are nothing unusual in democratic states. It is a legitimate political tool. Look at Germany, where [the chancellor Gerhard] Schröder himself asked for early elections to be held," she said.

PM Dzurinda maintains, however, that "my priorities are elsewhere than early elections".