Interview: Truth lies at the theatre

APPROACH the Truth is the motto that frames the main programme of the 14th International Theatre Festival Divadelná Nitra. It offers "socially involved art", performances with a large dose of authenticity.
Their inspiration comes from information gathered in the media, interviews, and genuine documents, reflecting the issues that resonate in society as a whole, as well as in people's personal lives. Darina Kárová, the festival's director, reveals more. 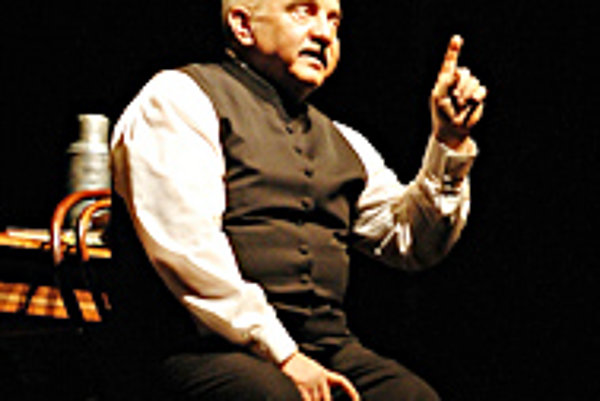 Font size:A-|A+0
APPROACH the Truth is the motto that frames the main programme of the 14th International Theatre Festival Divadelná Nitra. It offers "socially involved art", performances with a large dose of authenticity.

Their inspiration comes from information gathered in the media, interviews, and genuine documents, reflecting the issues that resonate in society as a whole, as well as in people's personal lives. Darina Kárová, the festival's director, reveals more.

The Slovak Spectator (TSS): Why did you opt for such an objective?

Darina Kárová (DK): There is quite a strong tendency in contemporary European theatre towards social, political and economic themes, processed with the highest possible degree of authenticity. As if the creators felt the need to cut the path between their testimony and its recipient, to communicate directly the problems that bother as well as fascinate them. We wanted to present this tendency. The motto [Approach the Truth] came about after we had selected the festival's programme.

TSS: Which performances are the most provocative, the most inspiring?

DK: The Hungarian play BLACKland is a pointed parody of the contemporary political situation. It doesn't shy away from nudity or vulgarity, there are jokes and great music. Or the play Renata Kalenská, Lidové noviny by HaDivadlo from the Czech Republic - it's a crazy grotesque, where the world is a madhouse with utterly real celebrities and politicians living around us. A gift HaDivadlo brings for a Slovak audience is a skit on Vladimír Mečiar [HZDS leader and former PM]. At the end, the real Kalenská [a journalist from the Lidové noviny newspaper, whose interviews were the basis for the play] will enter the stage with her guests.

TSS: What different approaches do the plays adopt to get closer to the truth?

DK: The themes are like newspaper cuttings: political responsibility, corruption, our fellow citizens' collaboration, the loss of taste, the decline in values, poverty and young people committing suicide. But the forms are different: for example, there is a poem about a trader at a stock exchange, or the theme of a hydrogen as the fuel of the future portrayed through a dance. Texts of the plays are composed from articles, authentic testimonies, research performed in the field or press releases sent via mobile-phone text messages.

TSS: Who are the creative minds behind the plays?

DK: I am surprised how many young people [the average age of Divadelná Nitra directors is 35] think about serious problems in society and have intense opinions about various perceived threats, such as globalization, ecological catastrophes, or the loss of cultural identity. The inflow of information today is fascinating and nightmarish at the same time. One can learn a lot but also lose a lot - such as privacy, illusions and hope.

TSS: How does Slovak theatre reflect this phenomenon?

DK: Slovak theatre is searching for its identity. It is still hesitating on whether it wants to entertain and earn money or reach into the depths of people's thinking.

TSS: The Slovak play Tiso is a kind of modern pioneer in approaching the truth at a political level. The subject of Slovakia's wartime president Jozef Tiso, who, as the leader of a pro-Nazi regime allowed the deportation of Slovak Jews, is a sensitive issue. Is it evidence of a need in Slovak dramatists to explore socio-political issues on stage?

DK: Here - as well as in other post-Communist countries - there is an aversion to politically or socially engaged theatre. We had enough of it during Communism. But art cannot avoid certain themes. Tiso is about an unsolved trauma in the Slovak nation, two-facedness and the opening of taboo issues. It is very welcome.

TSS: Is such a "search for truth" a theme that really appeals to audiences? Or is it something that has to be forced on an audience?

DK: In these times, which are so contaminated with reality TV, the theatre offers another reality, one that is free of kitsch, false emotions and basic instincts. Though the content of our performances is serious, the form is attractive: we often laugh, heartily and deeply. This is what the avant-garde theatre of today is.