A generous spirit of sympathy

FEW directors, if any, love their characters - and their actors - as much as England's Mike Leigh. His films unfold quietly and economically, as brief lines of dialogue and subtle facial expressions communicate as much information and emotion as most other movies take their entirety to suggest. 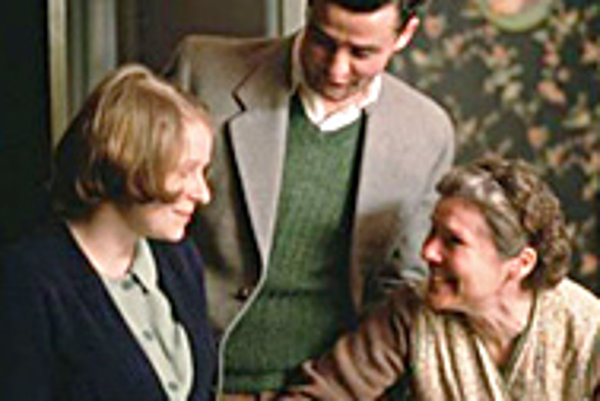 FEW directors, if any, love their characters - and their actors - as much as England's Mike Leigh. His films unfold quietly and economically, as brief lines of dialogue and subtle facial expressions communicate as much information and emotion as most other movies take their entirety to suggest. Leigh devotes generous attention to all his characters; quite frequently, the most poignant moments come not from his protagonists, but from characters in the periphery.

Like so many of Leigh's films, Vera Drake, which is set in London during the 1950s, is as devastating as it is compelling. Its title character, played beautifully by Imelda Staunton, begins the film bravely making do with what little she has and ends it with nothing more than the possibility of regaining what she's lost. Her dramatic fall is undeniably tragic. But the movie's most heartbreaking moment comes from a secondary character.

During an exceptionally tense family Christmas party, Reg (Eddie Marsan), the new fiancée of Vera's daughter Ethel (Alex Kelly), attempts to brighten the mood by declaring the evening the best Christmas he has spent in years. In addition to ironically underscoring the tragic situation hovering over Vera and her family, this short monologue becomes especially moving because it's undoubtedly true: Following his mother's death during World War II, Reg had lived a mostly solitary life until the ever-kindhearted Vera had welcomed him into her home with open arms.

Little moments like this populate all of Leigh's movies. They give his characters an uncommon richness that, in turn, infuses his films with a rare complexity.

For the most part, Vera Drake retains this all-embracing compassion. However, one important character verges on caricature - a depiction Leigh would usually reserve for his more comedic films. In partial detriment to the movie, Vera's sister-in-law, Joyce (Heather Craney), frequently comes across petty and self-centered. She would be completely unlikable, if not for Leigh's delicate insight into her character. Far younger and stylish than her in-laws, Joyce is also pregnant - something that gains particular resonance given the source of Vera's difficulties.

After years of graciously caring for all those who cross her path, Vera learns that her boundless generosity has come back to haunt her. While making money housekeeping so that her family, friends, and oftentimes her neighbours can remain clothed, fed, and housed, she has also given help of a slightly more specialized - and illegal - nature. Feeling strong sympathy for - or perhaps even empathy with - young pregnant women whose financial and social standing makes the idea of children unfathomable, Vera has regularly performed backroom abortions.

When one of these young women nearly dies, the police come after Vera, whose subsequent arrest severely rattles her and her shocked family, who previously knew nothing about this aspect of her life. In the period leading up to her doomed trial, Vera and her family learn uncomfortable truths about one another and those they thought had been their friends. This section of the film focusses so much on their misery that it becomes almost unbearable. Leigh, so often in this film and others a master of understatement, overplays his hand a bit by wallowing in Vera's understandably great distress.

Thus, Vera Drake is not as effective as a pitch-perfect work like 1996's Secrets & Lies. But any Mike Leigh film, however difficult to stomach, is a cause for celebration.