AFTER more than a week of parliamentary impasse the ruling coalition managed to gain sufficient support to open the chamber with 77 MPs presenting themselves for the formal start of the session on September 21. 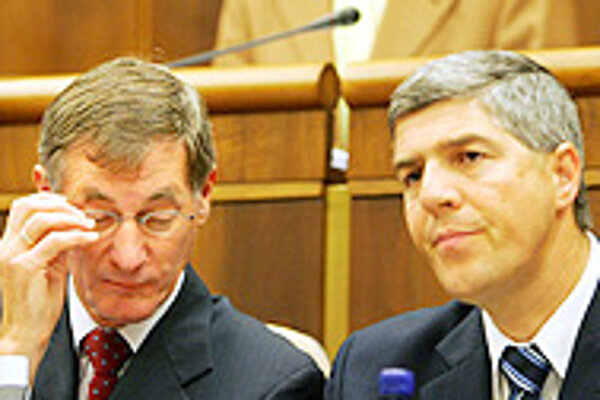 Font size:A-|A+0
AFTER more than a week of parliamentary impasse the ruling coalition managed to gain sufficient support to open the chamber with 77 MPs presenting themselves for the formal start of the session on September 21. After a replacement for a deceased MP from the ruling Hungarian Coalition Party (SMK) was sworn in, the coalition achieved 78 MPs, the same number as after the 2002 national election.

Meanwhile, the Hungarian Coalition party (SMK) said it would not submit a draft law to parliament to cut short the current electoral term. The decision was made at a meeting of the party's leadership on September 22. The Christian Democratic Movement (KDH) is also no longer insisting on early elections.

SMK boss Béla Bugár said his party had changed its mind because it had calculated it would not be able to get the 90 votes in parliament needed to force early elections. Bugár also said that if they had submitted the draft bill it would "absolutely destroy relations in the coalition".

The SMK and KDH were considering submitting the draft bill calling for early elections because the autumn session of the Slovak parliament was delayed for more than a week. This was due to the blocking of parliament by the opposition and the ruling coalition's failure to find majority support.

"I am pleased that parliament has convened today but I am convinced that there is a deeper political crisis in Slovakia and with respect to the future of our political culture, that has to be addressed in a different way than by complacency with the fact that parliament can decide to open," Hrušovský told the press on September 21.

"We have doubts whether it is possible to rule like this for a longer time," added SMK Chairman Béla Bugár.

According to the SMK's Bugár, who hosted a press conference after the coalition council met, Dzurinda, an SDKÚ member, said that if the SMK submitted a proposal to parliament to cut the current election term, he would consider it a breach of the Coalition Agreement.

The price of the majority

Observers have speculated on the price that the coalition has had to pay to gain support from independent MPs in parliament.

While the opening of the parliamentary session was deadlocked, opposition leader Robert Fico of Smer said that the price to buy an MP's support was Sk15 million (€390,000) or more.

The coalition demanded that Fico produce proof of his statements and present it to the respective authorities in charge of investigating corruption allegations.

The departure of two opposition MPs from the Movement for a Democratic Slovakia (HZDS) to join the pro-coalition New Citizen's Alliance (ANO) caucus, however, prompted new speculation that HZDS made a deal with Dzurinda's SDKÚ to help the ruling parties stay in power.

According to Fico, the departure of opposition HZDS members to the ruling coalition was "proof of proofs" that MPs were being bought in parliament. He called on Dzurinda's coalition partners, the KDH and the SMK, to make it clear whether they considered this to be the style of politics they wanted to promote.

News that Eduard Kolesár and Karol Džupa, both staunch supporters of the authoritative HZDS leader, Vladimír Mečiar, would join Ľubomír Lintner's ANO caucus leaked to the press on September 19. Even with their support, however, the coalition failed to reach the required 76 MP quorum to open the parliamentary session.

Milan Hort of the SDKÚ blamed "technical problems" with the voting apparatus of independent MP Gustáv Krajči for the failure, as the coalition was just one vote shy of the 76 quorum.

On the next day, the coalition exceeded the quorum by one vote. Independent MP Ivan Šimko, a former member of Dzurinda's SDKÚ, also decided to back the coalition.

Independent MPs such as Krajči, also a former HZDS member, as well as his ex-HZDS peers, Miroslav Abelovský, Ladislav Polka, and Ján Gabriel, and Smer MP Bohumil Hanzel, supported the coalition. All of them have a history of backing the coalition. Several other independent MPs who, in the course of this election term, left the ruling coalition parties, also backed the Dzurinda coalition.

The only surprise came with the decision by Džupa and Kolesár to leave the HZDS who, until last week, showed no signs of unhappiness with their opposition party.

"If just hours before one of the most crucial moments in parliament two of the most faithful HZDS MPs decide to leave the party caucus, then I don't think this needs any more comment," Fico told the media.

Although the HZDS and the SDKÚ deny all allegations that they might have a deal, Fico does not stand alone in his suspicions.

Ľuboš Kubín, a political analyst with the Slovak Academy of Sciences, told The Slovak Spectator on September 20 that "an agreement between Dzurinda and Mečiar can well be behind this decision".

"It looks like Mečiar lent his MPs to the PM. The SDKÚ and the HZDS are parties for whom early elections are not advantageous," said Kubín.

"I had a problem and I had to solve it so that Vladimír Mečiar does not have to make decisions, take the responsibility and carry the consequences. There was nothing more and nothing less to it," Džupa wrote in a statement sent to the media on September 21.

His statement, however, did little to diffuse the speculation about the true reasons of his departure.

In the statement he celebrates Mečiar as a man who "in his political life had to make principled decisions. He made them and realized them. Many helped him but few shared the responsibility with him, including the consequences," Džupa wrote.

Džupa continued: "He created an imposing work, the independent and sovereign Slovak Republic," adding that while in the future "we will be in the dust of forgetfulness, [Mečiar] will be the brightest star in Slovak history".

Kolesár, meanwhile, said that he simply came to disagree with the political course that the opposition parties, including the HZDS, have taken since the end of the parliamentary summer recess.

His other reason for leaving the HZDS was the stance taken by the opposition on September 13, when the opposition blocked the SMK's attempt to replace a deceased SMK MP, Zsolt Komlósy. Kolesár felt that the opposition was misusing a human tragedy for political aims.

With the issue of early elections still open, the near future will show how firm the support of the independents and the ex-HZDS MPs really is.