The UN is more than a global discussion club

SLOVAKIA's local political storm and the threat of early elections overshadowed a global summit of the United Nations, one of the biggest events in the history of the organization. 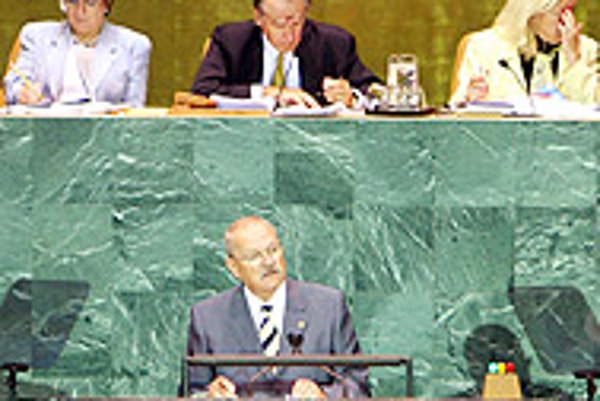 Font size:A-|A+0
SLOVAKIA's local political storm and the threat of early elections overshadowed a global summit of the United Nations, one of the biggest events in the history of the organization.

About 150 world leaders assembled in New York in mid-September to mark the UN's 60th anniversary. In a celebratory spirit, they hoped to reach consensus over the important issue of reform. Many members want to empower the United Nations through reform to allow it to better respond to the most urgent issues of the day, including poverty and threats to security.

Observers say that although world leaders are committed to fighting poverty and keeping the world safe, they have failed to achieve anything of significance through the United Nations.

President Ivan Gašparovič, in New York for the summit, said that if the UN failed to reform itself, member states would have to start looking for other means to secure their interests.

"The UN cannot be a discussion club that fails to find solutions," said Gašparovič.

According to the Slovak president, the UN has failed to deliver a global strategy on how to fight terrorism. He thinks that the organization must play a key role in the fight.

Despite the General Assembly's inability to agree on UN reform, Gašparovič had one reason to smile. Slovakia's aspirations to win temporary membership in the UN Security Council have not yet been dashed.

According to Kukan, Slovakia does not yet face a contender for the position. The Slovak Ambassador to the UN, Peter Burian, has already gained assurances from 172 countries out of the 191 members of the UN General Assembly that they would vote for Slovakia's temporary membership.

According to Kukan, Slovakia will operate within the UN Security Council in line with its operation within the European Union.

"The most important thing concerning Slovakia's potential non-permanent membership (to the Security Council) is to present our own opinions and not simply parrot the opinions of others," Kukan said.

Kukan regrets that the General Assembly did not approve reform that would have enlarged the UN Security Council from five to either nine or 11.

He told the news wire TASR that the council would now remain unchanged for another several years.

The Slovak Spectator talked about the UN summit and its importance for Slovakia with Head of the International Security Program of the Slovak Foreign Policy Association, Ivo Samson.

The Slovak Spectator (TSS): In your opinion, what was the most urgent topic discussed at the recent summit of the United Nations?

Ivo Samson (IS): The main focus of the summit was the necessity of reform. This crucial international organization has outgrown its original intentions since its establishment in 1945, when it included less than 50 nations. Today, it is 191-member colossus.

There are several levels at which the UN has been continuously failing over the years and the Security Council is one of them. In fact, I could say that none of the UN's three strongest bodies - the Security Council, the Economic and Social Council and its controversial Commission on Human Rights - have been fulfilling their original mission.

TSS: What impact would UN reform have on Slovakia?

IS: UN reform concerns Slovakia as it should all countries that became UN members after 1945. Currently the United Nations is based on an antiquated structure that no longer reflects the reality of world politics. For example, five chosen countries are permanent members of the Security Council. Among these, France and Great Britain, once colonial world powers in 1945, are today only regional actors in the European Union, but yet they hold these powerful positions. A motion to increase the number of permanent council members by other four or six countries failed after UN members could not come to a consensus on the matter, but it is naive to think that these permanent members will give up their position and influence so easily.

TSS: Assuming Slovakia is granted temporary membership to the Security Council, what will it mean to Slovakia?

If Slovakia is granted temporary membership on the Security Council, then for two years it will be among those countries voting on whether or not the UN would support military action somewhere in the world, or whether military intervention is possible without the UN's blessing.

TSS: How would membership affect Slovakia's economic and foreign policies?

IS: Economically and financially Slovakia will gain almost nothing. For one, Slovakia will have to spend money on its UN Security Council membership. On the other hand, considering the fact that Slovakia's diplomacy is still young and inexperienced, I think it will be a great learning experience for our country's diplomats. Slovakia will have to actively monitor happenings all around the world and it will have to learn to prepare and compile precise and exact analyses. It means that within two years Slovakia will acquire the skills of an important world player.

TSS: Do you think that Slovakia will be granted temporary membership?

IS: The system of granting temporary membership in the Security Council is anachronistic. However, the system still secures one position for Eastern European countries of the former Soviet bloc and other former Communist countries, which is a benefit for Slovakia. Last time, when Slovakia was trying to become a temporary member, Ukraine also applied for the position and Slovakia failed to make it to the Security Council.

At present, no other Eastern bloc country has applied for Security Council temporary membership candidacy so it is assumed that Slovakia's election is almost 100 percent certain.

TSS: You mentioned that Slovakia would need to become more active on the world stage, not just in those affairs that concern Slovakia directly. Do you feel that Slovak diplomacy neglects significant worldwide events?

IS: Slovakia has been in a defensive position. We keep making the excuse, often justified, that Slovakia is still a young state, which does not have a tradition of high diplomacy like our neighbours Hungary, Poland or the Czech Republic. This is, in fact, a deficit. But Slovakia is an EU member now and the EU has its own foreign policy line, which means that the EU plays an active role on the foreign political field. By becoming a temporary member of the UN Security Council, Slovakia could play a significant role in co-creating the foreign policies of the EU.

TSS: Do you think progress was made at the recent Security Council summit? If so, please explain.

IS:As far as reform is concerned, I do not think that any progress has been made. The big players on the foreign political field are not interested in reforming the UN because the organization suits them the way it is.