THE KAREL Appel exhibition at the Danubiana museum in Čunovo near Bratislava assaults the senses as soon as you enter the spacious building. The artist's spontaneous and expressive use of colour, his faux-naif style that unites five decades of work - paintings and sculptures, both small and monumental, dispersed on the ground floor and upstairs - literally lights up the space and soothes the spirit. 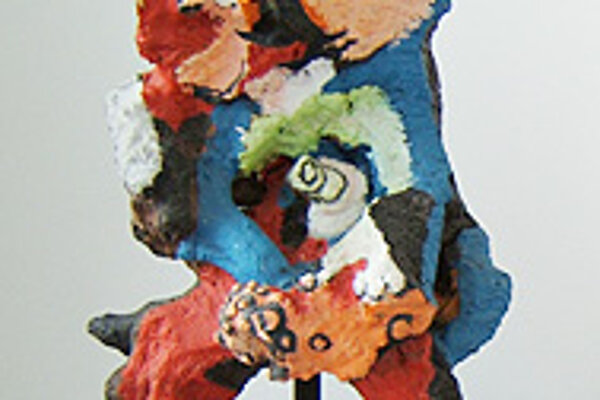 Font size:A-|A+0
THE KAREL Appel exhibition at the Danubiana museum in Čunovo near Bratislava assaults the senses as soon as you enter the spacious building. The artist's spontaneous and expressive use of colour, his faux-naif style that unites five decades of work - paintings and sculptures, both small and monumental, dispersed on the ground floor and upstairs - literally lights up the space and soothes the spirit.

Complementing the Appel exhibition are works from 20 Slovak artists, presented as homage to Appel's influence over many years. Six of Appel's poems, in English, attest to his long-lasting love affair with verse.

Born in 1921, Appel grew up in Holland. As a young man, he found inspiration in Leaves of Grass, by American transcendental poet Walt Whitman. In 1949, together with Danish and Belgian artists, Appel formed the Cobra group. Rejecting the rationalist Western approach to art, the Cobra group cast reason aside and put its faith in spontaneity. Two years later, Appel's works were presented in Paris alongside American abstract expressionists Jackson Pollock and Willem de Kooning.

By 1963 Appel was dividing his time between Rome and the USA. He started to experiment by inserting objects into his paintings, paving the way for his later sculptures. He used found objects, and experimented with assemblages of wood that he called "psychological relief portraits". In the 1990s he worked with American poets Allen Ginsberg and Gregory Corso on a series combining painting with poetry.

The exhibition contains several highlights. Catching the eye on the ground floor is a two-piece sculpture called Innocent Onlookers (1960). Two brightly painted abstract figures, made from olive tree trunks, stare into the gallery. The distinctiveness of the colours makes the figures seem animated. What they are witnessing, by the title's implication something bad, is left to the viewer's imagination. Perhaps it is this aspect that makes the figures timeless, "innocent onlookers" belonging to any age.

Hanging directly above Innocent Onlookers is a monumental work entitled Macho Woman (2000). The big-bottomed, busty figure is a swirl of energy and action: the antidote to, as Appel calls it, the "technological penitentiary" of the modern world.

On the upper floor are more large canvasses. Like his smaller pieces they have a childlike quality, but they are definitely aimed at an adult audience. Highlights here include The Potato People (1974), Boy with Donkey (1968), Personage III (1968) and its companion piece, Night Walk (1968).

One of the works, Awakening Liberation, provides an apt title to how the visitor feels when experiencing this wonderful exhibition.

Danubiana's setting is in itself well worth the journey. Situated on a small, artificial peninsula that juts out into a reservoir at the side of the Danube, the museum has a very dramatic setting, giving the feeling of a powerful point of energy and inspiration - a perfect place in which to view art.

The Forgotten Angels,
by Karel Appel

One smile, one angel smile
might burn the shadows on the roof
and let us see the stars
Like flowers