Politicians duke out differences on TV

THE ANIMOSITY between the ruling Slovak Democratic and Christian Union (SDKÚ) and the opposition Smer party has grown sharper over the last month. 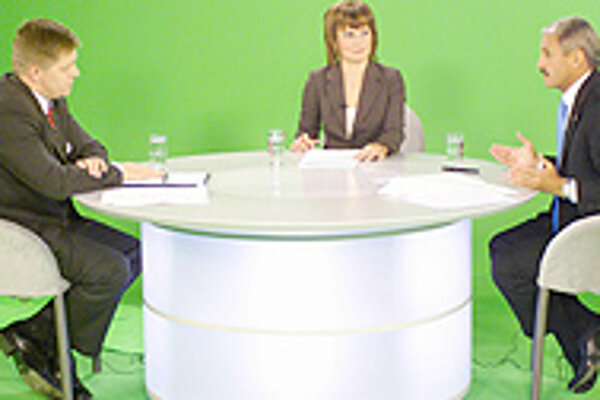 Font size:A-|A+0
THE ANIMOSITY between the ruling Slovak Democratic and Christian Union (SDKÚ) and the opposition Smer party has grown sharper over the last month.

With the two parties standing on opposite sides of the political spectrum, the leaders of Smer and the SDKÚ, Robert Fico and Mikuláš Dzurinda, respectively, have consistently attacked each other's policies and resorted to name calling.

Fico, in turn, accused Dzurinda of lacking character because the PM accepted support from MPs belonging to opposition Movement for a Democratic Slovakia (HZDS), a party once described by Dzurinda as "a party with bloody hands" according to Fico.

Fico also labelled the SDKÚ as an extreme-right party and painted Dzurinda's government as elitist.

Although established international organizations have repeatedly praised Slovakia's economic progress over the last few years, Fico insists that the "reforms carried out by the current government" are akin to "experimenting on people".

Verbal ping-pong between the two politicians on television scored one for Dzurinda when Fico stated that real wages had decreased by almost seven percent since Dzurinda took office in 1998.

The prime minister insisted that real wages had grown for the last seven years and challenged Fico to a bet.

In an attempt to point out other instances in which Fico lied, Milan Hort of the SDKÚ told the press that Fico, known for his pro-social rhetoric and a stern critic of right-wing policies, opposed compensation to people in material distress and handicapped persons. Fico had said earlier that the opposition had supported the compensation.

"Again it is confirmed that Fico is a regular liar," said Hort.

Earlier in September, Fico accused the SDKÚ of buying independent MPs in an effort to win a majority of votes to open the parliamentary session, which was deadlocked after the summer session. Although the cabinet had worked in a minority position for two years without problems, the departure of the New Citizen's Alliance (ANO) in August seriously weakened the cabinet's position.

The recent and unexpected decision of two HZDS MPs, Eduard Kolesár and Karol Džupa, to leave the HZDS in favour of the ruling coalition caused some to accuse the SDKÚ and the HZDS of secret cooperation.

Kolesár and Džupa joined the splinter ANO faction, led by Ľubomír Lintner, which stayed with the ruling coalition. On September 26, Lintner and his breakaway group said it would submit a criminal complaint to the police regarding Fico's accusations.

The source of the animosity

The growing animosity between Smer and the SDKÚ, according to political analyst Grigorij Mesežnikov with the Institute for Public Affairs, stems from the "programmatic differences between the two parties".

"There are also [bad] personal relations between Fico and Dzurinda, and Fico and [SDKÚ's Finance Minister Ivan] Mikloš," Mesežnikov said. "Naturally another aspect is Fico's ambition to get to power and the prime minister's to stay in power," he told The Slovak Spectator.

The analyst said that the recent abuse between the two political parties had become atypically.

"It is not usual for parties to slip into such strong verbal attacks," said Mesežnikov.

He thinks that both parties might see the conflict as a possible way to boost voter potential. PM Dzurinda, who until recently has remained relatively withdrawn, has exhibited a more confrontational tone.

"Perhaps he evaluated the impact of his recent tone and believes that a more confrontational approach could bring him votes. Smer, on the other hand, also became harsher in its comments," said the analyst.

He sees no space for a future cooperation between the two parties.

"Under the current leadership, cooperation between Smer and the SDKÚ is almost impossible."