NOT TO BE upstaged by Slovakia's footballers, the men's Davis Cup tennis team destroyed a highly regarded Argentine squad over the September 23-25 weekend to reach the finals of the international tournament. 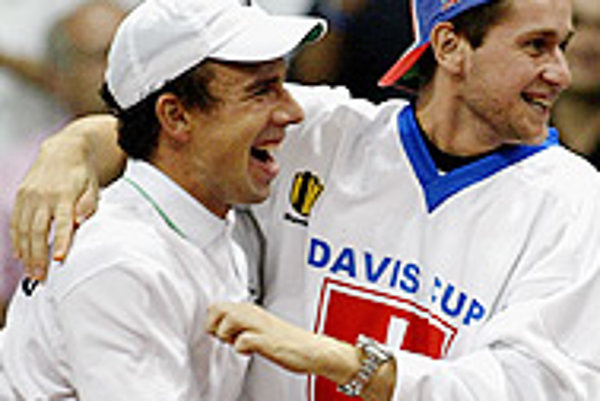 Font size:A-|A+0
NOT TO BE upstaged by Slovakia's footballers, the men's Davis Cup tennis team destroyed a highly regarded Argentine squad over the September 23-25 weekend to reach the finals of the international tournament.

Before play began it looked to be a mismatch, with Argentina fielding a lineup whose lowest-ranked player was still higher in the ATP charts than the top-ranked Slovak player.

But the first match between Guillermo Coria, the world No. 6, and Slovakia's Karol Beck (48) showed how little rankings can mean on the court.

Beck served well, struck his winners with precision, and took Coria in three sets, 7-5, 6-4, 6-4. The crowd, wearing white shirts with the Slovak national emblem that they had been issued on entry, chanted his "Be-kys" nickname as Beck broke Coria in the 11th game in the first set, the 5th game in the second, and the 3rd game in the third.

"It was my best performance in my Davis Cup career," said Beck after the match.

The Friday night match between the Slovak No. 1 (Dominík Hrbatý, 21st ranked) and David Nalbandian (12th) put the Argentines back in the contest, with their man taking the match 3-6, 7-5, 7-5, 6-3. Hrbatý seemed less sure in his returns than Nalbanian, and failed to take advantage of his chances to break.

Saturday's doubles match between the Slovak pair of Beck and Michal Mertiňák (171st ranked) and Argentina's Nalbandian and Mariano Puerta (10) confirmed that Beck's earlier singles victory was no fluke.

Puerta's left-handed serve gave the Slovaks problems, but as Beck claimed after the match, "it was the little errors that Nalbandian made that made the difference". The Slovak side won in three sets 7-6, 7-5, 7-6.

Hrbatý's dunk of Coria - 7-6, 6-2, 6-3 - in the decisive fourth encounter sealed Argentina's fate. "It was like a dream, a game that should go down in history," said Slovak team captain Miroslav Mečíť after Hrbatý's victory.

Slovakia beat Spain and Holland by the same 4-1 score earlier in the year to reach the semis, results that Hrbatý said were due to team play rather then individual excellence.

"This is proof that having the best players isn't a guarantee of success, and that if you get a good group of guys together, they can beat anyone," he said.

Slovakia's opponents in the Davis Cup final, which will be played December 2-4 in Bratislava, will be Croatia, who defeated Russia 3-2 over the same September weekend to reach the last round.

Croatia and Slovakia, among Europe's youngest nations, will be contesting the final for the first time.