ACCORDING to the Bestbetting online oddsmakers for Champion's League play, Bratislava's Artmedia football club is a 2,501:1 outsider to win the annual European tournament. In other words, if they win, a bet of four pence will earn you a hundred pounds. 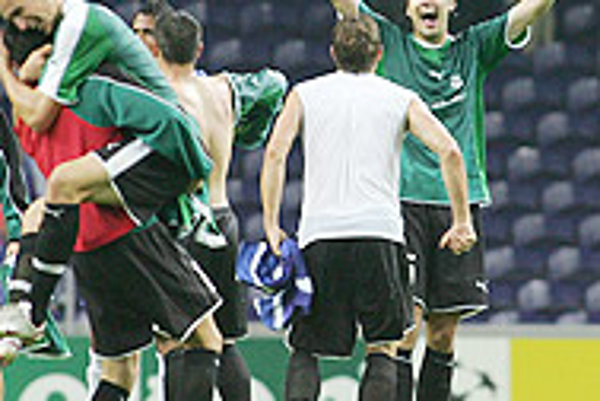 Font size:A-|A+0
ACCORDING to the Bestbetting online oddsmakers for Champion's League play, Bratislava's Artmedia football club is a 2,501:1 outsider to win the annual European tournament. In other words, if they win, a bet of four pence will earn you a hundred pounds.

According to various online oddsmakers before Artmedia's September 28 duel with Porto - the winner's of the Champion's League competition two years ago - Artmedia was a 10:1 outsider to win away in Portugal, and around 5:1 to draw.

In other words, betting on Artmedia would seem to be as sure a way of wasting your money as any yet invented.

Artmedia's performance at Dragao stadium in front of almost 40,000 Porto fans met many of the football world's expectations - they were at times thoroughly outclassed by the Portuguese side, they were down 2-0 before 40 minutes had been played, and they only managed three shots all match.

Except every one of those shots went in, and Artmedia goalkeeper Juraj Čobej thwarted at least two likely goals to allow his teammates to walk away exulting in a 3-2 win.

"This was a breakthrough victory for us," said captain Balázs Borbély, who tapped home a free kick from in close in the 74th minute to put his team ahead.

So how did it happen? How did Artmedia, a debutant in the Champion's League group round and virtually unknown in Europe before this summer, beat the top team in the Portuguese premier league, the winner of the World Clubs Cup, and a perennial Champion's League threat?

Artmedia Coach Vladimír Weiss ascribed the victory to a tactical change the team made at half time.

"We knew Porto's wingers attack a lot so our strategy was to take advantage of it, working the diagonals," he said after the match.

After midfielder Peter Petráš pulled Slovakia back to within a goal of Porto in first-half injury time, substitute Juraj Halenár threaded a fabulous diagonal pass to a breaking Ján Kozák, who calmly forced Porto keeper Vitor Baia to commit himself and slid the ball in the net.

"Our first goal picked up the team's spirit and got them to believe in coming back. After that, in the second half, we scored two more goals and from then on we didn't let the win get away," Weiss said.

Porto looked dangerous all night, especially their Brazilian talent Diego and South African striker Benni McCarthy, but their furious pressure late in the match failed to bring a tying goal.

"I'm ashamed of this result, but in football it happens that the favorite doesn't always win," said Porto coach Co Adriaanse. "They got their goals on quick counterattacks from standard situations we were setting up at the other end of the field."

Other Artmedia players had different explanations for the improbable result.

"Two days before the game I stepped in some dog shit, and assistant coach Michal Hipp said it would bring us luck," said Halenár. "And, you see, he was right."

Artmedia remains the underdog in its Champion's League group, which besides Porto includes Inter Milan and Glasgow Rangers. Inter leads the four-team table with wins so far against Artmedia and Rangers, while Porto, having lost its two matches, is in the cellar, and Artmedia and Rangers are even on three points.

However, with results like that against Porto and its 5-0 defeat of x Glasgow Celtic in July to launch its Champion's League drive, Artmedia may still be capable of a few shockers.

"We're a small city in a small country, but we have a big heart," said an emotional Weiss.

It may not be enough to reduce those astronomical Champion's League odds, but it adds enormous interest to Artmedia's November 1 home encounter with Rangers - cross-town rivals of the sadder but wiser Celtic.