Wilson and Vaughn: A happy marriage of merry actors

MUCH has been made recently in the movie trade papers about a group of young comic actors taking over Hollywood. Ben Stiller, Owen Wilson, Vince Vaughn, and Will Ferrell supposedly have studios in the palms of their hands, able to get a movie project greenlit with a mere snap of the fingers. 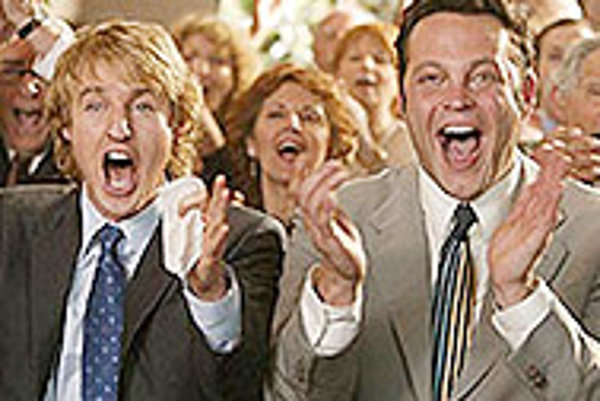 MUCH has been made recently in the movie trade papers about a group of young comic actors taking over Hollywood. Ben Stiller, Owen Wilson, Vince Vaughn, and Will Ferrell supposedly have studios in the palms of their hands, able to get a movie project greenlit with a mere snap of the fingers. Inevitably, some of the media coverage has been negative, arguing that their clique has such a strong hold over the movie industry that it's become virtually impossible to make a mainstream comedy without them. If Wedding Crashers is an example of this alleged domination, however, then Hollywood and moviegoers could be much worse off.

Simply put, Wedding Crashers is a joy of a movie. It's by no means perfect; it suffers slightly for its excessive length and for a few overly cheap laughs at the expense of stereotypical characters. But mostly it's good silly fun, a deceptively sweet movie carried effortlessly by its two highly charismatic and likeable leads, Owen Wilson and Vince Vaughn. The two work perfectly together; Wilson's laidback charm is a nice counterpoint to Vaughn's manic energy. But this is no surprise: One of the most obvious traits of Wilson, Vaughn, and their brethren is that they all have such an effortless rapport.

Effortless is a particularly appropriate word for this movie. After an amusing opening that sets up Jeremy's (Vaughn) and John's (Wilson) professional life (they're divorce mediators), the film moves into a roughly ten minute montage that shows the two in their element: showing up at weddings and schmoozing with the guests - all for the purpose of bedding women.

The montage moves seamlessly from one wedding to the next, in which John and Jeremy alter their personalities at will (good-hearted "mensches" at a Jewish wedding, booze-loving lads at an Irish one), catering their angle to each party and each woman. It's an impressive sequence, filled with quick joke after quick joke, building into a dance-and-sex-filled frenzy by the end, which then finds John and Jeremy sitting alone, clothes and hair disheveled, overlooking the picturesque Mall in Washington, DC, ruminating over their shallow and immature existence with a bottle of champagne.

To cap off the wedding season, John and Jeremy sneak into the nuptials of the daughter of US Secretary of the Treasury William Cleary (Christopher Walken). Here, they set their sights on Cleary's other daughters, both of whom prove to be far more than they bargained for. In Gloria (Isla Fisher), Jeremy finds someone whose lustful craziness matches - and even exceeds - his own. John, on the other hand, quickly becomes smitten with Claire (a luminous Rachel McAdams), a beautiful and self-possessed young woman who, unfortunately, has a longtime boyfriend.

When the two imposters are invited to a post-wedding celebration at the Clearys' summer home, John quickly accepts, ignoring the vehement protests of Jeremy, who's alarmed by Gloria's overzealousness. John sees the weekend getaway as an opportunity to win over Claire, a prospect greatly thwarted by the eccentric and dysfunctional extended Cleary family.

The movie at this point progresses with a series of comic mishaps - most cleverly executed, a few frustratingly unimaginative - that hinder John's advances towards Claire. This section and the subsequent one - in which John, distraught over his inability to be with Claire, isolates himself from everyone, including Jeremy - drag on a bit longer than necessary.

Walken and McAdams provide helpful support, but it's the sheer magnetism of Wilson and, particularly in this movie, of Vaughn that truly keeps things interesting, even as the story grows a bit slow and confused. If their overthrow of Hollywood means more movies like this, then bring on the revolution.