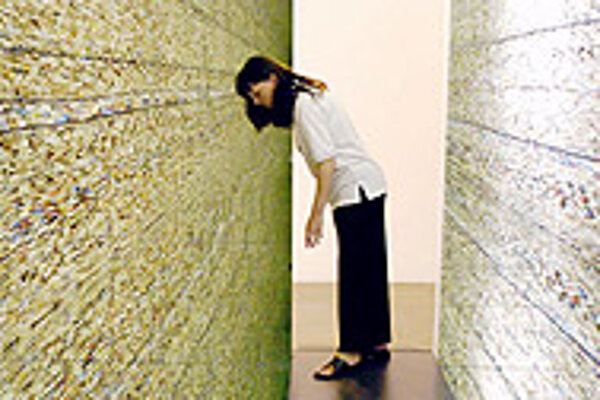 Font size:A-|A+0
RICHARD Gregor presents a new approach to permanent expositions in his 100 Years of Reality show at the Bratislava City Gallery.

"Permanent expositions in Slovakia, though working with excellent material, do not present their works in a live and inventive context. That's a big mistake," said Gregor.

The young curator's project is the third permanent exposition mapping Slovak fine art in the 20th century in the country, adding to the existing two in Dolný Kubín and Liptovský Mikuláš.

Instead of arranging the exposition chronologically, or basing it on individual artistic styles, the curator has chosen to arrange the exhibits thematically, depicting some of the phenomena that formed Slovak art over the last century.

The main theme, Realism and Reality, is supported by five more themes, which, for example, analyze works through their "construction", reflect pre-images and the wide range of influences integrated into individual works.

The exposition is the culmination of several exhibitions that Gregor has created for the gallery. The objects come from the gallery's acquisitions obtained over the last four decades, and the selection leaves space for additions in the future.

There are 80 works by 70 artists working in various media, ranging from painting and sculptures to installations and video art. Some well-known names may be missing, but unjustly neglected artists have been added to the list. A highlight is Matej Krén's Passage, a dizzy work created with stacks of books reflected in many mirrors.

Gregor uses the overarching theme of "realism" as a metaphor, since, he says, "our art is often mythical". By adding the word "reality", he is attempting to identify how much objectivity there is in realism, as well as the closeness of reality to other, more avant-garde styles, such as conceptual art.

originates, as a socio-political context. Reality in conceptual art is often the initiator of an activity, not a scenery or motif as is in the case of display genres."

To the young curator, Slovak realism of the 20th century is an "impressive structure tacking between idealization, historical perfidy and parallel truth", which requires an understanding of the development of history in our territory.

"Realism, as an artistic movement, is dominant not only in the last century but also the century before. I am interested in its poignancy, not only from its visual display but also the way it reflects on other social issues."

To understand his perspective, one has to keep in mind that art is more than just the sum of continually appearing works. Gregor's thematic approach is aimed to raise questions and provoke discussion on the 20th century art and the effects it is still having on us today.