IN A SURPRISE statement made October 5, Slovakia's Labour Minister Ľudovít Kaník announced his intention to resign.
Kaník, nominated to the post by Prime Minister Mikuláš Dzurinda's party, the Slovak Democratic and Christian Union (SDKÚ), gave impropriety as the reason behind his decision. 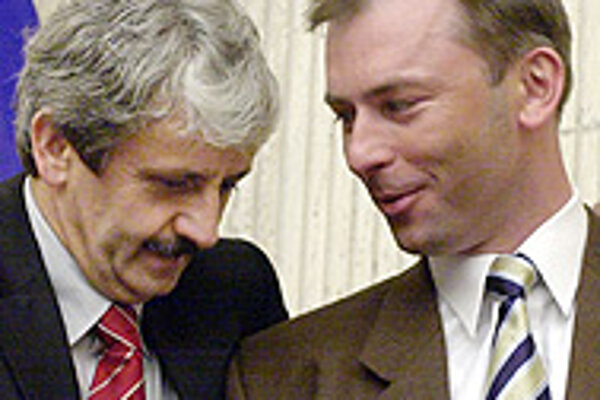 Kaník, nominated to the post by Prime Minister Mikuláš Dzurinda's party, the Slovak Democratic and Christian Union (SDKÚ), gave impropriety as the reason behind his decision. Apparently, the labour minister and a member of his family both applied for European Union structural funds.

Kaník is the fifth minister of the Dzurinda administration to leave a ministerial post since the national elections in autumn 2002. The minister is expected to hand in his resignation after a conference on pension reforms scheduled on October 12.

In a statement sent to The Slovak Spectator, Kaník said that "following in-depth consideration" he decided to hand in his resignation to President Ivan Gašparovič.

PM Dzurinda, who consulted with Kaník ahead of the public announcement, said that he agreed with the minister's decision.

"I welcome the abdication. Minister Kaník made a mistake and is willing to face the consequences," the PM said following a cabinet meeting on October 5.

Dzurinda noted, however, that he was sorry to see Kaník go because he has "done a lot of good work" in the labour and social affairs sector, having prepared three of the current cabinet's major reforms - the social systems, pension and the labour market reforms.

The prime minister would not speculate on Kaník's potential replacements. According to unofficial information, the current deputy labour minister, Miroslav Beblavý, or the deputy finance minister, Vladimír Tvaroška, are candidates.

For his part, Kaník plans to stay active in politics. He is the head of the non-parliamentary party, the Democratic Party (DS).

"I believe that I will best serve the cabinet's reform policy, and especially the social and pension reforms that the ministry has prepared and implements today, by my voluntary departure. In politics I will continue to be active in what I consider equally important work, particularly ahead of the elections, the integration of the right-wing powers in Slovakia," Kaník said.

The impropriety arose over a deal with Kaník's company, Kaník a spol. According to the Pravda daily, Kaník applied to receive Sk22 million (€570,000) on behalf of his firm from the state tourism agency in order to reconstruct a hotel. The money originates from EU structural funds.

Kaník admitted that both he and his family had made mistakes by applying for non-recurring contributions from the EU.

"We did not receive any money," he said.

"However, the reality is that we should have realized that the opposition would turn this into a political weapon," said Kaník. The soon-to-be former minister hopes that his resignation will help the cabinet maintain a strong political support going into the upcoming elections.

"I hope my voluntary departure will calm down the current tensions and that the Mikuláš Dzurinda cabinet will get the chance to fulfil the cabinet programme in the regular election term," he said.

Kaník was arguably one of the most criticized cabinet ministers. He faced no-confidence votes in parliament twice while in office.

The opposition initiated the first vote in December last year because of what they argued was a mishandled pension reform.

Two months later the opposition Smer party again tried to dismiss Kaník. Information surfaced that a firm in which Kaník was a co-owner had asked an insurance company to pardon it for late charges from unpaid premiums. Kaník also faced severe criticism because he did not pay his dues to social insurer Sociálna poisťovňa when he was a private businessman.

The SDKÚ, which has a right to nominate their candidates to the Labour Ministry, has not decided on a replacement. The SDKÚ's top board was expected to discuss the nomination on October 7.

Political analyst Grigorij Mesežnikov, the head of the Institute for Public Affairs, told The Slovak Spectator that Kaník's decision reflects a strategic move.

"Kaník is perceived as a person who is responsible for the consequences of some of the cabinet's unpopular reforms. By stepping down the SDKÚ and Kaník avoid the possibility of an eventual proposal for his recall in parliament," he said.

On the political level, Mesežnikov thinks that Kaník wants to strengthen his position and influence in the DS party and possibly even work towards merging DS with the SDKÚ.