PRESIDENT Ivan Gašparovič announced on October 4 that Jirko Malchárek would become Slovakia's new economy minister. Malchárek takes over from Finance Minister Ivan Mikloš, who has been acting as temporary economy minister since August 24, the date that Gašparovič dismissed Pavol Rusko from the post. 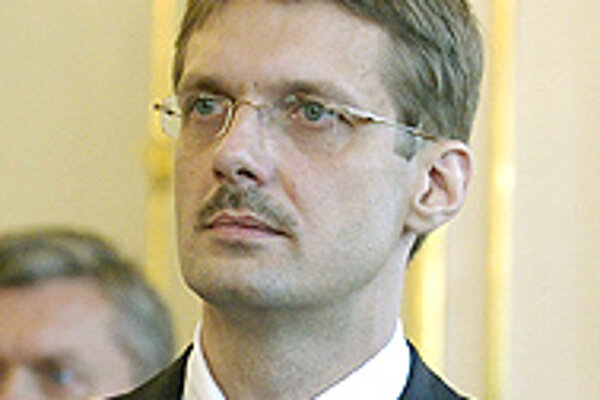 Font size:A-|A+0
PRESIDENT Ivan Gašparovič announced on October 4 that Jirko Malchárek would become Slovakia's new economy minister. Malchárek takes over from Finance Minister Ivan Mikloš, who has been acting as temporary economy minister since August 24, the date that Gašparovič dismissed Pavol Rusko from the post.

Prime Minister Mikuláš Dzurinda nominated Malchárek on September 12. After waiting nearly three weeks, Gašparovič finally decided to appoint Malchárek to the post. The president's decision came shortly on the heels of a personal request by Mikloš.

"The Economy Ministry needs a full-time minister. There are too many problems and challenges in the ministry, including those left behind by the former minister [Rusko]," Mikloš said on October 3.

Arguing that it was hard to tackle two ministries at once, especially at a time when he was working hard to prepare next year's state budget, Mikloš asked the president to accelerate Malchárek's appointment.

"I will name Malchárek [as economy minister] as the PM gave me his name but the responsibility is on the one who proposed him," Gašparovič told the SITA news agency.

At the appointment ceremony, Malchárek told the media that he intended to complete the ongoing privatization of state property transparently and advantageously. His other goals include improving the business environment; supporting the influx of foreign direct investments, especially into regions suffering high unemployment; and developing tourism and small- and medium-sized businesses in Slovakia using EU funds.

In his welcome speech, president Gašparovič echoed his doubts over Malchárek's nomination.

"I keep my fingers crossed for you so that those who sent you to this post and us, the other people in Slovakia, can say that no mistake was made," said the President.

Malchárek would not say who would comprise his closest team at the ministry, only that he would cooperate closely with Mikloš.

Malchárek entered national politics in 1998 as a member of now defunct Party of Civic Understanding, which was founded by Slovakia's former president, Rudolf Schuster. Ahead of the 2002 national elections Malchárek joined Rusko's liberal New Citizen's Alliance (ANO) and worked as one of his closest peers until Rusko was embroiled in an alleged conflicts of interest scandal.

Malchárek belongs to the splinter group of ANO members led by ANO vice-chairman, Ľubomír Lintner, who thought Rusko should voluntarily leave his ministerial post after the scandal was brought to light. Lintner and his loyalists were later expelled from the ANO.

When the prime minister announced the nomination of Malchárek, the opposition parties immediately voiced doubts about the MP's qualifications.

Now that Malchárek has been appointed, opposition parties have said that they will scrutinize his every move and will not hesitate to try to oust him before the customary 100-day grace period is up if necessary.

According to Tibor Cabaj, the head of the opposition Movement for a Democratic Slovakia (HZDS) caucus, Malchárek is a poor choice for economy minister.

"Every day that Malchárek serves as a minister, he will cause major damage to Slovakia," Cabaj told journalists at a press conference October 4.

Cabaj believes that Malchárek's appointment is the result of Lintner deciding to support the minority government after Rusko and his ANO withdrew to the opposition.

The ANO party has no plans to initiate Malchárek's removal as economy minister as an act of revenge. "We take his appointment as fact. We do not think that we should evaluate his qualifications for the job. Time will prove whether the selection was good," said Magda Krasulová, the ANO spokeswoman.

Krasulová refused to speculate on how the ANO would react if another opposition group initiated Malchárek's dismissal.

"In any case, we think that the reason for removing Malchárek should not be the fact that he is Malchárek. There have to be reasons for his possible recall and therefore he needs time to show how capable he is as economy minister," she told The Slovak Spectator on October 4.

In reaction to the opposition's rejection of him as a candidate, Malchárek said, "If the opposition already knows that I am a bad minister, it is clear that they do not care about how the ministry is managed but only about their political goals."

JIRKO Malchárek was born in the Czech Republic on June 28, 1966. After graduating from the Slovak Technical University in Bratislava, he worked for the city's public transportation company DPMB before finding new employment at the Office of the Governmental Plenipotentiary for the Automotive Industry. Until 1995, Malchárek worked as a private businessman in the area of leasing.

Malchárek is renowned for his passion for car racing. An honorary chairman of the F1 Slovensko Club, he has represented Slovakia in automobile sports for 11 years.