VERSATILE instrumentalists, guitarist Andrej Šeban and violinist Stano Palúch, plugged into an orchestra a few days before the flamboyant Bratislava Music Festival closed to cook up the premiere of Slovak composer Vladimír Godár's The Little Suite for Little David, a work that was especially written for the festival and them. 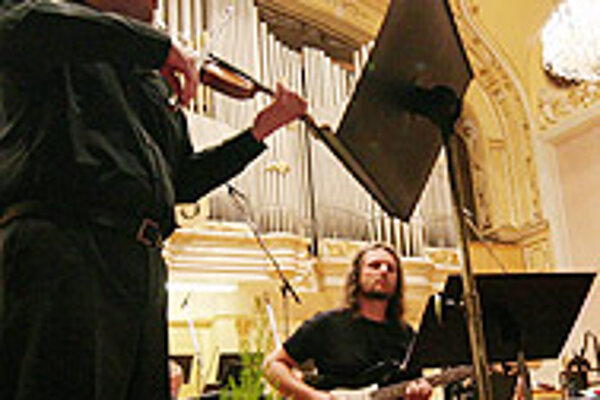 Font size:A-|A+0
VERSATILE instrumentalists, guitarist Andrej Šeban and violinist Stano Palúch, plugged into an orchestra a few days before the flamboyant Bratislava Music Festival closed to cook up the premiere of Slovak composer Vladimír Godár's The Little Suite for Little David, a work that was especially written for the festival and them. The Slovak Sinfonietta of Žilina accompanied these two extraordinary personalities of the Slovak music scene and Peter Breiner conducted.

Godár wrote the suite for his five-year-old grandson living in the American city of Boston. "He shows a great interest in music. It occurred to me that this work could embody aspects of old Europe, with its manifold past and varied regions," explained Godár, who mixed seasonings of baroque, folk and rock into it.

This "children's" composition flowed from genre to genre with ease, uniting this unconventional ensemble and allowing it to exhibit its virtuosity for improvisation. The composition culminated with the dynamic, rhythmical Goral Variations, which captured Breiner's senses and inspired him to dance along as he conducted. His agility was further revealed when he joined the musicians on cembalo.

Wednesday's concert was like a refreshment within the 41st Bratislava Music Festival, which closed on October 7. During its two-week run, the event offered several delicacies delivered by established and rising stars.

For example, world-famous opera diva Edita Gruberova opened the festival in a concert version of Gaetano Donizetti's opera Roberto Devereux. A native of Bratislava's Rača district who lives in Austria, Gruberova created a dazzling start for the festival.

The other introductory concerts grandly commemorated the 60th anniversary of the end of World War II with Britten's War Requiem, Prokofiev's War and Piece, and Beethoven's Eroica symphony. The Russian Symphonic Orchestra played Prokofiev's work, while the two other works were masterfully performed by Slovak orchestral ensembles. The spontaneously entertaining and highly musical King's Singers from Great Britain also livened things up.

Some of the most notable stars to stun the festival were Hungarian pianist András Schiff and two Russian violin virtuosi, Vadim Repin and Vladimir Spivakov.

At just 17 years old, Vadim was the youngest winner of the world's most-watched and most-demanding violin contest, Concours Reine Elisabeth. The Slovak audience absorbed his genius during a recital in which Repin played on a 1708 Stradivarius and was accompanied by pianist Itamar Golan.

This year's festival's prize for the best new talent stayed within domestic borders as Slovak violinist Dalibor Karvay stunned the international jury with his rendition of Tchaikovsky's Concert for Violin and Orchestra in D Major. He competed with 21 young performers from 12 countries.

Among the six foreign orchestras that performed, the Mexico City Philharmonic Orchestra, with its Spanish repertoire, brought the appetizing scent of exotica.

The Bretonian Symphonic Orchestra, a young French ensemble, filled the evening with works by Parisian natives Georges Bizet and Camille Saint-Saens. Under the baton of Lawrence Foster, who is of Romanian origin, the orchestra delivered an evenly cultivated sound that provided great support to the light-hearted and brilliant piano playing by leading American talent Tzimon Barto.

Slovak music critics heaped much praise onto the London Royal Philharmonic Orchestra that perfectly mastered Schumann's "Rhenish" Symphony No. 3, Op. 97 and Borodin's technically demanding "Heroic" Symphony No. 2 in b Minor. The symphony's 60-year tradition provided a great contrast to this unconventional Wednesday evening in Slovakia.

The Bratislava Music Festival has proved it remains a magnet for many.