THE SOGA auction house in Bratislava regularly sells works by key Slovak as well as European artists. But on October 13 bidders can name their price for a more unusual species of collector's item - cows. 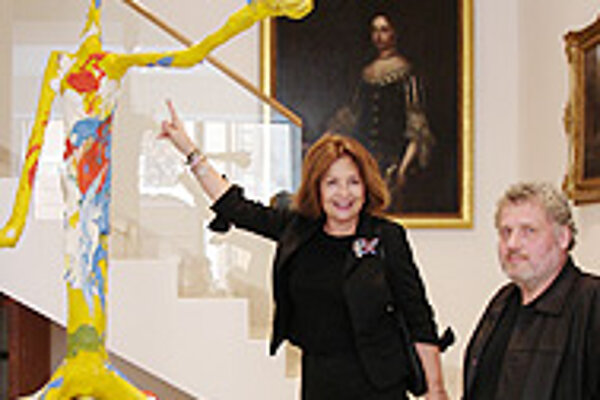 Font size:A-|A+0
THE SOGA auction house in Bratislava regularly sells works by key Slovak as well as European artists. But on October 13 bidders can name their price for a more unusual species of collector's item - cows.

The bovine artworks on sale are none other than a selection from the herd that has roamed Bratislava's streets since the summer as part of CowParade. The art/charity project is coming to an end and the cows are being sold to new owners. The money generated from the auction will go to support seriously disabled children.

This is by no means SOGA's first charity auction. It organizes them several times a year, cooperating with foundations such as the United Nations Children's Fund, UNICEF.

Managers from CowParade decided, together with SOGA, which cows should go in the sale. For this particular event, in which all the money made will be donated to children with special needs, commercial rather than artistic considerations were at the forefront. The 21 cows chosen for the auction are "branded" with the names of politicians and celebrities.

These include Speaker of Parliament Pavol Hrušovský, recently removed Economy Minister Pavol Rusko and media "magician" Fedor Flašík, who got together with Smer Deputy Chairwoman Monika Beňová to paint a cow. Professional artists helped to guide the inexpert hands of popular actresses Emília Vášáryová and Kamila Magálová, and opera singer Peter Dvorský. Though they at first feared the task, later they found joy in it.

"It wasn't easy to start but then I became amused by it. It was a great way to relax," said the opera maestro, Dvorský.

SOGA likes to know that people attending their auctions have sufficient finances to be realistic bidders, and the CowParade auction is no exception. Therefore only those invited can attend, but anyone seriously interested in helping disabled children may approach the auction house for an invitation.

"We are trying to ensure that the bidding takes place," said Nina Gažovičová from the SOGA auction house.

The Slovak CowParade has sparked various reactions and provoked a lot of discussion. Some people have objected to the value placed on the "art" on the cows' backs.

The creators were working according to the requirements as well as the financial limitations set by each cow's corporate sponsor - you could find a cow with simple zebra stripes or stamped with countries' international licence plates.

The simple designs also disclosed a lack of interest in sponsoring high quality art in Slovakia. The sponsors helped to bring only a fraction of the original designs to public view on the "canvas" of the plastic cows.

However, the charity side of the project has been welcomed.

"Potential investors are reacting positively to the project. They realize that CowParade was mainly for fun, but above all about charity," said Gažovičová, nonetheless cautious about predicting just how much money the auction will raise.

The auction is a chance for art lovers to enter an exclusive club of painted cow collectors, which includes Nelson Mandela, Queen Ranja of Jordan, ex-Beatle Ringo Starr and Elton John.