SLOVAKIA was given a unique chance to become visible on the world political stage and have a say on solutions to crises, including military interventions that the United Nations might support or condemn. 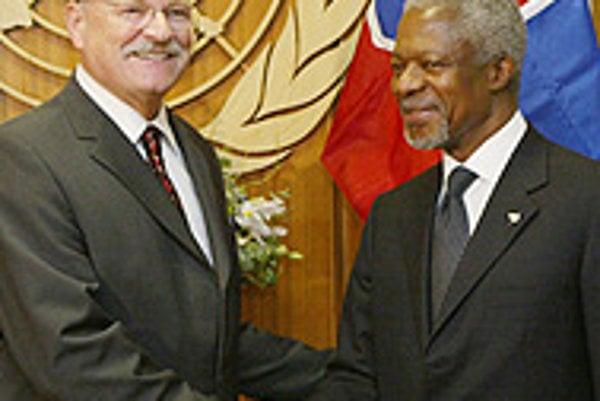 Font size:A-|A+0
SLOVAKIA was given a unique chance to become visible on the world political stage and have a say on solutions to crises, including military interventions that the United Nations might support or condemn.

As of January 2004, Slovakia will sit on the United Nations Security Council, replacing Romania in the position reserved for a non-permanent representative of Eastern European nations. Slovakia's term starts January 1, 2006 and lasts through December 31, 2007.

In votes cast on secret ballots in New York, 185 of the 191 countries votes yes to Slovakia's membership on the Security Council. Slovakia was elected along with Ghana, Qatar, Congo and Peru as non-permanent members.

The Security Council has five permanent members: they are Britain, China, France, Russia and USA. Other non-permanent members that started their two-year membership on January 1, 2005 are Argentina, Denmark, Greece, Japan and United Republic of Tanzania.

Slovakia is viewed as a country that can offer experience in building democratic institutions and contribute to the stability of the central European region, Slovak officials say.

The strong support of the world community pleasantly surprised Foreign Affairs Minister Eduard Kukan, who considers it an endorsement of the country's progress and achievements within the UN.

Kukan also credited Slovak diplomacy for managing to persuade the UN community that Slovakia was ready to take on the challenge of sitting on one of the most influential international bodies.

"Slovakia will be an active and constructive member of the UN Security Council. It will base its activities in the UN on democratic values and foreign policy priorities that our country follows as a member of the European Union and NATO," Kukan said.

According to Kukan, Slovakia will be intensively engaged in issues surrounding the future status of Kosovo and the development in the Balkans and Eastern Europe. Slovakia's neighbours all have had the experience of serving on the Security Council over the past 15 years.

Slovakia will have to pay more attention to the Middle East, Africa, Iran and North Korea than previously, as the Security Council is expected to face serious questions regarding these countries and regions.

The head of the international security programme of the Slovak Foreign Policy Association, Ivo Samson, said that temporary membership on the Security Council would increase Slovakia's visibility and allow it to play an important role in the United Nation's reform process.

"For two years Slovakia will be among those countries voting on whether or not the UN should support military action somewhere in the world, or whether military intervention is possible without the UN's blessing," Samson said in an interview with The Slovak Spectator.

According to Samson, Slovakia will have to actively monitor happenings all around the world and it has to learn to prepare and compile precise and exact analyses.

"It means that within two years Slovakia will acquire the skills of an important world player," Samson added.

According to Samson, it will be particularly challenging for Slovakia to make decisions pertaining to issues where the country will have to choose between its loyalty towards the European Council and its ties with the United States.

The foreign affairs depart-ment is expected to submit a document on Slovakia's priorities on the council.

Slovak President Ivan Gašparovič said that it is another of the great international successes that Slovakia has experienced since it became an independent republic in 1993. As a member of the council, Slovakia will attract worldwide attention, the president said.

Gašparovič said that being on the council is beneficial to Slovakia and its citizens because Slovak politicians will be at the source of the solutions for the world's security problems.

The president is confident that Slovakia is prepared for the task both economically and in terms of human capital.

"The preparation has also been sufficient as far as experience and technical qualifications are concerned. We have an agreement on consultations with those countries that have already been non-permanent and permanent members of the Security Council. I think that Slovakia is prepared and it is also being viewed in this way by others," the president told the news wire TASR.

When asked if Slovakia would favour the European Union or its long-term ally the United States, President Gašparovič said that "we will lean towards what is necessary to secure peace in the world."

Slovakia's election to the council is not a surprise. The Slovak Ambassador to the UN, Peter Burian, gained assurances from 172 countries out of the 191 members of the UN General Assembly long before the vote that they would vote in favour of Slovakia's temporary member-ship.

Since 1993, Slovakia has been involved in 28 peacekeeping missions.

Slovakia's ambitions to get elected to the Security Council failed in 1999 when Ukraine was elected instead. Then Bulgaria was elected for the 2002-2003 term. For the period of 2004-2005, Slovakia did not run for the post. In 2005, Slovakia's counter-candidate, Lithuania, withdrew its candidacy for the benefit of Slovakia.

"We tried to make it into this prestigious club in 1999 and collected only 13 votes less than Ukraine. But we learned a lot from this diplomatic fight and used our experiences in this current campaign," state secretary of the Foreign Affairs Ministry, Magda Vášáryová, wrote in an editorial for the daily SME.