WHILE Slovakia's left-wing parties concentrate their powers, primarily under the auspices of the largest opposition party, Smer, the right-wing parties remain isolated with little or no plans for unification.
According to analyst Martin Marušiak with the Slovak Academy of Sciences, however, a gradual unification of the right will be inevitable. 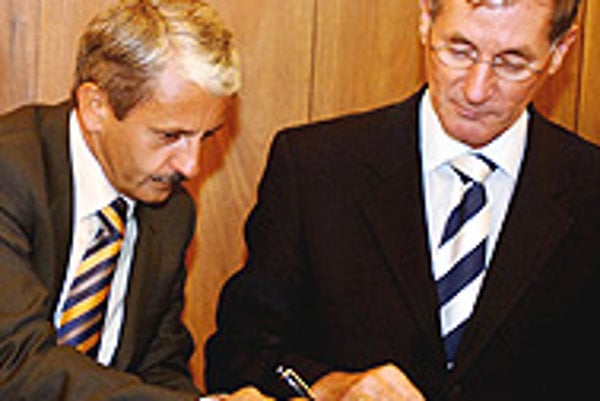 Font size:A-|A+0
WHILE Slovakia's left-wing parties concentrate their powers, primarily under the auspices of the largest opposition party, Smer, the right-wing parties remain isolated with little or no plans for unification.

According to analyst Martin Marušiak with the Slovak Academy of Sciences, however, a gradual unification of the right will be inevitable.

"With nearly eight years of mostly right-wing parties dominating the Slovak cabinet, a certain weakening can be expected. Many right-wing parties are destabilized, including the liberal New Citizen's Alliance (ANO)," Marušiak told The Slovak Spectator. The analyst even suggested that the Slovak Democratic and Christian Union (SDKÚ) could come unglued with the eventual departure of Prime Minister Mikuláš Dzurinda from politics.

The tiny non-parliamentary Democratic Party (DS) made the first move towards right-wing unification when, on October 6, its top board voted in favour of merging with the SDKÚ.

The DS is led by departing Labour Minister Ľudovít Kaník. After the 2002 national elections, Kaník was nominated to the ministerial post by the SDKÚ for what is generally perceived as a gesture of thanks for encouraging DS voters to support the SDKÚ in the elections. Although Kaník supports the DS-SDKÚ merger, special congresses of both parties must approve it as well.

The DS stated that it sought a strong partnership with the SDKÚ but also resolved to keep its own statutes, programme and aims intact. Not all members of the DS are in favour of the merger, however.

DS First Deputy Chairman Branislav Hochel, among the opponents of the merger, said that the whole process was only starting. He indicated he would take a wait-and-see attitude.

On the other hand, SDKÚ MP Peter Miššík welcomed the DS plans for merging, noting that the merger would "contribute to the unification of the right-wing political powers in Slovakia".

While the SDKÚ welcomes the decision of the DS to merge with the ruling party, the recent statements of its right-wing ruling partner, the Christian Democratic Movement (KDH), do not thrill Prime Minister Mikuláš Dzurinda's party.

KDH leader Pavol Hrušovský said in a discussion show on news channel TA3 on October 9 that the KDH wanted to become the leader of the right wing in Slovakia.

Hrušovský said that the KDH had "the confidence and [a lot to] offer" to qualify for such a position.

However, SDKÚ Chairman Dzurinda told the state-run news agency TASR that if all three ruling parties, including the Hungarian Coalition Party (SMK), were interested in maintaining the continuity of the political programme in Slovakia, they should cooperate closely rather than claim leadership on the political scene.

"It should be our common vision that the SDKÚ, the SMK and KDH outweigh the [left-wing] Smer. Rather than speaking about leadership in the centre-right political spectrum, it would be much more useful to speak of political continuity. Not just speak of it, but also work on it as much as possible," said the prime minister.

"I will do everything so that the political weight of the centre-right alternative grows," he said.

Kaník of the DS agrees with Dzurinda, stressing that the strength of the ring-wing, not who will lead it, was the important issue.

"Those who have an ambition to be the man in power [to unify the right-wing parties] should offer a clear stance to the citizens as to what is the most dangerous thing for Slovakia: the left-wing, Smer and the Communists," said Kaník.

According to analyst Marušiak, however, voters will base their ultimate decision on who will become the leader, or on which will become the dominant political power among Slovakia's right-wing parties.

He admitted that the KDH has proven that it was able to "bring ideological impulses to the table". At the same time, the KDH is a party that has historical continuity. Founded in 1990, the KDH has been a stable political force in Slovak top politics with a consistent programme and stable and accountable party structures, said Marušiak.

"However, it is up to Slovak voters whether they will be willing to accept the party's strong Christian and conservative nature," he said.