IF you want to find the phone number of a childhood friend or a business colleague in Slovakia, you must flip through three different phone directories. 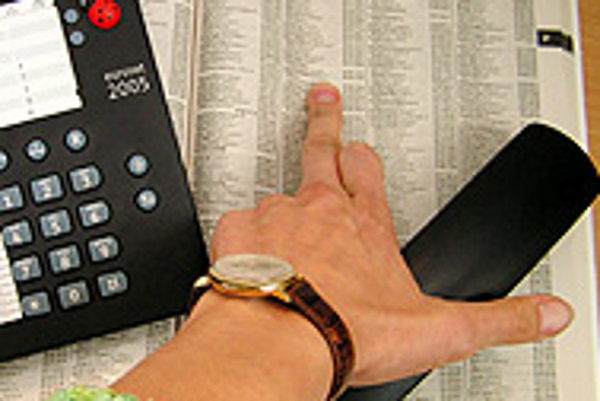 Font size:A-|A+0
IF you want to find the phone number of a childhood friend or a business colleague in Slovakia, you must flip through three different phone directories.

Slovak Telecom's fixed-line directory is one of them. Two mobile phone operators, Orange Slovensko and T-Mobile Slovensko, issue the other two. There could be some overlap: the databases of Slovak Telecom and T-Mobile are partially connected, since both companies have the same main shareholder, Deutsche Telekom.

The European Commission wants EU-member states to have one universal phone directory for all phone numbers, including fixed lines and mobile phones. So far, unlike other nations, Slovakia lacks a universal directory.

In July of this year, the EC sent a warning letter to Slovakia, criticizing it for failing to properly implement European Union rules on electronic communications.

The belated issue of a universal phone directory is caused by the fact that Slovakia has not yet selected a company to provide universal telecommunications services (See article, page 8).

"A company selected by the Telecommunications Office (TÚ) to provide universal services will result in the creation of a universal phone directory," Roman Vavro, TÚ spokesman, told The Slovak Spectator.

The TÚ is expected to make a decision by the end of 2005 on who will provide a universal service, which means the directory will not appear before this date. Two companies, Slovak Telecom and Orange Slovensko, have expressed interest in providing universal telecommunications services.

Radoslav Bielka, spokesman for Slovak Telecom, sees one unsolved problem. "We still have to work out the mutual exchange of data with mobile phone operators," Bielka told the Spectator.

Although Slovak customers are used to getting Slovak Telecom phone directories and information from mobile phone operators' databases for free, it is likely that customers will pay for services connected to a new, universal phone directory.

"The law says that universal services include a minimal range of services for an affordable price, which does not guarantee that a universal phone directory will be free," Vavro explained.

Apart from Slovakia, seven other EU-member states got a similar warning letter, including the Czech Republic. The first warning may be followed by a second if Slovakia does not publish a directory within two months. Ultimately, the EC could sue Slovakia at the European Court of Justice.

"The EU rules opening up national telecommunication markets must be fully and correctly implemented if European consumers and business users are to get the full benefits of competitive electronic communications services such as high-speed Internet connections and affordable mobile communications", commented Information Society and Media Commissioner Viviane Reding. "Our aim is to get the job done and to complete the internal market in this key sector of the economy as soon as possible".

EU electronic communications rules have been on the books since 2002, stimulating competition, innovation and investment in telecommunications and data services, the SITA news agency wrote.