The gift that forms a bridge to peace

"I'VE been living by the Ljubovidza River since I was born and I didn't believe the day would come when I would see a bridge built here," said 84-year old Rosa Radojcic from the village of Orovicska Planina in the northern part of Serbia. Then she rushed to help to serve the roasted pig that the villagers had prepared for the team of Slovak experts that would erect the long-desired bridge for the locals. 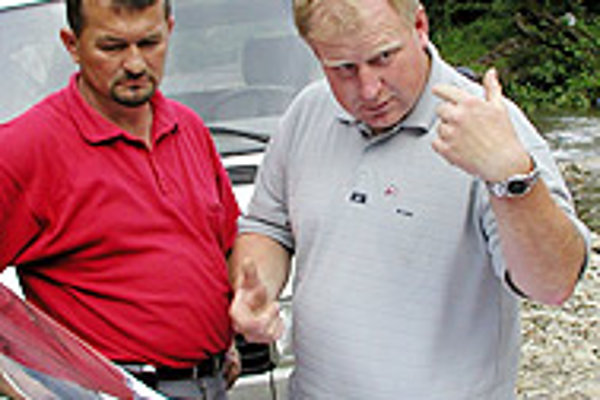 Font size:A-|A+0
"I'VE been living by the Ljubovidza River since I was born and I didn't believe the day would come when I would see a bridge built here," said 84-year old Rosa Radojcic from the village of Orovicska Planina in the northern part of Serbia. Then she rushed to help to serve the roasted pig that the villagers had prepared for the team of Slovak experts that would erect the long-desired bridge for the locals.

In fall, the water coursing between the Ljubovidza's riverbanks barely reaches one's knees. But every spring, during the thaw, the water raises two or three metres, cutting off about 2,500 villagers from the rest of the world. According to Vidoje Jovanovic, the district head for the Ljubovija region, it is nearly impossible to penetrate the Ljubovidza River in springtime, virtually isolating dozens of the mountain settlements near the Serbian-Bosnian border. Thanks to Slovakia, however, the region's seasonal seclusion is coming to a close.

Few today will remember that in the midst of World War II on November 9, 1943 in Washington DC, 44 signatory states created the United Nations Relief and Rehabilitation Administration. The goal of the organization, known as UNRRA, was to provide financial aid to European countries after WWII and help refugees to return home. More than half of the UNRRA budget, distributed until 1947, came from the USA. The former Czechoslovakia received more than $270 million (at the time, about 13.5 billion Czechoslovak crowns) in the form of food supplies, medicine and raw materials - including a 152-metre-long bridge construction known as the Bailey Bridge.

After the Communists took over in 1948, they concealed information about the UNRRA assistance. This is how it happened that the bridge constructions ended up in the State Material Reserves for more than 60 years - and why the Bailey Bridge will end up standing in Serbia.

"Before being admitted to the Organization of Economic Cooperation and Development and the European Union, Slovakia had been receiving developmental aid. After being admitted to the 'club' of economically developed countries, we have taken over an obligation to become a donor country, and are helping countries that are in more urgent need than ourselves," says Katarína Vajdová. Vajdová works as the director for the Foundation for Supporting Civil Activities, which, after winning a tender, now administers the Bratislava-Belgrade develop-mental fund.

Vajdová explains that the Slovak government and the Foreign Affairs Ministry decided that of the total of Sk160 million (€4.12 million) intended for developmental aid, the majority of the money - Sk60 million annually (€1.55 million) - will go to Serbia and Montenegro.

Currently there are 38 developmental aid projects implemented in Serbia and Montenegro. Some of the successful projects include the purchase of 168 typewriters for the blind in Serbia and the replacement of an old boiler at an elementary school in Bacsky Petrovec, in which a Slovak minority lives.

"We have agreed with the governmental Serbian construction agency that the Bailey Bridge will be divided into five separate bridges. It was necessary to compare the regional candidates for the bridges and select the right places to erect the bridges. Based on expert opinions, the districts of Ljubovija, Smederevska Palanka, Ub, Negotin and Dolejvac were the most suitable," says Vajdová.

Vajdová's agency sought an expert at bridge building in rural locations and capable of executing the project on time and on budget. "It is great that last year I met [bridge engineer] Oto Beňo. Over the past 10 years he has built 15 similar bridges in the Balkans while serving as a peacekeeper," the director said. Beňo has also built several bridges in Slovakia.

The fact that Beňo had built bridges first as a peacekeeper in Croatia and then later in Kosovo, and that now he is bridging rivers in Serbia strongly symbolizes the peace process in the Balkans. However the story embeds several other interesting parallels.

Several former participants of peacekeeping missions can trace their roots back to the UNRRA programme. The vice president of UN Veterans of Slovakia, a civil association that has become the soul of the bridge-building project in the Balkans, is Dušan Sčevík. During WWII, Sčevík's father was deployed in France. From 1944 to 1946 he worked for UNRRA. Thus with the father the circle of the story was opened, and with the son, it is closed.

By the looks of it, Orovicska Planina by Ljubovidza River reminds us of a Slovak village from 20 years ago. The narrow, rough road leading up to it looks even more archaic. This regional area in Serbia has paid a high price for the policies of Slobodan Milosevic and it needs a helping hand to walk out from its isolation.

While the region's five bridges themselves will cost Sk1.2 million (€30,000) to build, the Slovak government has allocated Sk6 million (€160,000) for their construction plus the renewal of infrastructure, explained Zdeno Cho from upport of Civil Activities. He added that the Serbs themselves would build the access roads and bridge pillars, costing them roughly Sk18 million (€470,000). Canada will also contribute to the project.

Near to a fjord of the Ljubovidza River, Oto Beno, Vidoje Jovanovic, Zdeno Cho and several engineers pour over construction plans. Dusan Radojcic opens a bottle of homemade Rajika (type of Serbian alcohol) while the villagers prepare the pig roast in the background. Everyone is eager to celebrate the new bridge. Before the thaw comes in spring, the locals will no longer be cut off from the world, thanks to help from the Slovaks, Canadians, the Americans and the Serbs themselves.