Live at Tehelné Pole: The match you didn't see on television

IT'S FOOTBALL night in Slovakia, October 12, and Bratislava's Hysteria Pub is full of warmly dressed fans sinking a last few pints before heading down the street to the Tehelné Pole stadium to watch their team play Russia. 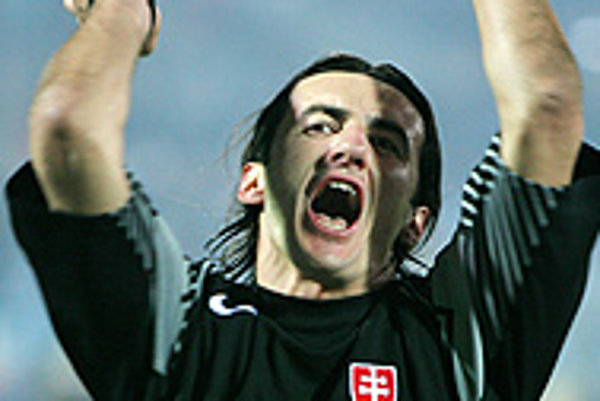 Font size:A-|A+0
IT'S FOOTBALL night in Slovakia, October 12, and Bratislava's Hysteria Pub is full of warmly dressed fans sinking a last few pints before heading down the street to the Tehelné Pole stadium to watch their team play Russia. Everyone seems on edge, checking watches and signaling for the waitress, probably because they've all experienced the crush of trying to squeeze through the stadium's ancient turnstiles. At some gates you can wait up to an hour in a heaving, cursing crowd while stadium staff plod through their security checks.

Half an hour later, we're inside and sitting in our upper-deck seats. There was no crush this time, partly because we chose a less-frequented entrance, and partly because there aren't many people. As the game draws nearer, and thousands of seats remain empty before the most important football match in Slovakia's history, the poor attendance - just 22,317 in a stadium that holds almost 30,000 - is a dispiriting mystery. Where the hell is everyone?

It was a question the players also seemed to be asking themselves after the match. "I don't get it," said Slovak captain Miroslav Karhan. "[Champion's League entrant Artmedia] Petržalka managed it [a sell-out] against Inter Milan [on September 13], and I thought this match would be sold out too."

But as the anthems are played, the absence of fans is no longer noticed. The Russians, still using the old Soviet Union standard, receive a cold shower of whistles, while the Slovak anthem is belted out with spine-tingling enthusiasm by the assembled thousands, everyone standing and holding colored posters overhead that were issued before the match.

For the first few minutes after the opening whistle, my attention half on the crowd, I notice that the boys in blue have started well, and I applaud a threatening run down the wing by a fleet-footed player. But I seem to be the only one clapping and Slo-ven-skooooing, and I'm drawing quizzical looks from the people around me. Finally, my companion explains that the Slovaks are wearing white tonight. Ah. Right then.

And indeed, for Slovaks fans there isn't much to cheer about for the first 10 minutes, until Slovakia's front duo - Róbert Vittek and Szilard Németh - find each other in front of the Russian net. Nemeth's hard drive from about 10 meters out is saved luckily by the Russian goaltender, who takes it in the chest as he is moving across the goal mouth. The impact of that moment - and the sound of Németh's boot making contact can be heard around the stadium - is huge: The Russians seem shocked that Slovakia is actually attacking, while the fans are shaken out of their early lethargy and are brought into the game.

Russia comes back with a dangerous chance by their front pair of Karzakov and Arsavin, but Slovak keeper Kamil Čontofalský looks extremely confident, punching balls away from waiting Russian heads and scooping up dangerous crosses.

In the 19th minute another event electrifies the crowd - a red flare is thrown from the Russian fans' section onto the field, bringing a chorus of boos from the terraces and a delighted chant of "Ruské kurvy" from the bleachers where the skinheads stand. This, after all, is what they came for.

The Russians press for the next 15 minutes, but Slovakia's Ivan Hodúr gets away a bounding drive in the 32nd minute that the Russian keeper steers away from the post, followed by another blast in the 37th minute that goes narrowly over the net, while Robert Vittek snaps a shot in the 40th minute that the keeper pushes into the crowd. The 0-0 halftime draw feels more secure than it looks.

Slovakia opens well in the second half, with Németh, Hodúr and Vittek combining well. So well, in fact, that Hodúr gets his whole leg behind a shot near the Russian goal - and puts it right into Vittek's groin. Vittek goes down like a sack of potatoes, and the audience groans in sympathy, amid eddies of ribald laughter. Vittek is carried off on a stretcher, but draws a huge roar from the crowd when he hobbles back onto the field a few minutes later, greenish in pallor, and clenching his fist in defiance.

Then the Russian fans act up again, this time tossing a flare into the Slovak bleachers. The Slovaks pick it up and chuck it back, whereupon the Russians return the favor. "Ruské kurvy" again echoes around the stadium from the indefatigable skinheads.

The final 25 minutes seem to take forever. The Russians pick up the pace, conscious of the need to win to advance, and they seem forever to be wheeling and probing the Slovak defense. But in the 85th minute, Filip Hološko gets a clear breakaway, and bearing down on the keeper, pokes it wide past the far goalpost. For a minute some fans look as if they're going to cry, but then the knowledge that Slovakia is only a few minutes away from going through brings everyone to their feet again, chanting and clapping.

The final whistle is not so much a cause for celebration as the welcome end to several hours of great tension. The match has been fast, hard-fought and emotional; the result is fair and well deserved. The crowd disperses excitedly, many of them back to the same pubs and seats they left three hours earlier, to haggle over the plays and bask in the country's greatest football success yet.