ALONG with the firmly established Jazz Days, Bratislava is host to a festival with a different approach to jazz. Nu Jazz Dayz, which has just completed its fourth year, has proven that the popularity of fusing modern and classical jazz styles is on the rise. 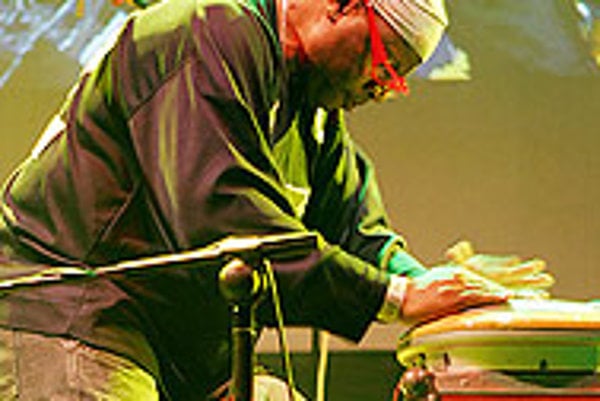 Font size:A-|A+0
ALONG with the firmly established Jazz Days, Bratislava is host to a festival with a different approach to jazz. Nu Jazz Dayz, which has just completed its fourth year, has proven that the popularity of fusing modern and classical jazz styles is on the rise.

The festival brought interesting experiments to the Babylon club's stage and attracted large audiences. World-renowned names came to mix their unique sounds, fusing jazz techniques into various musical genres and bridged by an electronic dance sound, between October 12 and 14.

Polish outfit Skalpel introduced their new album Konfusion, praised by critics, while mixing their own video-projection on three laptops. Dela Dap, a Slovak-Czech-Hungarian grouping whose nu jazz is imbued with their Roma temperament, unveiled a dynamic musical feast. The surrealist voice-blending mastery of Canadian Kid Koala on record decks elevated DJing to art, and the solo-project of American percussionist and singer Vinx electrified with the bright ricochet of drums and vocals.

It was not Vinx's first time at Nu Jazz Dayz. An acclaimed musician who has played with many great artists, including Sting, Lou Reed, BB King and Stevie Wonder, first came to the festival in 2002. He has also played several concerts in Slovakia besides the festival, all with his ever-changing Jungle Funk project into which great musicians are invited to create and mix sounds in an avant-garde environment.

"Slovaks seem to think I am Jungle Funk and only that," said the artist, who first came to play in Bratislava as part of Bratislava Jazz Days the year before Czechoslovakia split. "I want to show them there is more to Vinx than Jungle Funk."

The festival's organiser Miro Lánik, keeps inviting Vinx because he plays great music. One reason Vinx likes to return is the audience. "The American audience is very predictable, commercially programmed. It's not open like the audience in Bratislava, Budapest and Prague, that is hungry for a fresh taste."

Vinx also returns to Slovakia because of the local musicians. He likes it when a musician finds his voice, as there is not one common language or standard story in music. He found such examples in the Družina band, and singers Lucia Šoralová and Marián Greksa, as well as Czech singers Dan Bárta and Iva Bittová, and thinks he may cooperate with them in the future.

The Slovak Spectator caught up with Vinx before the Nu Jazz Dayz concert in Bratislava.

The Slovak Spectator (TSS): The Slovak audience has become familiar to you over the years through Jungle Funk.

Vinx (V): Jungle Funk is Vinx's project. There are three different versions of Jungle Funk. You only know the third one - featuring ex-Living Colour rhythm section musicians, drummer Will Calhoun and bass player Dough Wimbish. Jungle Funk is Vinx and other really great musicians that are acting like DJs, almost. Next one will be me and maybe Stewart Copeland, drummer from The Police. It's an always-changing project, different all the time.

TSS: Now, you come to perform as "One man, one voice, one drum". What is The Vinx?

V: It's pure. I am singing and adding voices, instruments. As people say, silence is a note; it's part of the music. Sometimes there's so much production that you can't hear the subtle magic in things. This is just the voice and the rhythm. It's more like a black-and-white film, where you have to imagine some of the colours. In some ways black-and-white film can have more a feeling of imagination because everything is not there, but it's suggested.

TSS: What do you get out of performing in clubs?

V: I love the intimacy. I'd rather play for 100 people that really want to listen instead of people that want to play pool or watch football. I enjoy listening audiences.

TSS: You are interested in initiating contacts with local musicians. Does it mean we might one day hear a Slovak influence in your music?

V: Exactly. But I'm interested in things that are unique, unique in a Slovak setting.

TSS: Družina incorporates traditional folk music into their world sound. Is that why you are interested?

V: I can hear how they're taking this traditional old Slovak music and morphing it, making it maybe more 'acceptable' through their arrangements.

My interests are those things that are often difficult to find. I know what a traditional song sounds like in Sweden or the Swiss mountains. But some places hide [this song], probably they don't appreciate it because they're too close to it. But I would like to hear that.

TSS: The world got to know you first as an athlete, though the time you were training for the Olympics in 1978 you also played with Taj Mahal. How does being a sportsman compare to making music?

V: As a champion athlete you have to be able to find motivation, trust yourself and release this 'passion' as a physical act. Our job, as athletes, is to find that inside strength. As an artist, which is more difficult, the process going on inside is the same, but instead of releasing it as a physical act I have to describe it, release it as art. Great athletes are artists.

TSS: When will we see you again?

V: I'll come when we have another Jungle Funk and when I am invited. It might even be with Slovak artists.