CORRUPTION in Slovakia is on the decline, according to a 2005 survey of attitudes in the expert and business community by the Transparency International NGO. 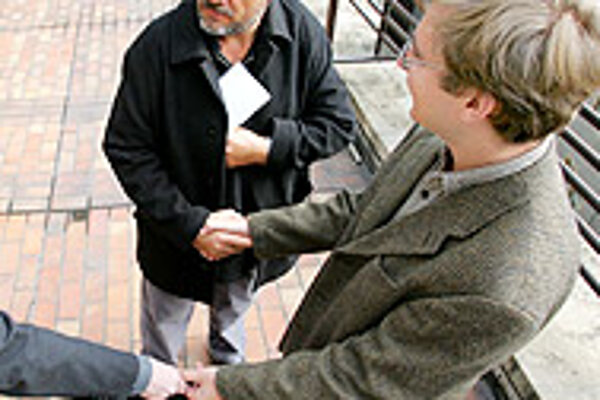 Font size:A-|A+0
CORRUPTION in Slovakia is on the decline, according to a 2005 survey of attitudes in the expert and business community by the Transparency International NGO.

Published in the form of a Corruption Perceptions Index (CPI), Transparency International's findings showed that Slovakia was perceived to be markedly less corrupt than at any time in the past five years.

Slovakia's 2005 CPI was 4.3 points on a 1-10 scale, with the higher the value, the less corrupt a country was believed to be. The grade put Slovakia in 47th position alongside the Czech Republic of the 159 states surveyed. It also represented an improvement of 0.3 points over last year, and a climb of 0.8 points since 2000.

At the bottom of the table were Bangladesh and Chad, which scored 1.7 points.

In its report on the new data, the NGO attributed Slovakia's improvement to the reforms the Mikuláš Dzurinda cabinet has launched since 2002, as well as to its anti-corruption measures, improved management of the courts, the establishment of institutions to fight organized crime and political wrongdoing such as the Special Court and Special Attorney's Office, and better access to information such as the publication of the business register on the Internet.

This is the eighth year Slovakia has been included in the survey. In its first year in 1998, the country received a CPI grade of 3.9 points.

While Slovakia's 2005 ranking put it alongside countries such as Greece and Namibia, Babitz said the rankings of surrounding states were more significant for understanding the meaning of Slovakia's grade.

Of all the "Visegrad Four" states (Slovakia, Poland, Hungary and the Czech Republic), Hungary performed the best, scoring 5.0 points for 40th place. Poland turned in the worst showing among the regional grouping, placing 70th.

While people may believe Slovakia is gradually becoming less corrupt, much work remains to be done, said Pavel Nechala of TIS. For one thing, he said, most of the tasks set in the cabinet's anti-corruption plan, approved in 2003, were to have been completed in 2003 and 2004.

"With a few exceptions, no goals were set for 2005 and 2006," said Nechala. The current cabinet's term in office is scheduled to end next year with September parliamentary elections.

Nechala added that many ministries had set themselves goals in their anti-corruption agendas that were "too easy".

"The strategy of the government in fighting corruption in the future is not clear."

According to Nechala, this criticism can also be applied to the cabinet's anti-corruption office.

"The office has failed in its task as a coordinator of anti-corruption measures, because the quality of the measures and the work that is done at the various ministries in this sphere differs widely," said Nechala.

Room for improvement exists not only in cabinet plans and ministry offices but also in the probity and accountability of Slovak politicians, according to TIS.

"None of the parties of the coalition have avoided suspicions of dubious activities," reads the TIS report. "One example of clientelism is the distribution of additional tax revenues from U.S. Steel [which the cabinet divided up among politically friendly municipalities - ed. note]."

According to Nechala, Dzurinda's ruling Slovak Democratic and Christian Union (SDKÚ) has also failed to clearly explain who took over the party's Sk22 million (€564,000) debt, and what was offered in return.

TIS also called for closer examination of the recent decisions of some opposition MPs to suddenly support the coalition and help the ruling parties resolve a serious parliamentary crisis in which they had lacked enough MPs even to open parliamentary debate. Other examples of suspected clientelism include the recent case of Agriculture Minister Zsolt Simon, whose firm Agrotrade applied for and received agricultural subsidies of Sk8 million (€205,000) in 2003. The commission that decided whether to award the subsidies had been appointed by Simon.

Simon refused to resign over the issue, and was backed up by his colleagues in the Hungarian Coalition Party (SMK). SMK Chairman Béla Bugár said no conflict of interest had been involved because all agricultural companies had been entitled to ask for funding.

However, Nechala said that TIS saw "many common features in this case and the case of former Labor Minister Ľudovít Kaník".

Kaník stepped down voluntarily after it was discovered that his family firm had applied for EU funding through a state tourism development agency. Kaník admitted that asking for the funding had been a mistake.

In cases such as that of Simon, Nechala said, the parliamentary conflict of interest committee should act and demand an explanation, and argued that its continued failure to do so was proof that it "remains dysfunctional".

Overall, however, TIS admits that many positive changes have taken place in Slovakia in its fight against corruption.

"Many systematic changes and reforms have taken place in Slovakia, and that was reflected in the [improved] CPI rating," said Nechala. "In future, however, it will be crucial that reforms and measures are implemented thoroughly in practice, including the conflict of interest law.

"It's vital that the rules apply to everyone, including politicians."