ALMOST 3,000 police officers and civilian employees of the Interior Ministry gathered on October 25 to protest in front of the cabinet office in Bratislava. 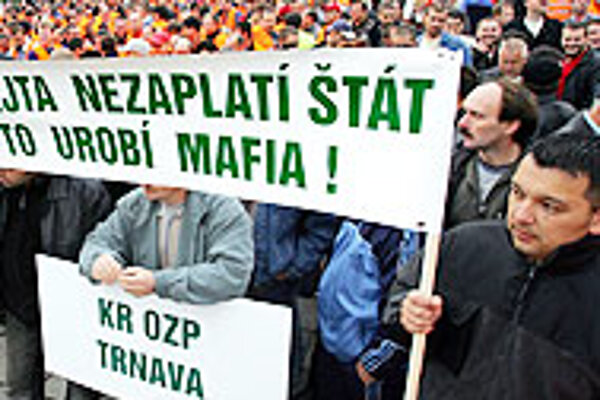 Font size:A-|A+0
ALMOST 3,000 police officers and civilian employees of the Interior Ministry gathered on October 25 to protest in front of the cabinet office in Bratislava.

The protesters were voicing their concerns about what they say are insufficient funds allocated to the police from the state budget. The police officers particularly stressed their disappointment with low salaries compared to professional soldiers, the SITA news agency reported.

Officers were also protesting against a revision that, if approved in parliament, would leave them without some social benefits.

At the rally, officers carried signs stating, "If policemen aren't paid by the state, the mafia will gladly step in" and "Savings on the police is a danger to the safety of citizens". The crowd reacted with noisy disapproval and whistling when the deputy chairman of the police trade union, Marian Magdoško, read a statement from Interior Ministry spokesperson Boris Ažaltovič saying that the police would receive a 13.2 percent salary increase next year.

Ažaltovič said there were no grounds for the protest and it was "damaging to the interests of police employees". Police labour union officials said that officers wages are insufficient. Police officers get a starting gross salary of Sk9,000 per month (€232), Miroslav Litva, the head of the police trade union said. In comparison, start up pay for a professional soldier is Sk15,380 (€396). One day after the rally, Interior Minister Palko demoted Litva to a regular officer.