"NOW I understand why hurricanes are given women's names," a visitor to Bratislava Jazz Days summed up the show delivered by Japanese pianist Hiromi and her band. 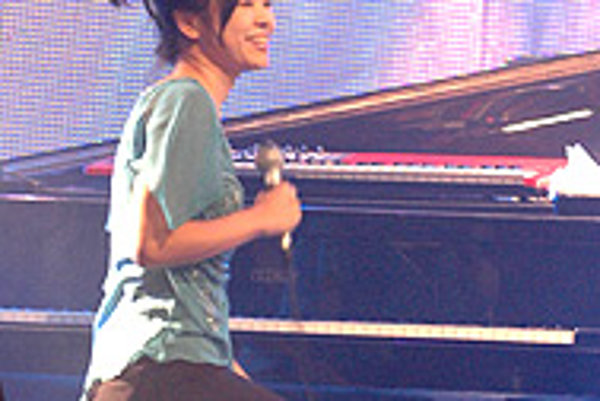 Font size:A-|A+0
"NOW I understand why hurricanes are given women's names," a visitor to Bratislava Jazz Days summed up the show delivered by Japanese pianist Hiromi and her band.

The exceptional, 26-year-old Hiromi Uehara, equally supported by Slovak drummer Martin Valihora and British bassist Tony Grey, brought the house down on the last day of the festival. The trio's impetuous, multi-genre musical mayhem won them standing ovations and the public did not stop calling for more even after two encores. The festival's head, Peter Lipa, had to calm the public down to let the festival continue.

The festival's last act, the 13-member Spanish Harlem Orchestra, delivered their hot salsa rythms, but it did little to overshadow Hiromi and her partners.

"I've heard them play before at other concerts, but the festival's atmosphere and the Bratislava audience made

the excitement greater," was Lipa's reaction to the Hiromi trio.

The organizer admitted that along with a perfectly tuned performance, interesting jazz improvisations over various musical genres, the band's success was also the credit of one of Slovakia's best drummers, Martin Valihora, who received the 2004 Music Fund Award for successfully representing the Slovak jazz scene abroad and at home. Thanks to him the festival heard the first Japanese musician in its history.

"Slovak people are very enthusiastic. I am happy to be here," Hiromi, who played several concerts recently in Slovakia, told The Slovak Spectator.

Hiromi, whose improvised musical mastery stems from a classical background, has developed her "voice". Her inspirations are boundless and her influences stretch from Frank Zappa to Igor Stravinsky. She includes a

classical influence and some straight jazz, rock and modern music to her eclectic compositions. With energy-loaded synthesizer/classical piano pieces, such as Return of the Kung Fu World Champion, she brings jazz to a young audience.

She mixes her taste with the rhythm and melody of drums and bass. The three musicians met at Boston's Berklee College of Music, where they immediately found they were on the same musical wavelength. They have been together for two years.

"Thanks to Hiromi I am advancing in all aspects of music: technical as well as spiritual. And we all take a great joy in performing together," said Valihora, who is currently living in New York City but regularly returns home to support the local club jazz scene.

Hiromi's joy from performing is evident in her broad smile and rhythmical shakes as she plays. She remains astonished how serious her band is when working on music. "They really go for it. They never compromise; they always bring maximum focus to my music. I always get so inspired."

Before she met Valihora, she largely thought of drums as a percussive instrument. "Martin can really sing with his drums," said Hiromi. "And my bass player, he's lyrical and at the same time very groovy. These two, they make the music boom."

The bassist, who often plays his instrument like a six-string guitar, also thinks Valihora is the most creative drummer he has ever played with. "Whatever we play one night, it might be very comfortable and the next night you might be looking for that particular moment but I can guarantee he will not play the same thing. It always forces me to react differently and change my thinking, which helps me grow and find different possibilities within the same structures. I never find that with another drummer."

Hiromi has released two CDs. The third one, and second with this trio, Spiral, is on the way. It will be released in January in America, followed by a tour that also takes in Europe. From now till the end of 2005 the band is on show in Japan.

"This concert was pretty much the start of promoting our latest CD," the bassist Grey said.