Wallace and Gromit survive this Curse

AS TRADITIONAL animation - that is, animation not totally made with computers - becomes increasingly rare, an artist like Nick Park is a godsend. This isn't to say that computer generated animation is inferior to its older counterparts; Pixar, in particular, with Monsters, Inc and The Incredibles, has made impressive, durable works of art. 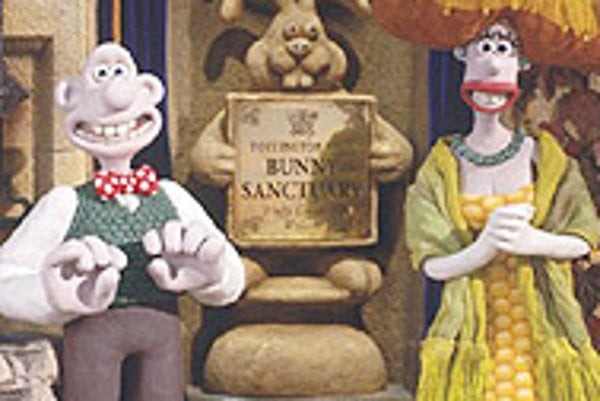 AS TRADITIONAL animation - that is, animation not totally made with computers - becomes increasingly rare, an artist like Nick Park is a godsend. This isn't to say that computer generated animation is inferior to its older counterparts; Pixar, in particular, with Monsters, Inc and The Incredibles, has made impressive, durable works of art. But computer images are not yet an adequate replacement for those made by the human hand. Nor should they be: Each medium has its own separate advantages.

Nick Park clearly knows this, though he does not totally eschew computer graphics. Instead, he uses them to enhance his painstakingly produced movies. Park's films take ages to create. Using stop-motion animation and clay, he must sculpt figures to cover a wide range of facial expressions, poses, and - in the case of his second full-length movie, Wallace and Gromit: The Curse of the Were-Rabbit - character transformations. Reportedly, the movie took five years to make, not an insignificant stretch for a picture that clocks in under 90 minutes.

But Park and co-director Steve Box jam those minutes with incredibly rich and subtle visuals. Like Park's feature debut, Chicken Run, and the three Wallace and Gromit shorts that preceded it, The Curse of the Were-Rabbit is a triumph of animation. Does it fully live up to the understandably high expectations of Wallace and Gromit's rabid fan base? Not entirely: The first three shorts were as clever and compact as they were beautiful.

The Curse of the Were-Rabbit doesn't lack cleverness, nor is it wasteful. Yet, it doesn't feel as complete and perfectly executed as its predecessors. Put simply, it's not a masterpiece. But it is a damn good time, and a strong reminder of what we had been missing over the 10 years since Wallace and Gromit last graced a movie screen.

In their latest adventure, Wallace (voice of Peter Sallis) and his trusted dog Gromit spend their days and nights protecting the gardens of West Wallaby from pesky rabbits. In the lead up to their town's annual vegetable festival (in which the townspeople compete to see who has the biggest produce), this job proves particularly important. But, when Wallace uses one of his latest inventions to try to suppress the rabbits' hunger for vegetables, things go horribly awry.

While Wallace is busy endearing himself to the wealthy Lady Tottington (Helena Bonham Carter) with his toothy charm and humane form of pest control, a far more formidable foe begins to terrorize West Wallaby's overflowing gardens. Ravaged vegetables and reports of a giant rabbit have the townspeople in hysterics, putting the competition in jeopardy. This forces Wallace and Gromit to save the day, or else lose the business and respect of their neighbours.

While trying to catch the beast - dubbed the "Were-Rabbit" (like werewolf) by the local priest - Gromit discovers that Wallace's experiment in rabbit mind control has produced a monster that is far too close for comfort. At the same time, Lady Tottington's obnoxious, gun-crazy suitor, Victor Quatermaine (Ralph Fiennes in fine, snooty form), sets out to slay the rabbit in an attempt to outdo Wallace.

Because Wallace is as riddled with mishaps as ever, Gromit must act quickly to save his beloved master and the vegetable competition. But Victor and his belligerent bulldog stand firmly in his way.

While adding layer upon layer of sight gags, Park and Box tell a cautionary tale about the dangers of tampering too much with nature (both animal and plant). The Curse of the Were-Rabbit is smart family entertainment with a conscience - a worthy addition to the Wallace and Gromit legacy.