WHAT a difference a few weeks can make.
When Bratislava football club Artmedia began its Champions League group round with a 0-1 home loss to Inter Milan on September 13, their opponents appeared thoroughly in control, even after having a man sent off. 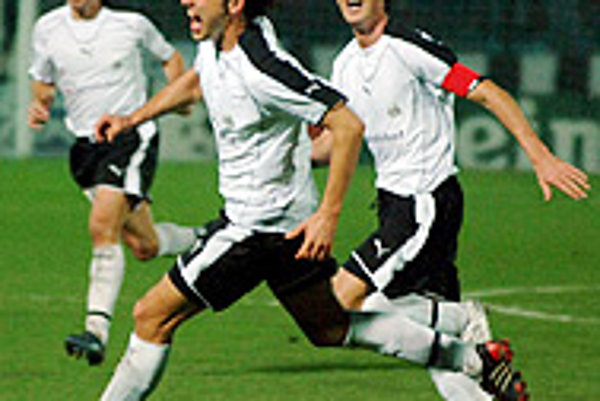 Font size:A-|A+0
WHAT a difference a few weeks can make.

When Bratislava football club Artmedia began its Champions League group round with a 0-1 home loss to Inter Milan on September 13, their opponents appeared thoroughly in control, even after having a man sent off.

Artmedia, on the other hand, slagged by the international media as "minnows" and (by the Scottish media) as a "pub team", not only looked as if it didn't belong on the same pitch - they looked certain to crash out of the group with six defeats in six matches, the same sorry result as recorded in 1997-98 by FC Košice, the only other Slovak team ever to qualify for the round.

But eight weeks later, the minnows are themselves preying on bigger fish.

Since the loss to Inter, Artmedia has notched a 3-2 comeback win away against Porto, a 0-0 draw in Glasgow against the Rangers, and on November 1, their confidence clearly soaring, another well-deserved draw, 2-2 against the Scottish side in Bratislava.

The morning editions of Scottish dailies contained no references to pub teams on November 2, but instead to an "endlessly intriguing" match with a Slovak side that "has the power to pull even".

"This was some brilliant football, and Artmedia contributed their share," said Dado Pršo, Glasgow's Croatian striker, who scored his team's first goal and assisted on their second by Steven Thompson. "They're very well organized, and they played a lot better at home than they did at Ibrox [stadium in Glasgow on October 20]."

Artmedia's autumn form may have quickly won the respect of its Group H opponents, but the football public - even the Slovak football public - clearly needs more time to adjust to the unlikely prowess of this tiniest of clubs.

At €1.3 million, as reported by Reuters, Artmedia's annual budget is less than the salaries of some individual players on the teams it has faced.

At 7,000 capacity, Artmedia's home stadium in the suburb of Petržalka is too small to host the team's Champions League matches, which are played across the Danube River in the 30,000 Tehelné pole facility.

At 106 years of age, the club has changed its name 13 times in its history, and most recently adopted the moniker of an ad agency controlled by its owner, Slovak media baron Ivan Kmotrík.

Lacking money, tradition and even a significant local fan base, Artmedia looks completely out of place in the lucrative Champions League - at least off the field.

In the buildup to the November 1 game, Scottish fans infested Bratislava, chanting and singing and camping out on public benches with cases of beer. They even spread a 100-square-metre banner dedicated to deceased Rangers player David Cooper on the capital's Hviezdoslavovo námestie in front of the national opera building, and had three fans carted off to jail for being drunk and disorderly.

Of Artmedia's supporters, however, not a peep was to be heard in the downtown core. Game day was also All Saints' Day, a national holiday in Slovakia, and most of the city's residents were visiting the gravesites of their dear departed.

The graveyard quiet continued in the stadium as well as the teams warmed up, apart from the hoots and choruses of the 2,500 Glasgow supporters in their corral, with Artmedia fans straggling in and ignoring the efforts of the MC to get them involved.

And when Dado Pršo deposited the ball behind Artmedia keeper Juraj Čobej in the second minute from a well-worked but innocent looking free kick, the rapture of the Scots was all that could be heard in the one-third empty stadium.

But some inspired play by the home side in response brought Artmedia's supporters out of their holiday trance, and when captain Balázs Borbély knifed home a loose ball from a corner in the seventh minute, he evened the teams in more than score. For the rest of the match, as Artmedia probed Glasgow's defence with dangerous passes and precise ball control, Tehelné pole echoed with gasps, groans and appreciative applause.

Artmedia dominated the first half, but Thompson's header in the 44th minute just before half time from another free kick against the flow of play sent the home side to the dressing room with a frustrating deficit.

However, a defensive mistake by the Rangers in the 59th minute led to a goal by Artmedia's man of the match, Ján Kozák, and despite some late Scottish pressure, the match ended in a draw that displeased no one but the Scottish media, who described Glasgow keeper Ron Wattereus as "the king of cock-ups", and derided a late off-target header by Peter Lovenkrands as having looked "easier to score than to miss".

Glasgow coach Alex McLeish, under intense pressure to get Rangers through the group, admitted to being disappointed because the team had scored two away goals but still hadn't won.

Not so his Slovak counterpart.

"I'm happy with the team's performance, it was great football," said Artmedia coach Vladimír Weiss after the match.

"This was our best Champion's League group match so far," said Kozák. "Twice we were down a goal, twice we came back. I think we showed our strength, and even though it's a pity we never got that third goal, we're satisfied with the draw."

Neither club had given its supporters reason for optimism since the last time they met, with Artmedia losing 0-1 to Ružomberok in the Slovak premier league (Weiss: "It was our worst performance of the season - we didn't even have a shot on goal"), while Glasgow suffered back-to-back draws with Livingston and Inverness in the Scottish premier league.

However, with Inter Milan defeating Porto 2-1 in the other Group H match played on November 1, all teams still have a chance to advance with two games remaining.

Artmedia faces Inter away and Porto at home.

"This draw really throws the group wide open, and may only be decided in the final game, which we play at home with Porto," said Weiss. "Thanks to us, the favorites aren't having it as easy as they thought."