BRATISLAVA'S Vogel Couture is the first fashion atelier in Slovakia to follow in the footsteps of fashion houses abroad. Vogel, like high fashion salons in Paris, has separate design and business departments, which means it can achieve its potential in both areas. Katarína Gallová and Roman Minárik founded it in 2001, but the Vogel name stretches back further. 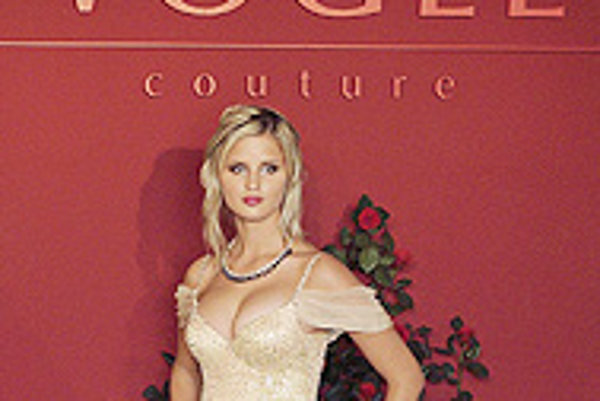 Font size:A-|A+0
BRATISLAVA'S Vogel Couture is the first fashion atelier in Slovakia to follow in the footsteps of fashion houses abroad. Vogel, like high fashion salons in Paris, has separate design and business departments, which means it can achieve its potential in both areas. Katarína Gallová and Roman Minárik founded it in 2001, but the Vogel name stretches back further.

In the times of the first Czechoslovak Republic (1918-1938), Minárik's great-grandfather was a fabled tailor in Trenčín. He could reputedly cut a perfect dress shape out of a piece of fabric using no marked outline. His daughter, Ms Vogel, also became a tailor. Her grandson decided to name the atelier after her and retie the family tradition broken by the Communist seizure of private properties.

"Like any other tradition that has been broken, it looks for new forms and ways of functioning. Vogel fashion atelier is building on a family tradition but in a new environment, addressing the present, a very demanding clientele busy at work and short on time," says Júlia Sabová, head of the Textile Department of the Academy of Fine Art and Design Bratislava, who cultivates new fashion-design talents.

Vogel functions solely on an original, high quality level with a fully attentive approach to its customers. To

achieve that, it separates business from creativity. It employs its own designer, who creates the firm's characteristic brand while paying close attention to customers' needs, and an administration that runs the business.

The atelier's designer, chosen by tender and who has been with the firm since its founding, Jana Kuzmová, is also one of Sabová's students. She is a rare example of a Slovak fashion design graduate who did not get lured away by opportunities abroad and whose talent found full footing at home.

"Finally someone understood that the work of a professional in this direction is necessary for good and prosperous results," says Sabová. "A positive attitude towards fashion, browsing through fashion magazines, an entrepreneurial spirit and sufficient brashness is not enough. Jana is a complex, artistically educated personality, who imprints a stamp of luxury and respectability for the atelier with her creativity and inventiveness."

According to Vogel's Minárik, Bratislava has many good and quality fashion salons. However, they do not divide business and creativity. The designer, often the founder of the house, is left to handle everything on his/her own, which hampers the professional work and approach to the customer.

"There are many inventive people in Slovakia, who can easily compete in design abroad and many also got established there. But it is as if it isn't yet [accepted] in Slovak culture to feel proud of our design here at home," says Minárik.

"It's a question of one or two years before they understand and begin to contribute to building this tradition at home."

To help stimulate the young with high standards of design and let them breathe the atmosphere of the real fashion business at home, Minárik founded the Ability Enterprise fund to support fashion as well as jewellery designers.

At their first fashion show, which took place four years after the atelier's founding, until the Vogel brand had matured, they also offered space to young graduates. Before Kuzmová's 31 models divulged Vogel's Magic of Women's Silhouette, the catwalk was occupied by models dressed in inventive designs by students of Bratislava's Academy of Fine Art and Design Bratislava.

"At school they develop fantasy, experiment with materials. Real life, though, is different," Minárik explains. "Some of our customers are very conservative and reject any fantasy in their designs. Only the right approach [of a designer] can teach them that Vogel is about original creativity."

The university's Sabová says she is very pleased that someone in Slovakia offered space to young designers, contributing to their education, talent and professionalism.

"It's not only about presenting young designers on the professional scene but mainly about educating prospective clientele to realize the quality of artistry in a piece of clothing and being able to accept new, progressive opinions about one's way of dressing and expressing one's personality.

"It's a pioneering step, which I hope will find more followers."