FIVE thousand people marched through the Slovak capital on November 9 to express public outrage against the fatal stabbing of Daniel Tupý five days earlier. The 21-year-old philosophy student from Žilina is believed to have been killed by a group of about 15 skinheads. 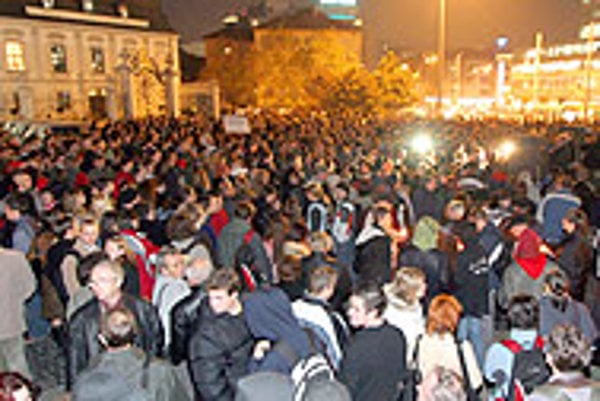 Font size:A-|A+0
FIVE thousand people marched through the Slovak capital on November 9 to express public outrage against the fatal stabbing of Daniel Tupý five days earlier. The 21-year-old philosophy student from Žilina is believed to have been killed by a group of about 15 skinheads.

Tupý, who wore long hair, was targeted and killed at Tyršovo nábrežie, a traditional outdoor venue for rock concerts on the right bank of the Danube River near Starý Most. He carried a guitar slung over his shoulder when the group attacked.

The skinheads struck six other people as well, police informed. Two suffered serious injuries and were rushed to a nearby hospital.

Mostly young people took part in the demonstration in Bratislava. Ahead of the early evening event, public buses were packed as demonstrators headed to Hodžovo square. From there, the crowd walked peacefully through the city centre with lit candles to Tyršovo nábrežie, where Tupý was stabbed seven times.

According to estimates, around 5,000 people attended the march in the country's capital. In Košice, around 200 people joined the protest by lighting candles. Demonstrators in Zvolen and Prešov also publicly mourned the victim and protested against the violence.

Coincidentally, November 9, the day the march took place, is the international day for the fight against fascism and anti-Semitism. It is the remembrance of the so-called Crystal Night of 1938, when Nazi Germany started its pogroms against the Jewish community ahead of the Second World War.

Tupý's murderer or band of murderers is still at large.

The student was attacked without apparent reason as he was on his way to band rehearsal.

Student organizations and Tupý's peers condemn the killing and are calling for a punishment commensurate with the crime.

Tupý's appearance - his long hair and guitar - seems to be the only reason why the skinheads might have chosen this young philosophy student as their victim.

The Nová Scéna theatre stage held a special performance of the musical "Hair" in Tupý's memory on November 7.

"He was in the wrong place at the wrong time. There is really no reason why he should have been killed at all," said Daniel Milo, the head of the People Against Racism.

"I am glad the media is giving this event major attention. But I want to note that this is just the culmination of years of violence and attacks. According to our estimates, seven people died in recent years as a result of similar attacks. Daniel was just the first in the line of victims who was not a Roma," the NGO head told the press.

Milo emphasized that it is high time that people realize that the skinhead movement is not a matter that only affects marginalized members of society.

"They are well organized, they train themselves in fight techniques, and some of their members work in security service companies - the army and the police. Although we appreciate the work of the police and other authorities, we think that until tragic events like this become more common, proper attention will not become dedicated to this issue," Milo said.

People Against Racism called on Interior Minister Vladimír Palko to make the fight against hate crimes and extremist movements top priority and proposed measures on how authorities could prevent and deal with them.

According to estimates, there are 3,000 skinheads in Slovakia, of which 200 are considered radical.

In other skinhead attacks between Monday, October 31 and Tuesday, November 1, two young men described by Milo as "punkers" were attacked by a group of neo-Nazis in the centre of Bratislava.

"This proves that neo-Nazism and its followers are here and ready to threaten peoples' lives just because of their appearance, skin colour or convictions," said Milo.

Alena Toševová, Bratislava police spokeswoman, told The Slovak Spectator that the police department was busy investigating the Tupý murder. She insisted that they would bring "all its powers and resources" to the case. She would not provide further details.

"Until the closure of the investigation, we will not provide any further information about the case," she said.

Tupý's murderer or murderers face up to 15 years in jail if and when convicted.

"Controls were carried out over the weekend in the city centre and in surrounding towns. Bars were also controlled [by police]. Police also intervened on November 5 at the Slovak football stadium and took 10 people to police stations. These people were carrying guns and knives with them. We will not speak about the further concrete measures we are taking in regards to curbing violent crime. These measures will be effective as long as the situation requires it," Toševová said.

Forty-one people were taken to stations; around 200 were questioned.

IN DIRECT response to Daniel Tupý's murder, local musicians and performers as well as media personalities and politicians have promised to take part in a concert to publicly denounce skinhead violence and oppose the neo-Nazi movement.
The concert is scheduled for November 12 at Tyršovo nábrežie, where the 21-year-old university student was murdered by a band of skinheads.
All participants are donating their talents and equipment, and the concert is being held free of charge.
"We are organizing this event because concerts in general are about peace and understanding, good times and feeling well. Apart from that, Daniel was a musician, so we thought music had an appropriate place," said Michal Kaščák, one of the concert organizers.
Le Payaco, a popular Bratislava rock band that is in the line up for the concert, said they considered skinhead attacks "repulsive".
"They are cowards who attack in packs like dogs, jumping armed from behind a tree at unaware and helpless victims," said a Le Payaco band member.
"We think it is terrifying that the murder took place on a Friday night when young people want to go out and have fun. We don't want to be paranoid to go out, fearing that any one of us can be attacked or even killed.
"We want skinheads out of here," he said.