NEW Citizen's Alliance (ANO) Chairman Pavol Rusko submitted a videotape to police on November 9 that reopens the debate on whether the minority government is buying its deputy support. 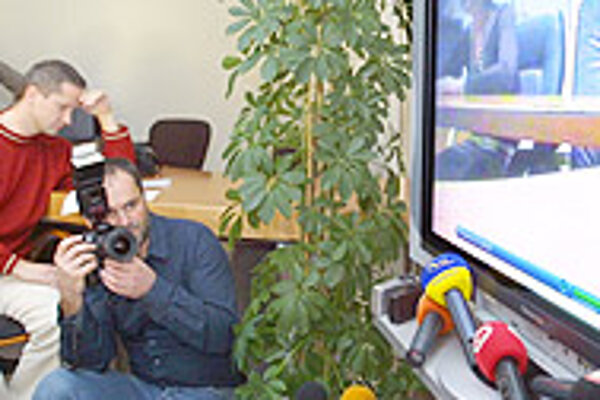 Font size:A-|A+0
NEW Citizen's Alliance (ANO) Chairman Pavol Rusko submitted a videotape to police on November 9 that reopens the debate on whether the minority government is buying its deputy support.

The tape, secretly recorded at ANO headquarters on October 23, reportedly features a conversation between the ex-Economy Minister Rusko and former ANO deputy Iveta Henzélyová, who describes how she was approached and offered money to join the ruling coalition.

Henzélyová supported Rusko during a political scandal that eventually cost the ANO boss his ministerial post. However, in early October, Henzélyová left Rusko's leadership to support the ruling coalition as an independent deputy.

Henzélyová's instant reaction to the tape was denial, saying she did not speak to Rusko. Later, she modified her response, suggesting the recording was not authentic.

In the video, Henzélyová, or someone resembling her, does not name the person who approaches her. The figure says: "[It was] not our people, that would have been too eye-catching. Someone did it on their behalf." The deputy then claims that she refused to take the money.

In an interview with the daily SME on November 10, MP Henzélyová denied telling Rusko that anyone approached her with the intention to buy her support. She said she would sue Rusko for libel and for forging the recording.

According to the daily SME, Henzélyová spoke with Rusko on October 23 to tell him why she was leaving the ANO. The recording suggests that she refused taking money from someone and that she accepted an offer for an unspecified project.

Leader of the opposition party Smer, Robert Fico, immediately described the videotape as proof of the "most serious crisis of the democratic system from the [Mikuláš] Dzurinda government".

Leaders of the ruling coalition parties, however, are not overly concerned.

Hungarian Coalition Party (SMK) Chairman and Deputy Speaker of Parliament Béla Bugár said he found it peculiar that although the recording was created two weeks ago, Rusko submitted it to the police only now.

Speaker of Parliament Pavol Hrušovský said that the evidence is illegal and that the ruling coalition sees no reason for the videotape to instigate the fall of the government.

On September 21, after more than a week of crisis, the ruling coalition managed to muster sufficient support to open the parliamentary session with 77 MPs presenting themselves.

Numerous speculations emerged on the "price" that the coalition had to pay to gain support from independent MPs in parliament.

The coalition demanded that Fico produce proof of his statements and present it to the respective authorities in charge of investigating corruption alleg-ations at once.

The surprise departure of two opposition MPs from the Movement for a Democratic Slovakia (HZDS) in favour of the pro-coalition New Citizen's Alliance (ANO) caucus prompted speculation that the HZDS had forged a deal with Prime Minister Mikuláš Dzurinda's party to help the ruling parties stay in power.

According to Fico, the departure of Eduard Kolesár and Karol Džupa, both staunch supporters of the authoritative HZDS leader, Vladimír Mečiar, to the ruling coalition was "proof of proofs" that MPs were being bought in parliament. He called on Dzurinda's coalition partners, the Christian Democratic Movement (KDH) and the SMK, to make it clear whether they supported this "style" of politics.

According to a poll by the Markant polling agency conducted in early October, 69.7 percent of those polled suspected that the ruling coalition was buying the votes of deputies to gain a majority in parliament. Only 12.8 percent believed that there were no corrupt proceedings around the voting.